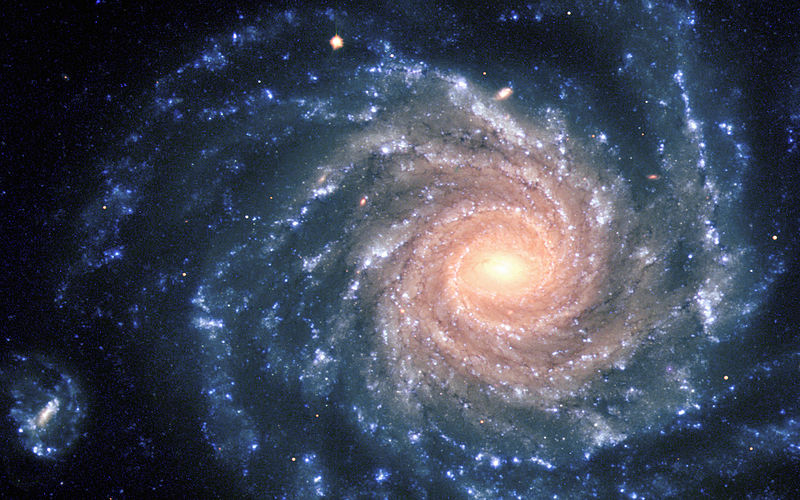 There is a theory of the universe known as fractal cosmology and it says that the structure of the universe is fractal. A fractal is a geometric pattern that is self-similar, meaning that the whole pattern is contained within its parts. In other words, if you zoom into any part of the pattern, it looks the same. Similar patterns recur at progressively smaller scales. Fractals, as mathematical entities, are infinite. This means that you could keep zooming into the shape and never reach an end to it. This is certainly the case with computer-generated fractals.

However, many deny that the same is true with real life fractal objects. Fractal geometry can describe many natural forms – trees, plants, lightning, clouds, rivers, crystals, blood vessels, veins, mountains, the brain, snowflakes, shorelines, lungs, animal and human anatomy, and many other natural forms. Fractals are everywhere. According to our current understanding of fundamental physics, while many natural forms are fractal, in that they are self-similar, they are not infinite. If you keep zooming into them you will eventually reach something which is fundamental, something which cannot be broken apart or zoomed into any further.

The point at which you reach this fundamental base is known as the Planck scale, named after the German physicist Max Planck, who introduced quantum theory into the world of physics. Below this scale, the quantum effects of gravity become strong and our current descriptions of sub-atomic particles break down. We do not currently have a theory which can successfully describe gravity at this quantum level – we have yet to unify Einstein’s general relativity (our current understanding of gravity) with quantum mechanics.

In addition, the Planck scale is the limit below which the very notions of space and length cease to exist. Quantum indeterminacy rules at this level. There is both an ontological and epistemic uncertainty about the properties of matter at this scale – the position and velocity of sub-atomic particles, for example, cannot be determined simultaneously. This is also known as Heisenberg’s Uncertainty Principle. Examining shorter scales than the Planck scale, through higher energy collisions, would theoretically result in the production of black holes.

Nevertheless, even if the Planck scale does prevent matter being infinite like computer-generated fractals, the universe could still have a fractal structure like other real-life fractal objects. The Italian physicist Luciano Pietronero and his team first gave a fractal description of the universe in 1987, in a paper entitled The Fractal Structure of the Universe: Correlations of Galaxies and Clusters. In a subsequent paper, Pietronero argued that the universe shows a definite fractal aspect, over a fairly wide range of scales. What this means is that the distribution of matter looks the same on different scales.

A very clear picture of the fractal universe is shown by the Millennium Simulation. This now famous computer simulation shows the distribution of dark matter in the universe. Dark matter is matter which does not emit or absorb light, making it essentially invisible to our telescopes. By zooming in on a massive cluster of galaxies, the movie highlights the self-similar structure of the universe. What is even more fascinating is how certain snapshots look strangely similar to the structure of a brain cell. Nature, for whatever reason, seems inclined to be fractal, manifesting in both the evolution of the cosmos and the evolution of lifeforms contained in the cosmos. Hermes Trismegistus, the founder of the philosophical school of Hermeticism, is famous for saying: “Know then the Greatest Secret of the Universe: As Above, So Below – As Within, So Without”. The quote is taken from his book, the Emerald Tablet and in it, Hermes expounds the idea that there is a correspondence between macrocosm (the big) and microcosm (the small). Hermes would have been thrilled to have seen the correspondence between the structure of the brain and the structure of the universe – it seems to support the claim “As Within, So Without”.

An even more mind-boggling fractal view of the universe is described here by Carl Sagan. In this segment, he offers the speculative idea that our universe may be but an electron in another much larger universe. Likewise, electrons in our own universe may themselves contain whole universes. This is kind of like a fractal theory of the multiverse. As opposed to having multiple universes existing side-by-side in some sort of giant superstructure, multiple universes exist at different scales. So instead of there being elementary particles and nothing smaller – or some fundamental constituent of all matter (such as ‘strings’) – there are innumerable universes contained within the elementary particles in each universe. This is the fractal multiverse. And it could even be infinite – you could zoom into an object and you would be zooming into universe after universe forever. It’s quite hard to wrap your head around the idea. William Blake expressed a similar idea in his poem Auguries of Innocence, the first stanza of which reads:

To see a world in a grain of sand
And a heaven in a wild flower,
Hold infinity in the palm of your hand,
And eternity in an hour.

Indeed, according to this fractal model of the universe, contained in each grain of sand you hold is a whole other universe. Yet, as poetic and incredible this idea is, it has been disputed by many. A fairly recent study by Morag Scrimgeour and her team from the University of Western Australia revealed that if you zoom out far enough, the large-scale structure of the universe is cluster-free. This contradicts the fractal view of the universe which says that the large-scale should correspond to the small-scale. But according to this survey of the data, there are not clusters within clusters. Overall the universe is smooth, rather than rough and lumpy, with matter distributed pretty much evenly. This is consistent with many theories of cosmology. A fractal universe, on the other hand, would cast doubt on many of these theories.

Nevertheless, this study isn’t the final word on the matter. The results may be contradicted by an even larger survey of galaxies. After all, Scrimgeour’s work does not rule out clustering at truly epic scales. The idea of a fractal universe is controversial and few people support it. However, it is still an interesting view of reality which cannot necessarily be ruled out. Here is some further reading on the topic – an article titled Is the Universe a Fractal? which appeared in New Scientist in 2007. The idea has also been detailed in a book titled Discovery of Cosmic Fractals (2002) by Yurij Baryshev.

In addition, an article written by the physicist Andrei Linde, called The Self-Reproducing Inflationary Universe, describes the universe as a self-generating fractal that sprouts other universes. Linde writes: “…eternal inflation, keeps going as a chain reaction, producing a fractal-like pattern of universes.” Eternal inflation is Linde’s re-interpretation of inflationary theory. Inflationary theory says that after the Big Bang there was a period of rapid exponential expansion, while eternal inflation adds that universes are forever inflating out of other universes. This leads to an infinite number of bubble universes, where each universe may have wildly different laws and physical constants. Our universe may simply be one branch of this “cosmic tree”, as Linde puts it.