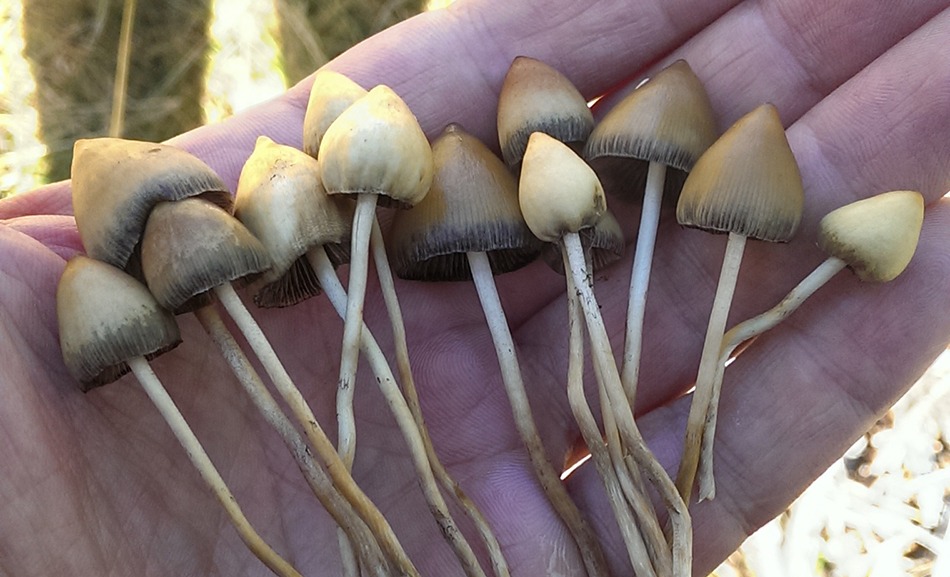 This article is based on a lecture entitled ‘fMRI and MEG Studies With Psilocybin’, from ‘A Discussion on Scientific Research with Psychedelic Drugs’, a conference chaired by Professor David Nutt at Imperial College London (12/06/2013).

Researcher Robin Carhart-Harris begins this lecture by pointing out that psilocin, a psychedelic alkaloid found in magic mushrooms along with psilocybin, is structurally similar to DMT.

Carhart-Harris’ brain imaging studies have found that psilocybin can decrease activity in the region of the brain which is overactive in patients suffering from depression. Carhart-Harris says that this physical effect on the brain can be achieved in other ways as well. Meditation and sleep deprivation can reduce activity in this overactive brain region as well, suggesting that these are also reliable ways to treat depression (although sleep deprivation is probably not the healthiest anti-depressant). Ketamine, the anaesthetic and psychedelic, is also effective as a short-term anti-depressant. Carhart-Harris is confident, however, that psilocybin can have long-term benefits for patients suffering from depression.

In support of the idea that depression is due to an over-activation or over-stimulation of a brain region, as opposed to a dampening of it, Carhart-Harris refers to psychologist William James commenting on his own depression: “It is a positive and active anguish…”

We desperately need to look into alternative treatments for depression, treatments which do not carry the nasty and often life-threatening side effects of commonly prescribed anti-depressants. Dr Carhart-Harris reminds us of the anecdotal evidence of anti-depressants such as SSRIs, Seroquel and Xanax which can result in suicidal thoughts.

Based on the brain scans of patients with depression, it was found that patients with the most pessimism in their depression had the highest concentration of 5-H2AR serotonin receptors.

Dr Carhart-Harris draws our attention to the fact that there is a decrease in brain network activity is also found in schizophrenia, early psychosis and meditation (especially a form of meditation known as non-dual meditation, the aim of which is to break down the boundary between the interior and the exterior. This suggests that psychedelics experiences, psychosis and meditation all have a similar physical basis in the brain.

The brain imaging studies revealed that the disintegration of the ego – or ego death – is correlated with decreases in alpha wave activity in the brain. If you want more ego death, then you need fewer alpha waves.

Dr Carhart-Harris towards the end of his lecture then introduces an interesting and novel way to look at different levels of consciousness. He uses the concept of entropy in order to explain how altered states of consciousness are achieved. The concept is usually used by physicists in the context of thermodynamics and it is often taken to be a measure of disorder or disorganisation. Carhart-Harris claims that waking consciousness is the “sweet spot” between high entropy (lots of disorder) and low entropy (lots of order). Disorder and order here refer to the level of organisation in the brain. The psychedelic state, then, is more towards the end of high entropy, even though psychedelic experiences can feel as though they are organised and coherent. On the other hand, evidence for the disorganised brain state at the basis of psychedelic experiences is suggested by how difficult it is to complete normal tasks and functions while under the chemical’s influence.

Carhart-Harris characterises high entropy in terms of chaos, noise and more freedom, while he characterises low entropy in terms of organisation and less freedom. Other states of consciousness caused by high entropy in the brain would include REM sleep, early psychosis and creativity; while those caused by low entropy would include coma, deep sleep, depression, OCD, and addiction. Carhart-Harris asks if entropy could be mediated by 5-HT2AR? If it is, this would be similar to Nutt’s speculation that psychosis could be a result of an endogenous release of too much serotonin. In any case, Carhart-Harris thinks that psilocybin has a great deal of therapeutic potential because it can take the brain away from unhealthy organisation. Studies into this chemical’s effect on the brain are essential, and more should be funded, especially since negative responses in Carhart-Harris’ study were uncommon, with absolutely no ‘bad trips’ reported.