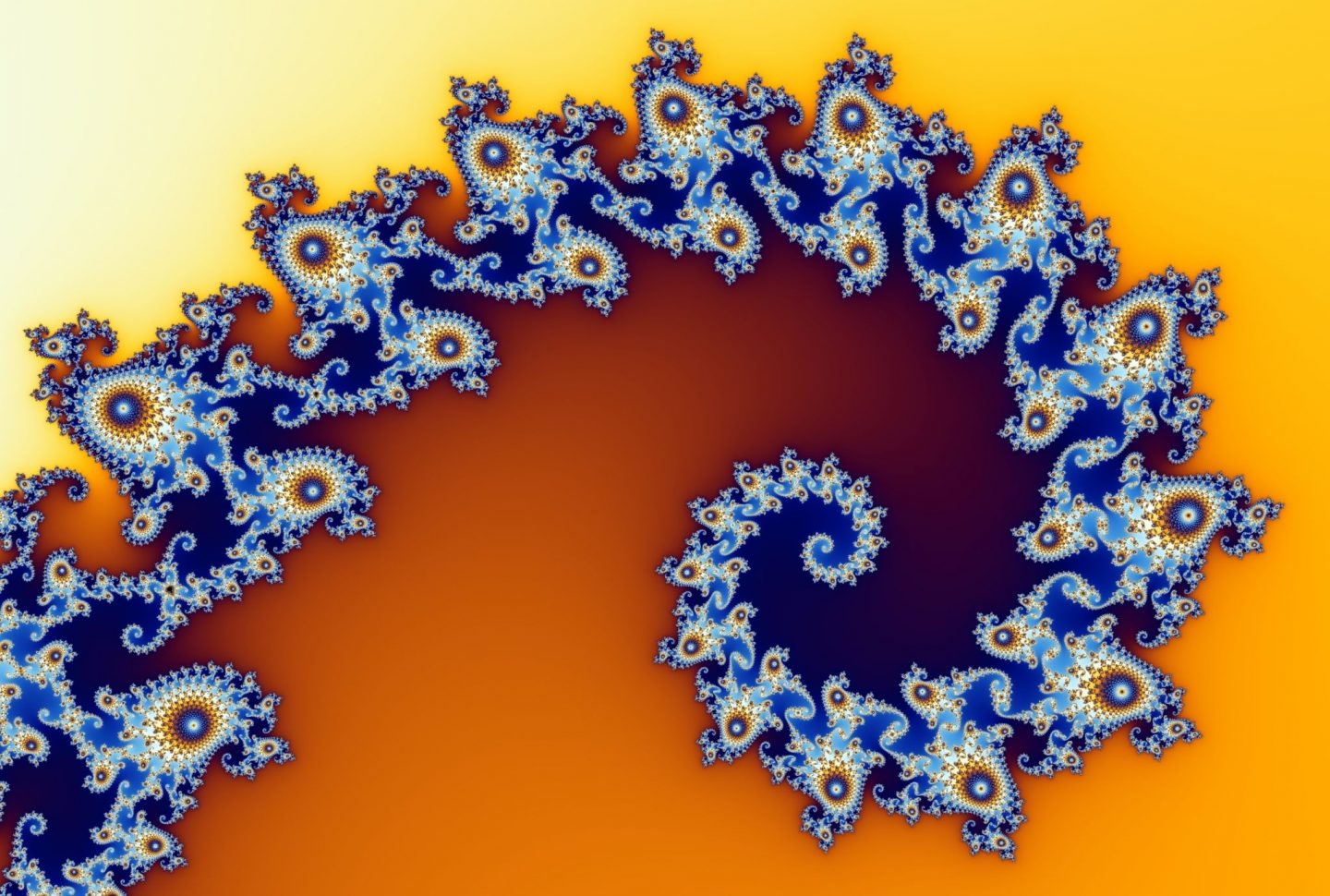 This article is based on a lecture delivered by Professor Jack Cowan at an event entitled ‘A Discussion on Scientific Research with Psychedelic Drugs’ (the conference was chaired by Professor David Nutt at Imperial College London, 12/06/2013).

There are many causes of geometric hallucinations, including:

Professor Jack Cowan says that two of the most inspiring intellectuals he has studied have been Claude Shannon (known as the “father of information theory”) and Alan Turing (known as the father of computer science and artificial intelligence). One paper which influenced Cowan’s model of how geometric hallucinations occur is his Turing’s 1952 paper, The Chemical Basis of Morphogenesis. In this paper, he shows how the stripes on a tiger and the spots on a leopard can naturally occur. These patterns are the result of the interaction of two chemicals that spread throughout a system, like how a gas spreads throughout a box. The difference, however, is that the chemicals, which Turing calls morphogens, spread at different rates. One can be seen as the activator which expresses a particular quality (e.g. a blob or a stripe) and the other can be seen as an inhibitor (preventing the particular quality from being expressed).

Whether this explanation for patterns in nature is valid remains to be seen. Some say it is a bit too simplistic. In any case, Cowan argues that this Turing mechanism of diffusion and inhibition can be used to explain how visual geometric hallucinations result from brain activity. If neurons can be described mathematically in terms of “activators” and “inhibitors”, then that could explain why we see recurring patterns when we hallucinate.

Cowan believes that we should keep R. Mourgue’s (1932) words in mind: “The hallucination…is not a static process but a dynamic process, the instability of which reflects an instability in its condition of origin.” 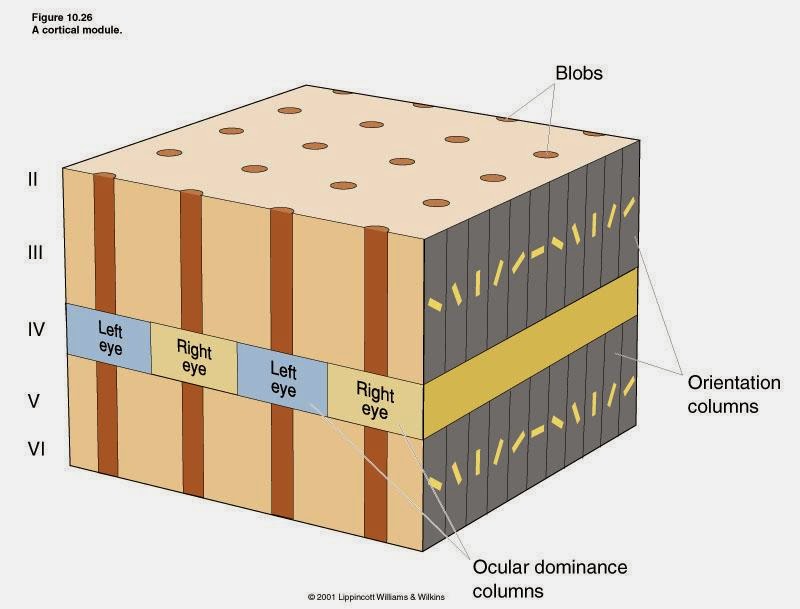 The architecture of the brain is also fractal by nature – the same patterns are repeated at different scales of size. This could, therefore, explain why fractal hallucinations are reported by those who take psychedelic drugs. Medical researcher Robin Carhart-Harris has commented on this, saying: “Like tree branches, the brain recapitulates. You are not seeing the cells themselves, but the way they’re organised – as if the brain is revealing itself to itself.” So, if you ever start hallucinating fractal geometry, that means you’re getting a good look at how your brain is structured.

Professor Cowan goes on to discuss cave art and how some of the geometric patterns drawn on the cave walls are signs of hallucinations. He refers to the work of archaeologist David Lewis-Williams who, in his book The Mind in the Cave, argues that the blob, dot and lattice patterns in the Chauvet cave are hallucinatory in nature. He argues that the hallucinations could have been the result of being in a dark cave with a flickering light, such as a fire. It has already been established by scientists, such as Purkinje, that a flickering light is capable of producing geometric hallucinations.

Cowan then goes on to discuss entoptic forms (Tyler, 1978) which are the basic visual patterns that come from the eye or brain itself. Lewis-Williams claims that entoptic forms can be found in San Bushmen rock art and Paleolithic rock art. Funnel and spiral images generated by LSD were studied by Oster (1970), whose study was based on his own experiences, and by Siegel (1977), whose study was based on the experiences of his subjects. The images they produced were extremely similar, suggesting that the geometric hallucinations generated by LSD are universal, and can, therefore, be attributed to an identifiable process in the brain. Just as Carhart-Harris has argued, hallucinating geometry is the experience of seeing the structure of your brain. 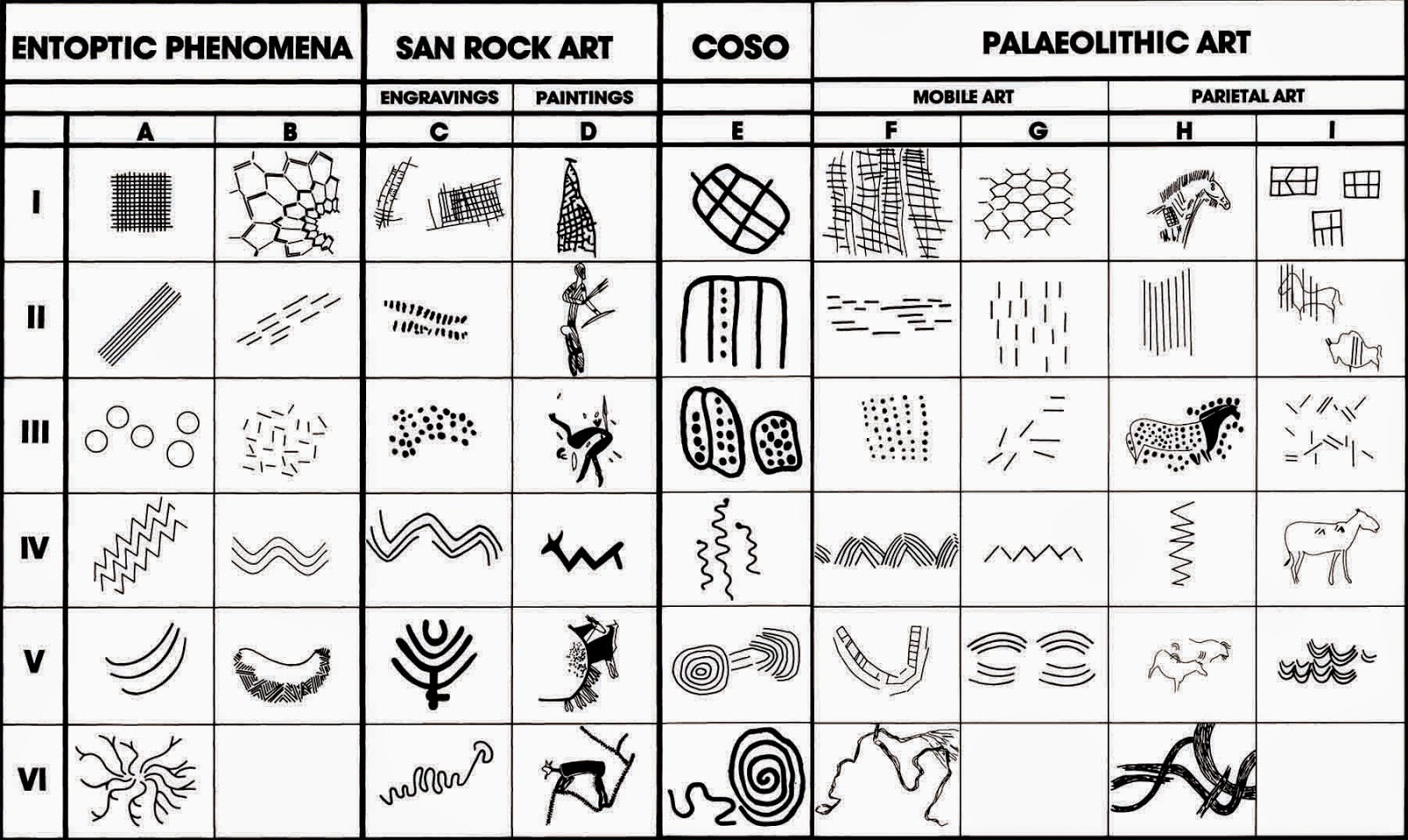 Heinrich Kluver, in Mechanisms of Hallucination (1942), organised entoptic forms into 4 classes which he called form constants. According to Kluver, all geometric hallucinations should fit into one of these categories. They are (1) Tunnels and funnels, (2) Spirals, (3) Lattices, honeycombs and checkerboards, and (4) Cobwebs.

A 1959 research paper by David Hubel and Torsten Wiesel found that there were neurons specialised for the detection of lines, orientation, corners and edges in the brains of cats. The famous neurologist and psychiatrist Oliver Sacks suggests in his book, Hallucinations (2012), that if these neurons in humans are stimulated by a psychedelic drug, geometric hallucinations can be generated.