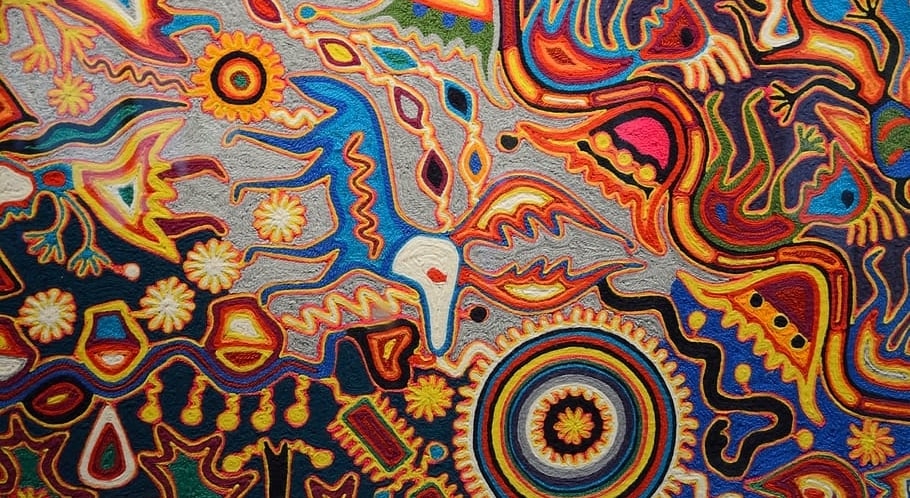 It is clear that expectations and beliefs can shape a psychedelic experience. Your ‘set’ (or mindset) is one of the vital components – along with your external setting – that can steer your psychedelic journey in a certain direction, colour it with a certain emotional tone and significance. I don’t wish to explicate all the ways in which set influences a psychedelic experience, as that has been covered widely elsewhere; instead, I would like to revisit an earlier article I wrote, where I argued that when you see specific motifs and patterns when taking a specific psychedelic, it’s more likely this is down to the unique quality of the psychedelic than the cultural associations of a compound, which you bring to the experience.

Contemplating this question further, it seems that, in the context of the visual aspect of the psychedelic experience, cultural associations often play an influential role. It is true that you can find distinct visual patterns, motifs, and artwork associated with specific psychedelic compounds (like in the case of peyote art) – and anecdotal reports of trips more or less corroborate the unique visual qualities of such compounds. However, a more nuanced view has to acknowledge that the pre-formed ideas and knowledge we have about a compound can change the visual quality of the experience. Culturally specific motifs, imagery, and iconography do not arise out of a vacuum.

The Cultural Associations of Psychedelic Mushrooms, Mescaline, and DMT

The Swiss chemist Albert Hofmann, who first synthesised LSD, provides an enlightening example of how knowledge of the cultural associations of psychedelic mushrooms can colour an experience involving them. One day, Hofmann consumed some mushrooms belonging to the species Psilocybe mexicana, known to the Aztecs as teonanactl (meaning “divine mushroom” or “flesh of the gods” in the Aztec Nahuatl language). Both the ancient Maya and Aztec people consumed psychedelic mushrooms for ceremonial purposes. Hofmann recounts his experience with Psilocybe mexicana in The Botany and Chemistry of Hallucinogens (1973):

As I was perfectly aware that my knowledge of the Mexican origin of the mushrooms would lead me to imagine only Mexican scenery, I tried deliberately to look on my environment as I knew it normally. But all voluntary efforts to look at things in their customary forms and colours proved ineffective. Whether my eyes were closed or open, I saw only Mexican motifs and colours. When the doctor supervising the experiment bent over me to check my blood pressure, he was transformed into an Aztec priest, and I would not have been astonished if he had drawn an obsidian knife. In spite of the seriousness of the situation, it amused me to see how the Germanic face of my colleague had acquired a purely Indian expression. At the peak of the intoxication, about 1​ ½ hours after ingestion of the mushrooms, the rush of interior pictures, mostly changing in shape and colour, reached such an alarming degree that I feared I would be torn into this whirlpool of form and colour and would dissolve. After about six hours, the dream came to an end. Subjectively, I had no idea how long this condition had lasted. I felt my return to everyday reality to be a happy return from a strange, fantastic but quite really experienced world into an old and familiar home.

It is very possible that awareness – even a vague awareness – of the Maya and Aztec associations with psychedelic mushrooms could manifest during a trip, like it did for Hofmann, as well as in the cases of seeing Maya and Aztec-esque patterns, imagery, scenes, and visions. This would operate unconsciously, of course. Similarly, if you are aware that mescaline and the cacti which contain it (e.g. peyote and San Pedro) were a part of Mesoamerican and Native American cultures, then experiences with either mescaline or a mescaline-containing cactus could feature motifs and imagery deemed connected to such cultures. Here we can state, however, that such visual features need not be wholly caused by knowledge and memories linked to these cultural associations – the unique visual qualities of a compound can manifest alongside projections from the unconscious.

Beyond the visual aspects, mescaline and mescaline-containing cacti are also culturally associated with a male presence (for example, the San Pedro cactus, called ‘Huachuma’ in South America, is also referred to as ‘the Grandfather’; and in Carlos Castaneda’s book The Teachings of Don Juan, the Yaqui Indian sorcerer Don Juan Matus talks about Mescalito, a distinctly masculine deity, teacher, and protector that is equated with peyote). Mescaline is thus commonly linked to masculine energy. And it is possible that this culture surrounding mescaline may influence people’s experiences with mescaline and psychedelic cacti, making it more likely for the perception of a male presence or male figures to arise. However, a specific psychedelic like mescaline is not always neatly ‘masculine’ – many people’s experiences with this compound can also involve the subjective sense of a feminine presence or energy, or the perception of female figures.

The cultural associations of DMT are much more recent than those of psilocybin mushrooms and mescaline, but this doesn’t mean those who use DMT don’t become intimately acquainted with them before entering the DMT realm. In fact, a great number of people absorb the riveting tales from psychonaut and lecturer Terence McKenna about DMT before trying the substance. One of McKenna’s recurring and distinctive features of his DMT experiences – which many fellow psychonauts become captivated by – are the DMT elves.

Stories of encounters with these DMT entities, as well as other commonly reported ones, such as jesters, may unconsciously cause these entities or similar entities to manifest during a psychedelic experience, based on memories of listening to McKenna and the expectation or wish that such entities will appear. Again, this does not mean that entities reappearing in multiple trips for one individual – or in different trips between different individuals – is solely due to unconscious projection; pre-existing archetypes in our collective unconscious can be responsible too.

Meanwhile, DMT-containing ayahuasca is culturally tied to a feminine presence. The Napu Runa, an indigenous people of the Ecuadorian Amazon, refer to ayahuasca as “the mother of all plants”. Moreover, Westerners will often refer to this psychedelic brew as ‘Mother Ayahuasca’ or as ‘the Grandmother’ (in contrast to mescaline). But if Westerners view ayahuasca as having a feminine spirit or energy to it, could this play a role in the common experience of encountering a feminine or motherly presence during the experience? It’s difficult to know how the culture, beliefs, and expectations linked to ayahuasca shape the experience, yet at the same time, most people don’t sit down to drink ayahuasca with no pre-conceived ideas about it. Indeed, given ayahuasca’s connotations with femininity, as seen in indigenous belief systems and in Western ayahuasca circles and Western culture, these connotations could end up influencing an individual’s ayahuasca experience. One can, however, also experience a male or fatherly presence under the influence of ayahuasca. Psychedelic experiences don’t always fit in with a black-and-white cultural narrative.

I came across a fascinating article about how culture influences psychedelic trips, written by the philosopher Jules Evans. In his piece, Evans draws on some of the discoveries presented by the cultural historian Mike Jay in his recently published book Mescaline: A Global History of the First Psychedelic. As part of is elucidation of the mescaline experience, Jay contrasts the experiences of indigenous peoples in the Americas with San Pedro and peyote and Westerners’ experiences with the pure mescaline compound. In his article on the subject, Evans writes:

Jay argues that indigenous people’s psychedelic experiences are embedded in rituals passed through generations, in which the meaning of the experience is largely collective and relational, centred on the relationship with the spirit-teachers of Peyote, San Pedro, and other psychoactive plants. Westerners, meanwhile, have had a more scientific and instrumental engagement with a drug — mescaline — refined and extracted from the plants. We have tried to discover its properties. How does the drug behave? But the drug won’t behave. What we find, instead, over the last century, is a bewildering assortment of private experiences, from mild content to white-knuckle horror. Western psychonauts ‘are seeking to discover, construct or invent a framework of meaning’ and ‘their reports are extravagantly diverse’. The nature of the chemical-spirit is not fixed in accepted rituals, but is sort of a free radical, reflecting back to us our individualized, rootless, restless culture.

Jay further juxtaposes indigenous experiences with those of Westerners by highlighting how the latter’s reports of mescaline experiences were focused on the fantastic display of visions and colours produced by the drug. On the other hand, as Evans points out, indigenous cultures were less concerned with the visions or ‘fireworks display’ aspect of the experience, placing greater importance on the insights gained. Also dissimilar from indigenous experiences were Westerners’ unpleasant and overwhelmingly negative trips. (As a side note, Evans does raise the issue that we are generally less aware of what indigenous trips are like, since they are not written down, and moreover we don’t know if indigenous peoples never have so-called ‘bad trips’ – they may just be interpreted differently.)

The American ethnologist James Mooney, who worked for the Smithsonian Institution in the 1890s, was given a supply of peyote buttons from Quanah Parker, a Comanche chief (leader of the Comanche Nation, a Native American nation from the Great Plains). Mooney experimented with these peyote buttons, as did notable scientists, including neurologist Weir Mitchell and the psychologist William James. Scientists also used these buttons supplied by Mooney in some of the very first psychedelic studies in the West (although they were by no means rigorous studies like those that are designed and implemented today). Interestingly, Jay notes:

To Mooney, if not to the doctors and chemists, one point was obvious: the experiences that they and their subjects were having were quite different from those of any traditional peyotist. The ‘horrible visions and gloomy depression’ reported under medical supervision were ‘entirely foreign to my experience or that of any Indian with whom I have talked’. As he explained, ‘the Indian is familiar with the idea from earliest childhood’; peyote was not an adventure into terra incognita but a journey to the deepest source of their culture and its power. Such journeys were undertaken in a regular manner, in keeping with tradition, with plenty of time allowed afterwards to recover and integrate the experience…The trial subjects, by contrast, undertook their experiments with little idea of what to expect and no attempt to prepare their mind.

In the West, we more or less take psychedelics in the absence of a specific cultural context that helps to structure, inform, and guide the experience. This may not only make negative, chaotic, or overwhelming experiences more likely, it may also make Western trips – including positive and profound ones – harder to make sense of, find meaning or purpose in, and integrate. Nevertheless, Evans rightly asks “whether we can juxtapose western and Indian experiences so cleanly and neatly”. Perhaps we can’t justifiably make such clear distinctions, but we can still recognise the very real role that culture plays in the quality of psychedelic experiences. Both awareness of a culture different to one’s own (which is tied to a specific compound) and adherence to a particular culture can lead to some interesting subjective effects.