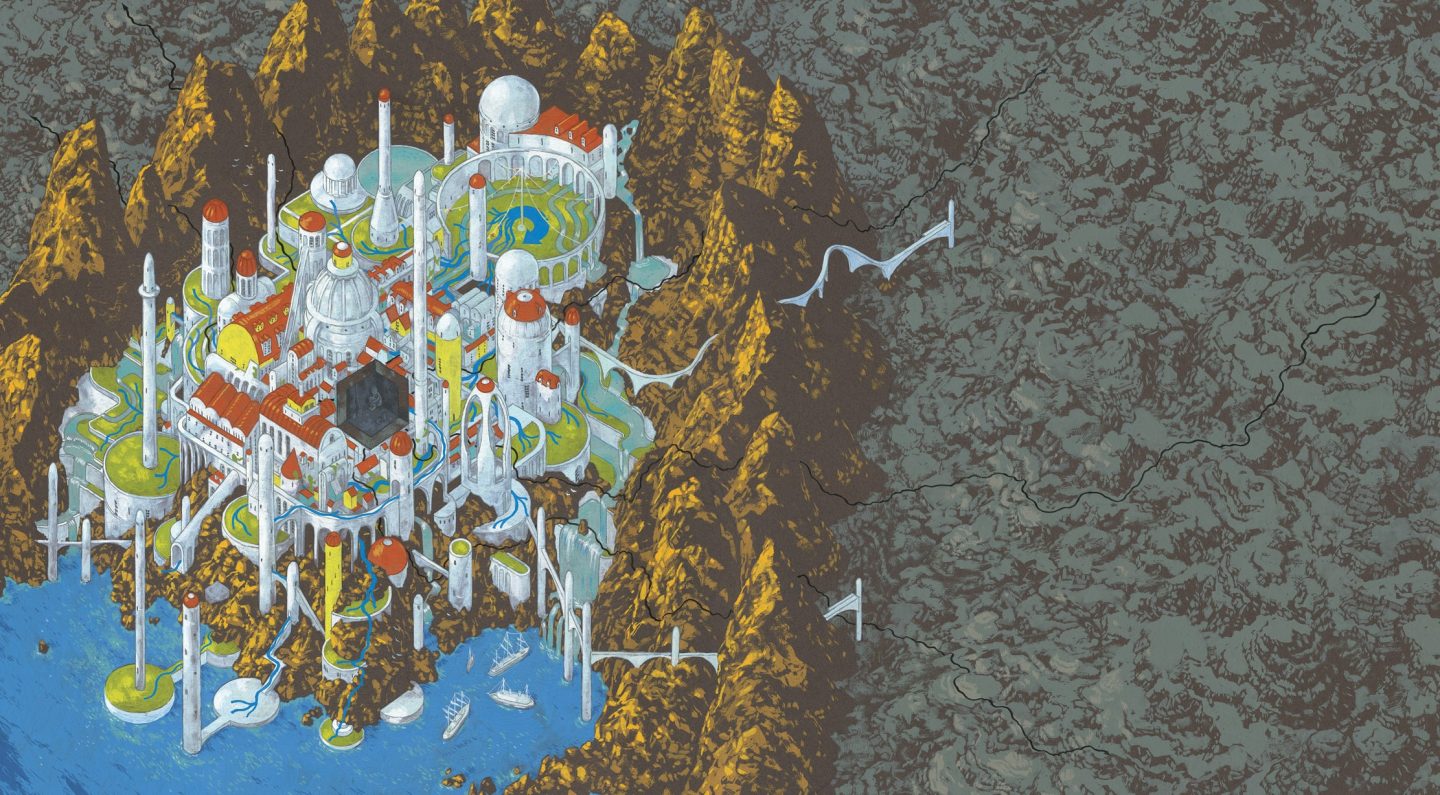 An illustrated map of the city of Omelas, created by the artist Andrew DeGraff

The Ones Who Walk Away From Omelas is a work of short philosophical fiction by the sci-fi writer Ursula K. Le Guin, originally published in 1973 and then re-republished in The Wind’s Twelve Quarters (1975), a collection of Le Guin’s short stories. This particular short story (which you can read here) describes the utopian city of Omelas, whose idyllic nature depends on the continual imprisonment, torture, suffering, and dehumanisation of a single child. If the child were granted freedom and relief from its suffering, the prosperity of Omelas would wither away.

The precise reasons for this setup are not explained, but that is somewhat irrelevant; what matters is the philosophical and ethical implications of the thought experiment: does the extreme happiness of an entire city justify the extreme suffering of a single being, which is necessary to maintain that happiness?

The citizens of Omelas can visit the room in where this child is locked away and bear witness to its tortured, isolated existence. Indeed, many citizens – including children – do visit the suffering child. Their natural reaction, of course, is one of shock and disgust. But they come to understand that this misery is the unfortunate cost of utopia, believing it justifies the happiness of the many. So they end up accepting this state of affairs and return happily to their blissful, comfortable existence.

However, a minority of visitors are unable to shake off (what they feel to be) the depraved injustice of the situation. The sight of the child and its implications force some visitors – both young and old – to reject Omelas wholesale. And so they leave the city, they voluntarily leave paradise, with the conviction that such an action is the only right thing to do. These few outliers are thus known as ‘the ones who walk away from Omelas’.

The inspiration for the story comes from an essay titled The Moral Philosopher and the Moral Life (1891), written by the American psychologist and philosopher William James. In it, James considers the following:

Or if the hypothesis were offered us of a world in which Messrs Fourier’s and Bellamy’s and Morris’s utopias should all be outdone, and millions kept permanently happy on the one simple condition that a certain lost soul on the far-off edge of things should lead a life of lonely torture, what except a sceptical and independent sort of emotion can it be which would make us immediately feel, even though an impulse arose within us to clutch at the happiness so offered, how hideous a thing would be its enjoyment when deliberately accepted as the fruit of such a bargain?

We can consider this kind of thought experiment as a sort of challenge to utilitarianism (at least act utilitarianism, which argues we should favour the action that produces the best possible results). It brings into focus the question of whether the means can justify the ends if the means involve harm to others. Interestingly, The Ones Who Walk Away From Omelas has also been used as an analogy – or argument – for antinatalism, the philosophical position that assigns a negative value to birth and, therefore, posits procreation as an immoral act. The Swiss philosopher Bruno Contestabile draws this parallel between Le Guin’s short story and antinatalism in his paper The Denial of the World from an Impartial View (2016), published in the journal Contemporary Buddhism.

Contestabile considers the Buddhist rejectionist view of the world, a philosophical position that is opposed to phenomenal existence. We can see rejectionist philosophy in Buddhism’s main focus: the achievement of nirvana in order to put an end to our suffering and to leave the wheel of reincarnation (which eternally perpetuates our suffering). Contestabile also refers to the First Noble Truth of Buddhism, which states that life is dukkha (suffering or unsatisfactoriness). Buddhism shares with negative utilitarianism (which prioritises the minimisation of suffering) the intuition that total suffering cannot be compensated by happiness.

Contestabile asks in his paper whether Buddhist rejectionism is impartial. He considers two metaphors that have the same structure (a happy majority and a suffering individual), which aim to capture, in principle, the kind of world we live in. The metaphors can then conjure up two different outlooks: the first is denying the world out of compassion, whereas the second suggests limiting compassion and affirming the world.

Contestabile believes that with an impartial perspective, “the issue of compassion is transformed into an issue of risk. After this transformation the denial of the world can be expressed in terms of uncertainty-aversion.” And his conclusion, which factors in the aforementioned metaphors, is as follows:

From a strictly hedonistic and impartial perspective it is uncertain if life’s chances outweigh the risks. There is no indisputable metric for measuring risks and no reliable forecast. Given this uncertainty the denial of the world cannot easily be dismissed as being irrational.

One of the metaphors that Contestabile refers to is, of course, The Ones Who Walk Away From Omelas. Just as I asked at the beginning of this article, Contestabile poses the question: “can the suffering of the minority be compensated by the happiness of the majority? Can the aggregated happiness compensate the extreme suffering of even a single person?” On the negative utilitarian and Buddhist account, it would appear not. Contestabile considers ‘the ones who walk away from Omelas’ as “the people who deny the world”; he associates them with Buddhist monks, “with childlessness and retreat”. Contestabile continues:

The metaphor suggests that individual happiness is ambivalent. The joy of the majority is at the cost of a suffering minority; one is not possible without the other. There is no doubt that the human suffering in this world is caused by procreation, but the relation is indirect. Parents participate in an immensely complex system of interactions and probabilities. Often a contingent event decides who becomes a victim. As a consequence, participants deny the responsibility for the results of the system – a phenomenon which is also known in the context of structural violence (Galtung). If the human race were a sympathetic race, it could walk away from Omelas. But the majority is frightened by the imagination of a world without humans and prefers a silent agreement according to which the torture of a few is tolerable.

In the case of the actual world we live in, the existence of our world and the perpetuation of it relies on the fact that many people have terrible lives. We can crudely relate the tortured child in Omelas to the millions of humans in this world who suffer intolerably: the victims of sex slavery, natural disasters, genocides, wars, starvation, painful physical illnesses, and chronic and severe mental illnesses. The happy majority in Omelas meanwhile represent those among us who consider ourselves lucky, although the Omelas scenario clearly involves less suffering and a higher preponderance of happiness than the world we find ourselves in.

The Omelas metaphor is an uncommon argument in favour of antinatalism, yet it is one that many antinatalists believe holds a great deal of weight.