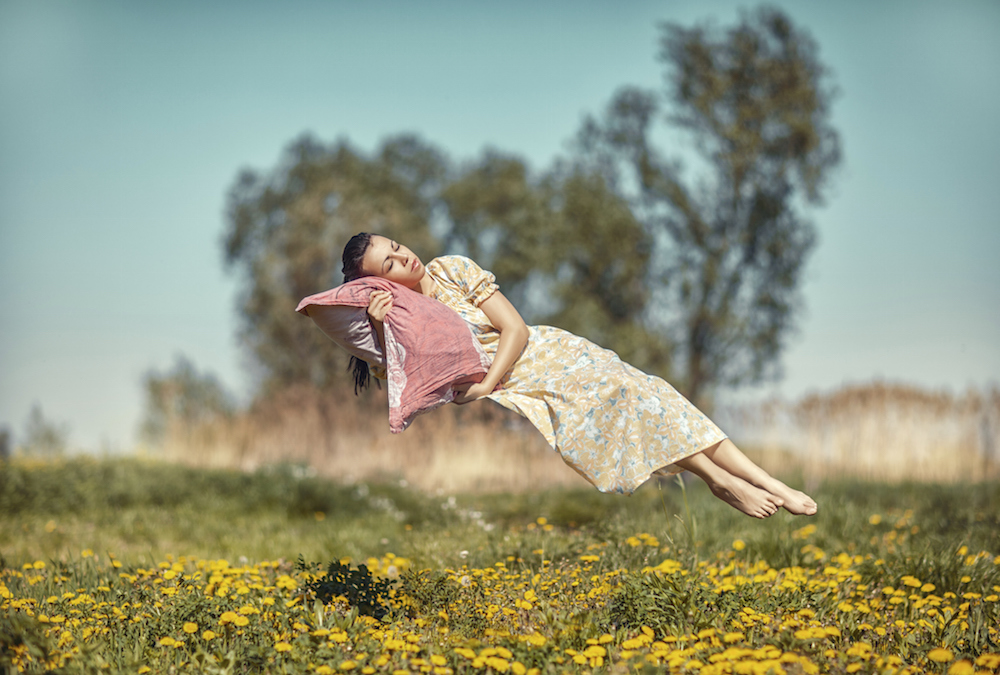 Hypnagogia is the experience you have when you are falling asleep (but not quite asleep). When you’re waking up (but not quite awake) this is known as hypnapompia. Other terms for hypnagogia include: ‘visions of half-sleep’, ‘the borderland of sleep’, ‘half-dream state’ and ‘dreamlets’. The hypnagogic state can be characterised by many sensory experiences. These experiences can range from the subtle and vague, to the downright intense and hallucinatory. It can include visions: seeing colours, shapes, faces, landscapes and other three-dimensional imagery. Unlike dreams, however, these sights have no narrative to them; that is, they do not tell a meaningful story. I experience this all the time and it usually consists of interacting with people, but with no context to it. Sometimes, the visual experience can be nightmarish, but because I am not yet fully asleep, I can ‘snap out of it’ and wrest myself back to wakefulness.

People who are involved in some activity before they fall asleep report experiencing this activity in the hypnagogic state. It is most common among people who engage in a repetitive activity before going to bed later that night. For example, people who play a lot of video games, new waiters and waitresses, chess players, telemarketers, and those who spend all day doing a particular activity (e.g. rock climbing, skiing, swimming) may experience this phenomenon. In many instances, there can be tactile hallucinations, where the person feels a part of the experience they were involved with in the day – e.g. the rock climber can feel the rockface, the person skiing can feel the snow, and the swimmer can feel the water. I have experienced this myself. One night after spending hours of telemarketing, I went to sleep, and although I wasn’t fully asleep it felt like I was back at work, taking countless calls. Definitely not an enjoyable experience!

Another aspect of the hypnagogic state is hearing sounds. Just like the visual aspect, the auditory aspect can range from slight sounds to realistic, loud noises. Common sounds heard are one’s name being called out and a loud noise or bang going off in one’s head. I’ve experienced both and it can be pretty scary. Jolted, I immediately wake up. The loud noise in one’s head has been compared to an explosion, roar, gunshot, door slamming, and loud voices or screams. The worst is when it’s a scream since it not only shocks you, but it’s especially weird to have someone else’s voice in your head. This aspect of the hypnagogic state has been called ‘exploding head syndrome’ and it can be accompanied by anxiety and an elevated heart rate. The cause of it is unknown, but some doctors say it can be associated with fatigue and stress. In the past, I have had repeated cases of it, which even made me fearful of going to sleep.

Our thought processes can also be affected. Thought processes at the edge of sleep are completely different from the thought processes we have when we are fully awake. Hypnagogic thinking is said to be characterised by more openness, illogic, nonsense, heightened suggestibility (readiness to believe something), and a more fluid association of ideas (connecting ideas in a more free-flow and unique way). Personally, I usually experience this when I’ve been falling asleep watching a documentary or when I’ve been writing or reading about a difficult subject before going to sleep. In the hypnagogic state, I am either writing about the subject or thinking about it in a radically different way. During the experience, it seems as if I am making genuine progress with a problem, without being able to arrive at a solution. It’s like wrestling with hundreds of ideas and being stuck in a kind of loop at the same time.

However, many famous people have been able to use the hypnagogic state in order to solve a problem. The scientist August Kekule, for example, realised that the structure of benzene was a closed ring while half asleep after seeing molecules turning into snakes, with one snake putting its tail in its mouth. Many other famous people have said that hypnagogia was able to enhance their creativity, including Beethoven, Wagner, Dali, William Blake, Carl Jung, Samuel Taylor Coleridge, Edison, Tesla, Newton, and many more.

References to hypnagogia go as far back as Aristotle, who spoke of the “affections we experience when sinking into slumber”. In the third century AD, the philosopher Iamblichus wrote about “voices” and “bright and tranquil light” that came to him in the “condition between sleeping and waking”. He thought that these experiences were religious in nature and influenced by God. In 1600, the astrologer Simon Forman recounted apocalyptic visions of “mountains and hills” which came rolling towards him at the point of sleep. And Edgar Allan Poe wrote about the “fancies” that he experienced “only when I am on the brink of sleep…”

Some believe that hypnagogic states, much like dreams, are not just full of meaningless junk and random images and noises. Instead, hypnagogia can be imbued with structure and meaning, and therefore be interpreted in a way to gain an understanding of the unconscious mind. One explorer of hypnagogic states was the Russian philosopher P.D. Ouspensky. In 1905, he began to study lucid dreaming, the practice of being aware that you are dreaming and being able to consciously manipulate the dream. In his studies, he realised that the best way to enter into a lucid dream was to remain aware as he drifted off to sleep. His attempts at doing this led to what he described as a “half-dream” state. In his essay On the Study of Dreams, he described his half-dream states as filling him with “astonishment” and “extraordinary joy” because he was able to see the progression from a simple change in consciousness to a fully-fledged dream. He was able to observe how dreams were created.

Ouspensky felt like watching an artist at work in these states, who was able to take the slightest bit of material and create a real adventure from it. As he describes one experience:

I am asleep. Golden dots, sparks and tiny stars appear and disappear before my eyes. These sparks and stars gradually merge into a golden net with diagonal meshes which moves slowly and regularly in rhythm with the beating of my heart… The next moment the golden net is transformed into rows of brass helmets belonging to Roman soldiers marching along the street below. I… watch them from the window of a high house in… Constantinople… I see the sun shining on their helmets. Then suddenly I detach myself from the window-sill and… fly slowly over the houses, and then over the Golden Horn in the direction of Stamboul. I smell the sea, feel the wind, the warm sun…

In 1987, the psychologist Andreas Mavromatis published his book, Hypnagogia, in which he details his studies on hypnagogia. He found that he could influence the content of someone else’s hypnagogia by changing sensory input, such as sound, light and smell. The thought processes of someone in a hypnagogic state could also be changed through verbal suggestion, by speaking to the person while they were having this half-dream experience. Mavromatis believes that hypnagogia takes place in the subcortical structures in the brain, what is commonly referred to as the ‘old brain’. The neocortex which is more evolutionary recent and more ‘human’, is associated with logical thinking. Mavromatis thinks that during hypnagogia activity in the neocortex is inhibited, whereas the ‘older brain’ carries on running. This is where you can find the subcortical structures that deal with forms of thought involving imagery, symbols and analogy.