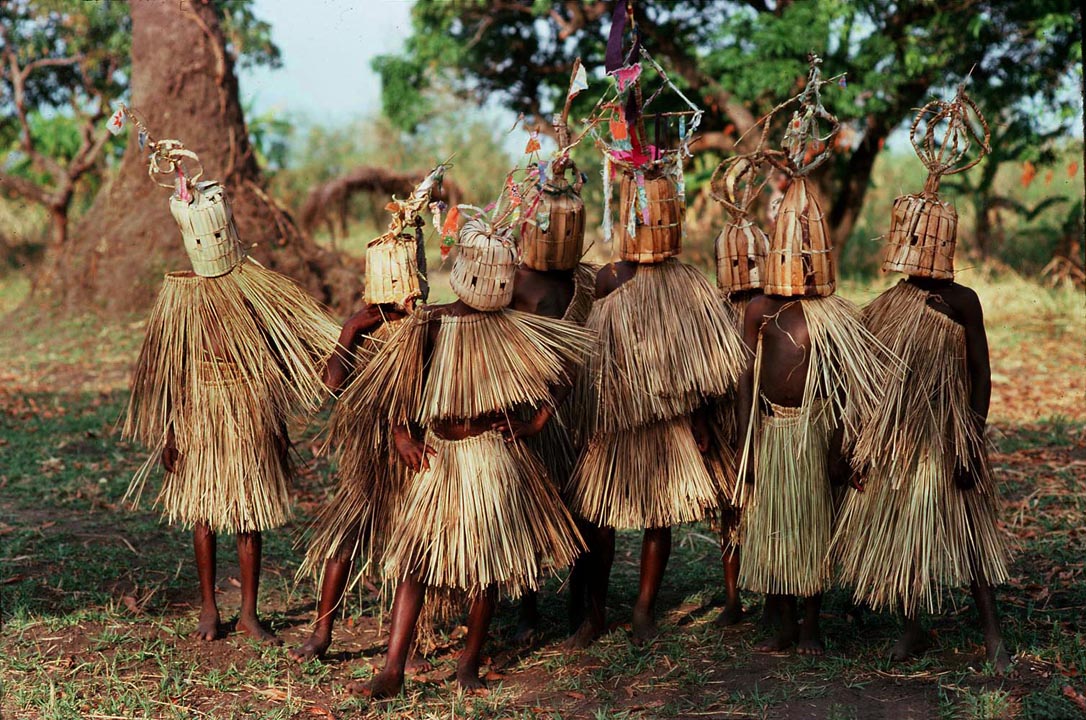 The famous historian of religion Mircea Eliade wrote about this distinction in his book Rites and Symbols of Initiation (1958). As he writes, “…in the modern Western world significant initiation is practically non-existent.” Eliade defines an initiation as a “body of rites and oral teachings whose purpose is to produce a decisive alteration in the religious and social status of the person to be initiated. In philosophical terms, initiation is equivalent to a basic change in existential; the novice emerges from his ordeal endowed with a totally different being from that which he possessed before his initiation…” ‘Puberty initiation’ is particularly important in traditional societies because it is only through such rites that an adolescent will be accepted as an adult and therefore as a responsible member of that society.

For many people living in modern society, religious initiation rites – such as baptism and the Bar Mitzvah – feel devoid of their original sacred meaning, carried out purely in the name of tradition. Initiation rites in traditional societies, on the other hand, play a key role in introducing the initiate to the spiritual values of the community. He or she learns the sacred myths and traditions of the tribe, the names of the gods and the history of their works. The initiate also learns about how the tribe possesses a mystical connection to these gods, a connection which was established at the beginning of time. Thus, these ceremonies introduce the initiate to a sense of the world as ‘sacred’, whereas for modern societies, our equivalent ceremonies are more superficial, carried out for tradition’s sake, with no real sense of the ‘sacred’ attached to the ritual.

It is not only the teaching of the group’s sacred history which imbues the novice with a sense of the sacred but also the series of ordeals they have to go through. As Eliade puts it, “And it is primarily these ordeals that constitute the religious experience of initiation – the encounter with the sacred.” The ordeals are, more often than not, symbolic of one’s death followed by one’s resurrection or rebirth. Initiation rites symbolise the death of the novice (marking the end of childhood, ignorance and the profane) as well as the rebirth of the novice (marking their return to the tribe with another mode of being). This death-rebirth ritual is also a symbolic microcosm of the society’s creation myth – the symbolic repetition of the creation myth is intended to foster the presence of the gods. In initiation rites, ‘death’ corresponds to a temporary return to the primordial Chaos out of which the universe was born, while ‘rebirth’ corresponds to the birth of the universe. Out of this symbolic re-enactment of the creation myth, a new individual is born.

Eliade highlights that “initiatory death is indispensable for the beginning of spiritual life. Its function must be understood in relation to what it prepares: birth to a higher mode of being.” Initiation rites can be viewed as an expression of the death-rebirth myth, which is ingrained in human psychology. In almost every ancient culture you will find the myth of the ‘dying-and-rising-god’ – Jesus, Buddha, Krishna, Queztalcoatl (Aztec), Osiris, Isis, Horus, Ra, Tammuz (Babylonian), Baldr (Norse), Izanami (Japanese), Dionysus, Adonis, Persephone – all died and were reborn. The famous social anthropologist, James Frazer, argued in his seminal work The Golden Bough (1890) that these death-rebirth myths are echoes of agricultural cycles: the death of vegetation in the winter and its rebirth in the spring. All religions began as fertility cults, Frazer asserts. However, as these fertility cults were abandoned, the death-rebirth myths remained, reflecting a psychological need in humans to symbolically die and be reborn into a spiritual life. Initiation rites serve as a means to achieve this.

The Swiss psychoanalyst Carl Jung argued that death and resurrection are archetypal (universal) processes which are part of the collective unconscious (the innate realm of the human mind containing archetypes – universal symbols which shape our personal experiences). For Jung, the archetypal processes of death and resurrection can be utilised in the task of psychological transformation and growth. Indeed, this is what seems to be occurring in initiation rites.

Initiation rites, especially those which involve pain and struggle, can also be viewed as expressions of Joseph Campbell’s idea of the ‘hero’s journey’. The ‘hero’s journey’ or ‘monomyth’ is a basic pattern that Campbell argued is found in many myths around the world. This universal pattern was described in detail in his famous book The Hero With a Thousand Faces (1949). Campbell summarises the monomyth in the following way: “A hero ventures forth from the world of common day into a region of supernatural wonder: fabulous forces are there encountered and a decisive victory is won: the hero comes back from this mysterious adventure with the power to bestow boons on his fellow man.”

The hero’s journey also includes a number of distinct stages, which can be applied to countless ancient myths, as well as modern stories and films. The two important stages relevant to our discussion of initiation rites is ‘A Road of Trials’ or ‘The Ordeal’ and ‘Crossing the Return Threshold’. The Road of Trials includes a series of tests, tasks or ordeals the hero must undergo in order to achieve transformation. Crossing the Return Threshold involves retaining the wisdom gained on the journey, integrating that wisdom into their lives and sharing that wisdom with the rest of the community. Initiation rites fit into the narrative of the hero’s journey because the initiate has to undergo ordeals in order to achieve spiritual and psychological transformation.

Many traditional initiation rites may seem barbaric and cruel from a Western point of view, but in light of the archetype of the monomyth, it is easy to see why they are practised. Here are some examples of some particularly painful initiation rites. These, of course, are quite extreme examples. However, the requirement to endure some physical pain or to test one’s courage is a very common feature of initiation rites in traditional societies. The modern counterpart of this would be the ‘hazing rituals’ involved in initiation into a fraternity – although such rituals are now banned on many college campuses. A good documentary on this kind of hazing is Frat House.

It is easy to draw comparisons between the struggle and test of one’s courage that comes from this kind of extreme hazing and the similar struggle involved in traditional initiation ceremonies. Both also seem to strength group affiliation and ‘brotherhood’. Initiation into a gang will often involve taking a beating by fellow gang members. The fact that initiation rites still exist in modern society, albeit devoid of sacred meaning, suggests that they are central to human psychology. There is no doubt that initiation into a fraternity, a gang or a secret society enhances group bonding and a feeling of community. This study, entitled Going to College and Unpacking Hazing (2005), for example, found that the hazing initiation ceremonies produce conformity among new members, which contributes to group solidarity. Another study, entitled The Anticipation of a Severe Initiation (2005), found that initiation increases feelings of group attraction, but only with men.

In regards to the second relevant stage of the hero’s journey, Crossing the Return Threshold, the initiate returns to the society with a newfound sense of the sacred and of belonging. It is this newly attained wisdom which allows the initiate to function as a valuable member of that society. Initiation rites are expressions of the monomyth, a narrative which is universal because it mirrors something universal and deep about human psychology – the desire for personal transformation, growth, the mastery of one’s own destiny and acceptance into the group.

As social animals, humans have depended on group affiliation for survival and today we depend on it for our own well-being. It is easy to see, then, why initiation rites are so widely practised and why they still persist in modern society. Perhaps it could be argued, however, that the loss of meaningful initiation rites in modern society partly explains why so many individuals feel isolated and cut off from any sense of community. Some writers, such as Daniel Pinchbeck, have argued that we need to regain meaningful initiation rites. Pinchbeck himself is interested in initiation rites involving psychedelic plants. In his book Breaking Open the Head (2002), he explains how cultures such as the Bwiti culture of Gabon use the hallucinogenic iboga plant in rites which allow young men to become responsible members of the community. (Pinchbeck himself participated in one of these iboga ceremonies). The ibogaine (the psychoactive chemical in iboga) experience often involves difficult physical and psychological experiences which correspond to the physical and psychological struggles of the hero’s journey. Overcoming these struggles marks the initiate’s acceptance into the group.

Ram Dass has similarly written about how modern society can benefit from such rites, in his essay Psychedelic Rites of Passage. He argues that we are a deprived society in terms of spiritual rituals and uses the example of his own Bar Mitzvah, which he said he performed mechanically and superficially, to highlight this. He also explains how the lack of psychedelic rites of passage is part of the reason why bad trips can occur in the first place – many people’s first psychedelic experiences occur in an uncontrolled and inappropriate setting without the care and support of a group. Furthermore, many people do not enter into the experience with a prepared mindset, something which is required of any initiate in a traditional society.

Aldous Huxley explores the idea of psychedelic initiation rites in his novel Island (1962) where young people on Huxley’s imaginary island prepare for a psychedelic journey and emerge from it as responsible adults. Back in the 60s, Ram Dass, Timothy Leary and Ralph Metzner wrote a book called The Psychedelic Experience (1964). They drew influence from the Tibetan Book of the Dead as a framework for guiding the psychedelic journey of death and rebirth, a theme which we know has its parallel in the initiation rites of traditional societies. Young people, who will experiment with psychedelics anyway, perhaps need more books like these. Having proper psychedelic initiation rites could minimise the risk of a negative experience, as well as allow young people to make the transition into adulthood.