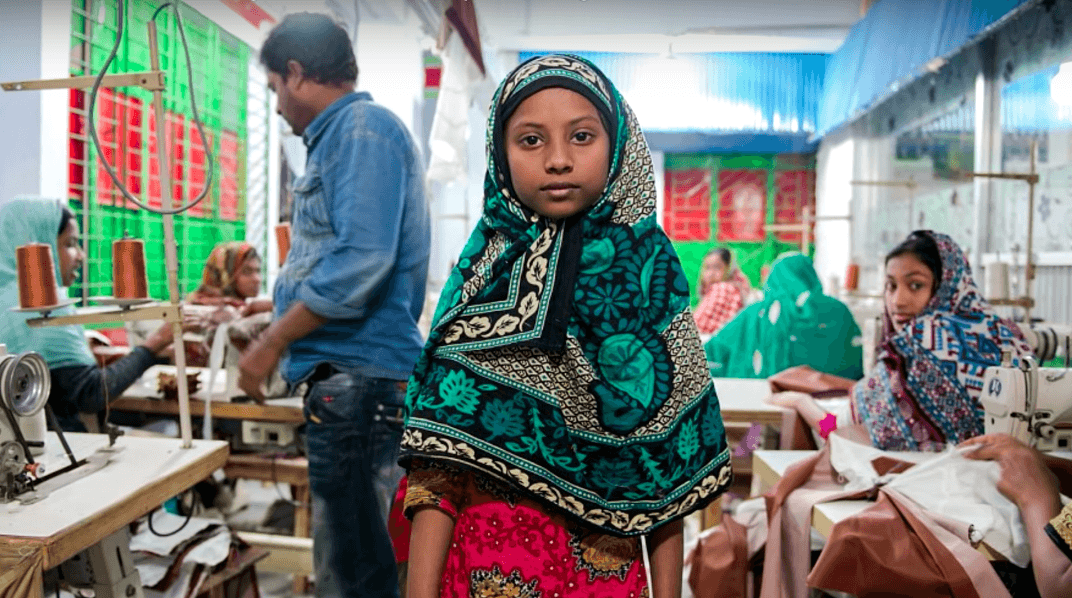 Sweatshops entail long hours with no breaks, terrible working conditions, a disgracefully low pay, abuse from employers and sometimes, worst of all, an abuse of child labour laws. Sweatshops are responsible for violating these workers’ human rights and for breaching laws relating to overtime and minimum wage. Some of the human rights that sweatshops breach, as laid out in the Universal Declaration of Human Rights, including Article 1 – “All human beings are born free and equal in dignity and rights”, Article 5 – “No one shall be subjected to torture or to cruel, inhuman or degrading treatment or punishment”, Article 23 – (2) “Everyone, without any discrimination, has the right to equal pay for equal work,” (4) “Everyone has the right to form and to join trade unions for the protection of his/her interests” and Article 24 – “Everyone has the right to rest and leisure, including reasonable limitation of working hours and periodic holidays with pay.”

In September 2012 there was the case of a clothing sweatshop factory in Karachi, Pakistan where nearly 300 workers were incinerated in a fire because the exits were designed so that the employees could not escape. There have been other cases where workers have died due to fires, and other cases where workers have died due to the factory collapsing. There is no concern for the health, safety or lives of workers in sweatshops. Cases of suicide are also rampant in sweatshop factories, particularly in Shenzhen, China. Foxconn, the world’s largest electronics outsourcing manufacturer, own 20 plants with more than 800,000 workers, making products for Apple, Sony, HP and Dell.

In the Apple sweatshop in Shenzhen, ‘suicide nets’ have even been set up outside the buildings in order to prevent more workers from killing themselves. All of the workers in these factories experience extreme stress, alienation and humiliation on a daily basis. Workers are subject to a military-style regime; they live where they work, in cramped dormitories with many freedoms taken away from them (such as having visitors). Given the psychological impact of these conditions, it is not surprising, although it is very depressing, that suicides and suicide attempts are so common among workers in these factories.

If we agree, then, that sweatshops are guilty of human rights violations and that their working conditions are unethical, then how should we react? Ultimately, we are consumers of the products that these workers make – electronics and designer clothes – so we are sponsoring these sweatshops. Does this mean that we should refuse to buy anything that has its root in a sweatshop? Companies such as Apple, Primark and Nike are also responsible for encouraging, or at least supporting, these sweatshops, so should we therefore not boycott these big businesses for the same reason? As it turns out, refusing to purchase products from sweatshops can actually do more harm than good, and boycotting companies that rely on sweatshops may not be too productive or effective either. I’ll explain why, and then offer a more beneficial alternative.

In a 1997 article for Slate, the economist Paul Krugman criticised the anti-sweatshop movement and those who boycott sweatshops, saying, “Why does the image of an Indonesian sewing sneakers for 60 cents an hour evoke so much more feeling than the image of another Indonesian earning the equivalent of 30 cents an hour trying to feed his family on a tiny plot of land?” Their point is that sweatshops are the better of two evils; the alternative for these workers is to do manual labour in fields or farms in the hot sun – a much more physically taxing and lower paid job.

Fair-wage clothing should be supported, but, as Nicholas Kristof argues, boycotting sweatshops ends up taking jobs away. It’s simple: if labour were to become more expensive, then many people would have to be laid off in order to maintain profit margins. Despite the tragic cases of suicide, it seems that workers are voluntarily opting to work in sweatshops; as a Cambodian woman put it, “I’d love to get a job in a factory,” said Pim Srey Rath, a 19-year-old woman scavenging for plastic. “At least that work is in the shade. Here is where it’s hot.” The closing of sweatshops has also been linked to an increase in child prostitution, as this is the only way these children have found a way to subsist.

Despite this, just because sweatshops are better than the alternative, this does not mean that they should be praised in the way that many economists have praised them. Sure, sweatshops have allowed developing countries to become more prosperous; as Johan Norberg puts it, “[Sweatshop critics] say that we shouldn’t buy from countries like Vietnam because of its labor standards, they’ve got it all wrong. They’re saying: “Look, you are too poor to trade with us. And that means that we won’t trade with you. We won’t buy your goods until you’re as rich as we are.” That’s totally backwards. These countries won’t get rich without being able to export goods.”

But the grim reality surrounding sweatshops still demands a response. How can we simultaneously allow these countries to compete in the global economy and promote social justice at the same time? It appears that the only way that these countries can ‘afford’ to preserve human rights will be to keep violating them; for the time being anyway. Adam Smith’s argument that trade increases the productivity and prosperity of all involved seems to apply here. If factory owners were to adhere to certain safety standards, minimum wage laws etc., then workers would become unemployed as a way to save costs. As these countries become more prosperous through sweatshops then more money can go towards better working conditions in sweatshops, not to mention opportunities elsewhere in the job market and in the education sector.

Countries such as China, Vietnam, Cambodia, Bangladesh, Pakistan and the Philippines may follow in the footsteps of America’s history of industrialisation. When the US became industrialised, child labour, low wages and poor working conditions were prevalent. However, as industrialisation increased, so did the number of new jobs. This growing labour movement led to workers demanding better wages and working conditions, eventually achieving basic rights, such as the right to form unions, negotiate wages, overtime pay, health insurance and pensions. All of this was only possible through the wealth that sweatshops generated. So when workers in developing countries have the power to demand these basic rights, they will probably have to fight for them.

Another obstacle facing sweatshop workers gaining legal rights is the corruption and lack of democracy that exists in their country. These forces will also have to be tackled before sweatshop workers get the protection that they deserve. We should still continue to raise awareness about the terrible working conditions of sweatshops and to do whatever we can to create links between trade unions in different countries so that everyone has a right to expect reasonable working conditions.