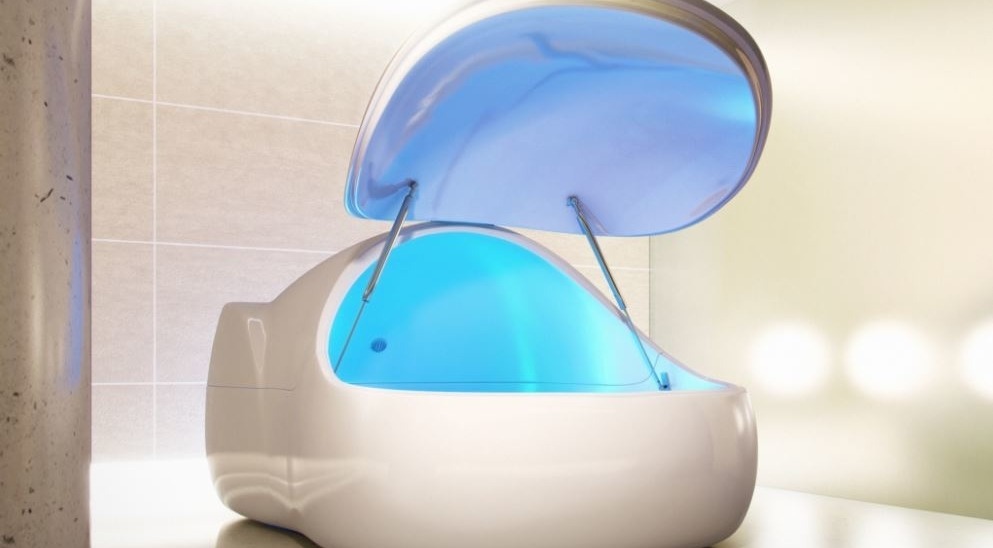 The sensory deprivation tank (also known as an isolation tank or a floatation tank) was invented in 1954 by John C. Lilly. Lilly (1915-2001), as well as being interested in the effects of sensory deprivation on consciousness, was also interested in dolphin communication and psychedelic drugs. When studying neurophysiology at the National Institute of Mental Health in 1954, he wanted to see if he could isolate the brain from external, sensory input – from this, he would design the world’s first isolation tank. This tank was pitch black, completely soundproof, and was full of warm salt water so that the user could float in a way similar to floating in the Dead Sea.

The pitch blackness of the tank gives the odd sensation that with eyes closed and eyes open, everything looks completely the same. The temperature regulation of the water is important since the idea is to have the water at the same temperature as your skin (around 34 degrees Celsius). The aim of this is to cut off the sensory input (such as heat, coldness and tactile sensations) that your body sends to your brain.

Floatation tanks today contain around 800 pounds of Epsom salt – this is not common salt (sodium chloride), but magnesium sulfate (an inorganic salt which contains magnesium and sulphur). This amount of Epsom salt makes the water so dense that the water can be very shallow and you are still able to perfectly float in it. The tanks are soundproofed so well that you are able to hear the sound of your own heartbeat, your muscles tensing and your eyelids closing. Not only is the water regulated to be the same temperature as your skin, but so is the air inside the tank. It can, therefore, be difficult to tell where your body ends and where the water and air begins. This in itself can create some interesting subjective experiences, such as the feeling of floating in zero-gravity or floating in outer space.

Although flotation tanks are usually marketed today in terms of their potential for “relaxation” and “stress reduction” – a sort of spa treatment – John Lily found that some much deeper mental states could be reached by using these tanks. In his book, The Centre of the Cyclone, he details his journey in trying to explore “inner space” as much as possible. One way he did this was going into an isolation tank for long periods of time…also while on LSD. But it gets stranger than that. This is Lilly describing his first floatation/LSD experience:

I finally took it in the isolation tank in St. Thomas in the Virgin Islands with three dolphins there. I took LSD for the first time, in the tank, with three dolphins under it in a sea pool. I was scared shitless. It was 300 micrograms injected intramuscularly.

He goes on to say:

That first trip was a propulsion into domains and realities that I couldn’t even recount when I came back. But I knew that I had expanded way beyond anything I had ever experienced before, and as I was squeezed back into the human frame, I cried.

Lilly recounts that some of his more intense experiences in the tank had led him to make contact with extra-dimensional beings, and visit hyper-advanced civilisations. However, these downright crazy experiences are not commonly reported among those who use isolation tanks, even among veteran users. Commonly reported experiences do include a heightened level of introspection and a feeling of the mind leaving the body. Recordings of Joe Rogan on YouTube praising the tanks for their ability to create altered states of consciousness have recently increased their appeal.

Even the renowned physicist Richard Feynman describes in the book, Surely You’re Joking, Mr Feynman, how he visited John Lilly to try out his tank, and he himself reported having out-of-body experiences. Many have likened the sense of introspection and loss of bodily awareness to experiences of deep meditation. Both isolation tanks and meditative states have been linked to a decrease in alpha wave activity in the brain, with an increase in theta wave activity (which interestingly is also associated with sleeping).

Some clinical data, as well as anecdotal evidence, back up the ability of these tanks to cause hallucinations. In a 2009 paper entitled The Psychotomimetic Effects of Short-term Sensory Deprivation, the scientists O.J. Mason & F. Brady found that just 15 minutes of near-total sensory deprivation could produce intense hallucinations in many test subjects. That said, there has been very little research done in the area of sensory deprivation, so it is not clear exactly how an isolation tank affects the brain and consciousness.

John Lilly has also described his experiences with isolation tanks in books such as The Deep Self and Tanks for the Memories. Based on his experiences with floatation tanks and psychedelics, he realised that “In the province of the mind, there are no limits” (from The Human Biocomputer, 1974). The film Altered States (1980) is based on John Lilly’s research into the effects of going into an isolation tank under the influence of drugs such as LSD and ketamine. In his book, Tanks for the Memories, he says that “After 10 years in the tank I formulated a working rule: whatever one believes to be true is true or becomes true in one’s own mind.” (Lilly himself ended up believing that his life was being watched over and controlled by extra-dimensional entities, so perhaps he took this “working rule” a bit too far).

With the rise in popularity of floatation tanks, they are now being used for many purposes. Some use it as an aid to meditation or self-hypnosis. Some use it for its relaxing, stress-reducing effects (it has been shown that floatation therapy can reduce levels of cortisol, a hormone associated with stress). And some use it for purposes of self-improvement and self-exploration. There is even some evidence of the physical benefits of using these tanks as well. It has been discovered that because the Epsom salt contains magnesium, this magnesium can actually be absorbed through the skin and correct any magnesium deficiencies the person might have.

I’ve used a floatation tank once so far, for an hour-long session. Although it was my first time, and it was only an hour long, I can see the potential benefits. During the first 40 minutes, I tried to get used to the feeling of being in the tank. But in the last 20 minutes or so I felt that I became way more introspective – it was almost like receiving a life lesson from myself or having a life review. And it feels like I learnt some very important lessons. I look forward to experimenting with these tanks again.

Update: I have since had a few more experiences with the floatation tank. My second one was two hours long, but since I was hungover and needed the toilet the whole time, it was difficult for me to fully immerse myself in the experience. That said, my mind was still definitely altered – some emotionally charged memories were explored in a different light, for example.

My third experience was an hour long, but I meditated before this session and fell into the altered state of mind much more quickly than the two times before. It involved a deep analysis of myself and thoughts about how I need to improve my life. I also explored humanity as it exists on different levels: behavioural, societal, psychological, spiritual, experiential, and looked at these aspects from some interesting angles I hadn’t considered before.

My fourth experience wasn’t so great. I felt tired and rundown anyway, but during the hour-long session I was sort of dozing off and in that half-asleep state, my mind became flooded with random meaningless thoughts, noises and images. After the hour was over, I didn’t even get the usual feeling of deep relaxation. Oh well, better luck next time I suppose.

My fifth experience was as good as always – I had the life review I usually get, with the important parts of my life being emphasised. My imagination and creative thinking were enhanced so that I could explore topics in both a visually and intellectually different way.

I will definitely continue to use the tanks whenever it is financially viable – the only downside to them is that they are pretty expensive.

If you live in London, you can book a floatation tank session here.

For a really good interview with John Lilly, check this one out.

To hear Joe Rogan on sensory deprivation tanks, check out this YouTube video.

For the Vice documentary with Hamilton Morris on these tanks, check it out here.