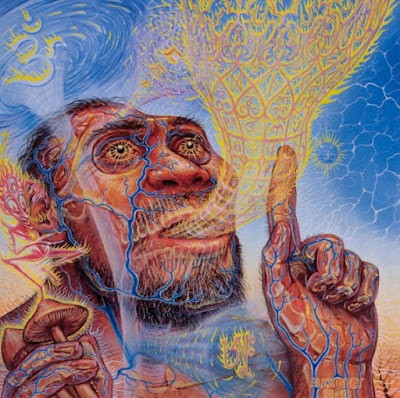 In his book Food of the Gods (1992), Terence McKenna describes one of his many controversial ideas. This idea, known as the ‘Stoned Ape Theory’, relates to how our ancestors evolved to produce language and create art. In a nutshell, the Stoned Ape Theory says that magic mushrooms sped up the evolutionary process and that, ultimately, the psychedelic experience is responsible for the origin of the human mind, language and culture. (It is more accurate to call the Stoned Ape Theory a hypothesis – it is not technically a scientific theory since it is speculative and not substantiated by evidence.)

Between the emergence of Homo erectus 1.8 million years ago and early Homo sapiens, the human brain doubled in size. The cause of this rapid expansion in brain size is still hotly debated within the scientific community. Humans may have required a larger brain in order to handle the complex motor skills that are necessary for making and using tools. We may have needed a larger brain for the purposes of living in a complex society, for gaining a greater capacity in memory, for developing language – or a combination of all these factors working together. One hypothesis that is not seriously considered in the scientific community, however, is McKenna’s.

It has long been said that psychedelics ‘expand your consciousness’ – and brain scans of people under the influence of psychedelics reveal “the physiological and biological underpinnings” of this phenomenon, according to researcher Robin Carhart-Harris. These substances seem to create a ‘heightened state of consciousness’ by increasing levels of random brain activity. McKenna gave new meaning to this phrase, by proposing that psychedelics were responsible for our ancestors’ curious doubling in brain size.

Is McKenna’s theory ignored for a good reason, namely because it is unscientific and lacks evidence to support it? To answer this question, it will be useful to look at the assumptions that McKenna makes. In support of his theory, McKenna refers to a study conducted by researchers R. Fischer and R.M. Hill, and claims the authors found that psilocybin in low doses increases something called visual acuity. Visual acuity is how clearly you can see things. McKenna asserts that if our ancestors ate a low dose of magic mushrooms, then they would have an increase in visual acuity or edge detection ability, and therefore be more successful at hunting.

The problem with this line of argument is that it relies on a series of assumptions which, while possible, are not backed up by any convincing evidence. Perhaps magic mushrooms in low doses could increase visual acuity, but McKenna goes on to assume that magic mushrooms grew where our ancestors lived, that our ancestors ate these mushrooms, that they hunted under their effect, that they hunted more successfully, and so on. The argument basically consists of: “If this is possible, then so is this, and this, and this, etc.” McKenna’s hypothesis is undoubtedly imaginative, creative and compelling, but each of his assumptions begs the question: where is the evidence?

It also appears that McKenna misrepresented the findings of Fischer and Hill. In their study, what they actually discovered was that psilocybin changes perception, not visual acuity or edge detection – the drug changes how things look, not how clearly they are defined. In fact, in a paper by these two scientists, they remark that the change in perception caused by a low dose of psilocybin “may not be conducive to the survival of the organism.” This conclusion is completely at odds with McKenna’s interpretation of their findings. It seems he may have skewed their conclusion in order to support his own ideas about human evolution. Furthermore, Fischer and Hill didn’t even study psilocybin at low doses, but at medium doses.

McKenna – and others who support his Stoned Ape Theory – might be inclined to believe his argument relating to visual acuity because, under the influence of psilocybin, it may feel like you can see objects more clearly. But there is no evidence to suggest that this actually takes place while under its influence. Some experiment – such as asking a tripping and non-tripping person to do some task or take some visual test – would be required to substantiate this argument.

Another strange thing that McKenna argues is that in higher doses magic mushrooms increase sexual arousal. From this, he claims that if our ancestors consumed high doses of the hallucinogen they would be more likely to reproduce, and therefore pass on their genes. For McKenna, this shows that the consumption of magic mushrooms would be adaptive and advantageous. Again, however, McKenna cites no evidence to support his claim. There is nothing in the scientific literature which points to the ‘fact’ that magic mushrooms increase sexual arousal.

McKenna also argues that an even higher dose of magic mushrooms would lead to ecstatic, visionary experiences and that these experiences would serve as the foundation of religion. This is an interesting idea, no doubt, but it has not been verified. The first signs of ‘religion’, if it can even be called that, would be found in the cave art of Europe, dating back to 40,000 years ago. This is far more recent compared to when our brain size doubled. There is simply no evidence of religion existing at this time, so it is pure speculation to say that our ancestors were tripping during this period and that this led to the birth of religion.

On the other hand, if the hominids that McKenna refers to are the Homo erectus species (which would fit his timeline), then an increase in sexual arousal may lead to more sexual activity since the hunter-gatherer society of Homo erectus could have been quite egalitarian or even orgiastic. Evolutionary scientist Richard Leakey has said that Homo erectus was probably socially very similar to us modern Homo sapiens. However, sexual dimorphism (differences between male and female) is greater for Homo erectus than for Homo sapiens. The male was 25% larger than the female, which is suggestive of male competition for sexual mates.

My own view is that McKenna’s Stoned Ape Theory is an entertaining and convincing narrative, but, in the end, it is not supported by any reliable evidence. This is not to rule out the possibility that McKenna’s hypothesis could one day be vindicated – after all, his theory is still within the realm of possibility and is even plausible. The renowned mycologist Paul Stamets recognises that while the Stoned Ape Theory is not supported by proven facts, he argues [13:48] on the Joe Rogan Experience podcast that it is still a persuasive explanation of human evolution.

Some say that eating magic mushrooms could have been part of an epigenetic process. An epigenetic process is when an environmental stimulus (e.g. eating a certain quantity of magic mushrooms) changes how genes are expressed, as opposed to changes being made in the gene sequence itself. This change in gene expression could have been advantageous for our ancestors. Nevertheless, even if ingesting magic mushrooms did change the function of the brain or behaviour in some advantageous way, this would not produce inheritable changes through generations. Moreover, it is still difficult to show how tripping on mushrooms would have had an adaptive value.

Other proponents of the theory claim that eating magic mushrooms could be a culturally inherited behaviour. The adaptive behaviour would, therefore, be non-heritable, meaning that it is not passed on genetically, but passed on as a taught behaviour. But once again, there is no clear evidence that this behaviour has an adaptive value.

To try and add some more plausibility to McKenna’s theory, Dennis McKenna (Terence’s brother) has proposed that psilocybin could have caused synesthesia in our ancestors. Synesthesia refers to a condition in which one sensory modality is translated into another. An example of a synesthetic experience would be “seeing sounds” or “hearing colours”. Dennis argues that meaning, symbol and metaphor (all central to language) depend on this cross-wiring of different sensory systems. Language is inherently synesthetic because it involves attributing meaning to mouth noises. He maintains that the synesthetic experience of a magic mushroom trip could have made the synesthetic experience of language possible and that, once the benefits of language were experienced, language would be naturally selected for from then on.

McKenna was a huge enthusiast of magic mushrooms, which may explain why he was keen to attribute to them an influence in our evolutionary past. Perhaps he was so blown away by the effect that magic mushrooms had on his consciousness that he thought it could have radically changed our ancestors’ consciousness as well. McKenna also remarked in an interview that the Stoned Ape Theory proposed in Food of the Gods was “consciously propaganda”, as a way to persuade people that “drugs are natural, ancient and responsible for human nature” and not “…alien, invasive and distorting to human nature.” In other words, it was in a sense fabricated to promote his own agenda.