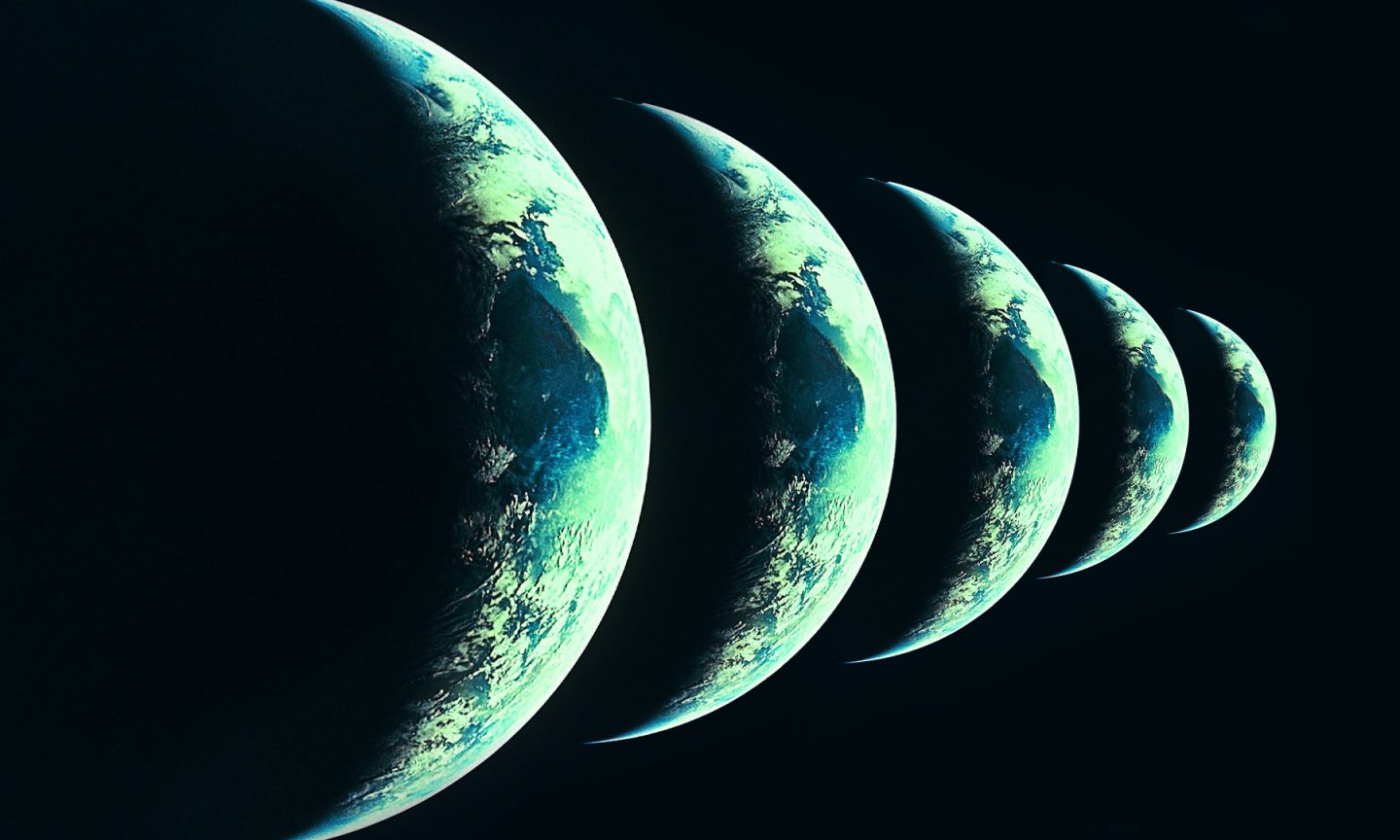 The multiverse idea says that many universes exist, possibly an infinite number of them. The term ‘Universe’ literally means everything that there is, but it can also be more narrowly defined as everything that we can observe. This narrow definition allows for the possibility that other universes exist beyond this one, it’s just that we can’t observe them or at least we haven’t received any evidence that they exist yet. The multiverse idea can be traced all the way back to the Greek philosopher Democritus (460 BC). Over 2000 years ago philosophers such as Democritus, Leucippus, Heraclitus and Lucretius were already arguing that everything was made of “atoms” – little bits of matter. Democritus also talked about there being “more worlds” and that some of them will be very different to the one we know.

The Italian astronomer Giordano Bruno wrote in his book On the Infinite Universe and Worlds (1584) that he thought since God is infinite, he must’ve made an infinite universe, with an infinite number of separate ‘worlds’. Although in contrast to Democritus’ idea that these worlds would be hugely different from ours, Bruno writes: “In it [the Universe] are an infinity of worlds of the same kind as our own”. People have said that Bruno foreshadowed Hugh Everett’s many-worlds interpretation of quantum mechanics. But I’ll get to Everett’s theory later on. Bruno’s claim that many worlds exist would land him in a lot of trouble. The Roman Inquisition confronted him about these views, asking him to deny them. He refused to and was eventually put on trial, imprisoned and finally executed (by being burned at the stake).

The idea that many worlds or many universes exist has been – and still is – a controversial idea. But at least it can be discussed without threats of execution from the Catholic Church. There are many variations on the multiverse idea and each one is as interesting as the next. The idea of ‘parallel universes’ or ‘alternate realities’ is one of them and is commonly imagined in many science fiction and fantasy stories. Jorge Luis Borges looks at this theme in his short story The Garden of Forking Paths (1941) where each ‘path’ in the story is revealed to be a separate future. The idea of alternative realities is a common theme in Philip K. Dick’s works, in books such as Ubik and The Three Stigmata of Palmer Eldritch. These fictional scenarios might, however, correspond to how things really are.

One reason for proposing the multiverse idea is that it could help explain the fine-tuning problem. In our universe, there are certain values, such as the strength of gravity and the mass of the electron, which make life possible. If gravity was just a tiny bit weaker, the universe would’ve expanded much faster after the Big Bang and clusters of gas and particles would not have formed. There would be no planets and, therefore, nowhere for life to evolve. If gravity were just a tiny bit stronger, then expansion would be slower and eventually, all the matter that did expand would soon be compacted together in a kind of Big Crunch. Life also couldn’t evolve in this kind of scenario since it would be crushed by the weight of gravity. The gravitational force, like many other ‘constants’ in nature, appears to be tuned just right to support the formation of galaxies, stars, planets and life. If many universes exist, then it could just be that we got ‘lucky’ with our particular constants – we don’t have to say that our universe was ‘designed’ (by a god, alien civilisation, computer simulation etc.).

The same reasoning applies to the fact that we live in three spatial dimensions, not more or less. The anthropic principle says that we shouldn’t be surprised to find ourselves in a universe suitable for life, since out of all the many universes that exist, at least one (however unlikely that may be) will have laws which support the existence of life. Furthermore, if there is an infinite array of universes, we should be even less surprised.

The physicist Lee Smolin argues in his book The Life of the Cosmos that natural selection, which is responsible for biological evolution, could also be responsible for the universes with a particular set of laws. For example, natural selection could favour universes which are the best at reproducing. If universes are born in black holes, then the best universes for reproducing are ones which produce black holes. Furthermore, the laws of physics which guarantee black holes are the laws which we have in our universe. So we really shouldn’t be surprised to find that we live in a universe where galaxies and life forms exist – they are a natural consequence of the fact that our universe is effective at producing black holes.

Andre Linde has proposed that there could be an ‘eternal’ inflating Universe, where separate Big Bangs are going on all the time, inflating to become separate universes with their own region of space-time. Each universe can be thought of as a soap bubble lying close to another soap bubble, but being completely cut off from it as well.

A common criticism of the multiverse idea is that it is unscientific. If we cannot know about or observe these other universes or alternate realities, then how can we ever find out if they exist? The point of any scientific hypothesis is that it has to be testable. If the hypothesis cannot be tested, then no evidence can be gathered to either support it or disprove it. Paul Davies in his article A Brief History of the Multiverse argues that the multiverse idea is similar to using God to explain the universe: they both assume the existence of something ‘unseen’ to explain what we can see. Both explanations, Davies says, are based on faith.

However, the physicist Laura Mersini-Houghton and her team developed a multiverse theory which makes four predictions. Three of these predictions were confirmed by them, one of them being a “cold spot” in a universe which was taken to be a sign of “the unmistakable imprint of another universe beyond the edge of our own.” These “confirmed predictions” are controversial, but at least they show how the multiverse idea is not beyond the scope of scientific investigation.

Another criticism of the multiverse idea is that it seems to contradict a rule of thumb known as Occam’s Razor. This is a principle that comes from William of Ockham (1287-1347) and it says that you should accept the explanation which is the simplest or makes the fewest assumptions. Some say that the multiverse idea makes too many assumptions since in some cases it assumes that an infinite number of universes exist. Max Tegmark has replied to this by emphasising that the simplest and most elegant theories include parallel universes by default. He says to exclude these parallel universes would only complicate the theory. Thus, the multiverse idea may be the simplest way to explain our universe. This seems strange – even counter-intuitive – but that doesn’t mean it’s not true.