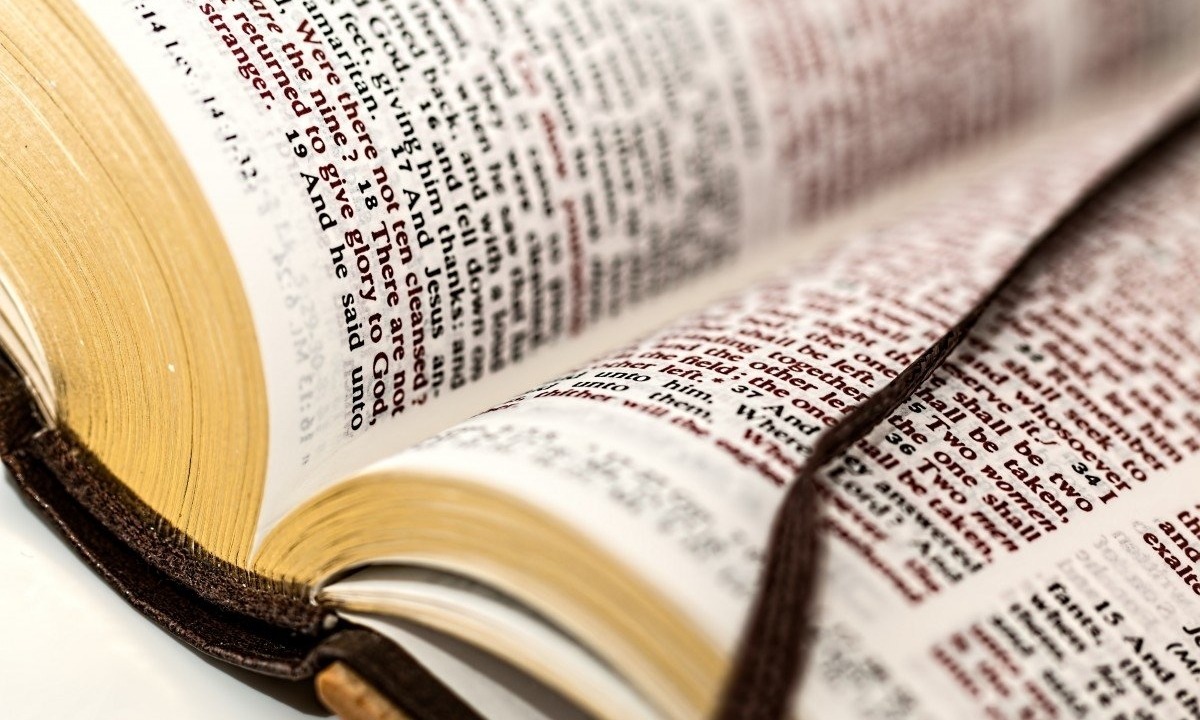 In Ezekiel 1:4, “I looked, and I saw a windstorm coming out of the north–an immense cloud with flashing lightning and surrounded by brilliant light. The center of the fire looked like glowing metal.”

In Ezekiel 1:5 “and in the fire was what looked like four living creatures. In appearance their form was that of a man.” Ezekiel 1:6 goes on to mention, “but each of them had four faces and four wings.” Ezekiel 1:14, “The creatures sped back and forth like flashes of lightning.”

In Ezekiel 1:16, “This was the appearance and structure of the wheels: They sparkled like chrysolite, and all four looked alike. Each appeared to be made like a wheel intersecting a wheel.”

The book of Genesis casually mentions rape and incest as the reason why the Moabites and the Ammonites exist.

Again, in the book of Genesis, we come across the character Lot. In the next quote, Lot is hiding two angels who came to visit the city of Sodom. The men of Sodom come to Lot’s house asking to have sex with the angels (who are men). Lot offers up his virgin daughters instead.

In Genesis 19: 4-8 it says, “Before they had gone to bed, all the men from every part of the city of Sodom–both young and old–surrounded the house. They called to Lot, “Where are the men who came to you tonight? Bring them out to us so that we can have sex with them.” Lot went outside to meet them and shut the door behind him and said, “No, my friends. Don’t do this wicked thing. Look, I have two daughters who have never slept with a man. Let me bring them out to you, and you can do what you like with them. But don’t do anything to these men, for they have come under the protection of my roof.”

In the book of Kings, a man is made of fun by some children for being bald. As a suitable punishment for this, God sends two bears to kill all of the 42 children.

It says in Kings 2:23, “And he went up from thence unto Bethel: and he was going up by the way, there came forth little children out of the city, and mocked him, and said unto him, Go up, thou bald head; go up thou bald head.” This carries on in Kings 2:24 with “And he turned back, and looked on them, and cursed them in the name of the LORD. And there came forth two she bears out of the wood, and tare forty and two children of them.”

Despite Jesus’ teaching of “love thy neighbour as thyself” and the Golden Rule of “do unto others what you would have them do to you”, the New Testament’s description of Hell isn’t very forgiving.

In Matthew 25:30, it says, “And cast ye the unprofitable servant into outer darkness; there shall be weeping and gnashing of teeth.”

Samuel 22:6 describes “The sorrows of hell” and “the snares of death.”

Thessalonians makes it clear that it is part of God’s judgement for sinners to burn in hell: in Thessalonians 1:9 it says “Who shall be punished with everlasting destruction from the presence of the Lord, and from the glory of his power.”

Revelation 21:8 mentions the “unbelieving” (atheists and those with a different faith presumably), “murderers”, “whoremongers”, “sorcerers” (all those wizards and witches), “idolaters” and all “liars”, all of whom will burn “in the lake which burneth with fire and brimstone.”

In the book of Exodus, Moses encounters a burning bush through which God speaks. Psychology professor Benny Shanon from Hebrew University claims that Moses could have been under the influence of a hallucinogenic drug similar to ayahuasca. It is speculated that the ‘bush’ belonged to the Acacia species, a type of tree which contains DMT. Shanon also argues that the presentation of the Ten Commandments could have been a mass hallucination. Others have suggested that the ‘burning bush’ vision, like all of the visions and religious experiences in the Bible, could have been caused by temporal lobe epilepsy, a disorder which often results in visual and auditory hallucinations.

In Exodus chapter 3 it says, “Now Moses was tending the flock of Jethro his father-in-law, the priest of Midian, and he led the flock to the far side of the wilderness and came to Horeb, the mountain of God. There the angel of the Lord appeared to him in flames of fire from within a bush. Moses saw that though the bush was on fire it did not burn up.”

The book of Revelations contains passages about the Apocalypse, Armageddon, the Antichrist, the Four Horsemen, the Beast, corpses rising from their graves and other nightmarish scenarios.

Revelation chapter 13 describes a beast “rise up out of the sea, having seven heads and ten horns, and upon his horns ten crowns. And the beast which I saw was like unto a leopard, and his feet were as the feet of a bear, and his mouth the mouth of a lion.” Then there is another beast who has a “number” and that “number is six hundred threescore and six.” Most people think the number of the beast is 666 (Saint Irenaeus said it was 666 in the 2nd century AD), but based on the oldest papyrus of the books of Revelations (dated to 300 AD) the number of the beast reads as 616.

Revelation chapter 1 describes an angel, “And he had in his right hand seven stars: and out of his mouth went a sharp twoedged sword.”

Revelation chapter 10 describes another angel, “And I saw another mighty angel come down from heaven, clothed with a cloud: and a rainbow was upon his head, and his face was as it were the sun, and his feet as pillars of fire: And he had in his hand a little book open: and he set his right foot upon the sea, and his left foot on the earth, And cried with a loud voice, as when a lion roareth: and when he had cried, seven thunders uttered their voices.”

Revelation chapter 12: 7-12, “And there was a war in heaven: Michael and his angels fought against the dragon.”

Revelation chapter 21: 1-7, “And I saw a new heaven and a new earth: for the first heaven and the first earth were passed away; and there was no more sea.”

The Old Testament is famous for being full of passages showing God to be genocidal, cruel and jealous.

In Ezekiel 9: 5-6 it reads, “The LORD commands: “kill without showing pity or compassion. Slaughter old men, young men and maidens, women and children.”

Hosea 13:16, “The people of Samaria must bear the consequences of their guilt because they rebelled against their God. They will be killed by an invading army, their little ones dashed to death against the ground, their pregnant women ripped open by swords.”

Exodus 13:14, “Do not worship any other god, for the LORD, whose name is Jealous, is a jealous god.”

Nahum 1: 2-8, “The LORD is a jealous God, filled with vengeance and wrath. He takes revenge on all who oppose him and furiously destroys his enemies! The LORD is slow to get angry, but his power is great, and he never lets the guilty go unpunished. He displays his power in the whirlwind and the storm. The billowing clouds are the dust beneath his feet. At his command the oceans and rivers dry up, the lush pastures of Bashan and Carmel fade, and the green forests of Lebanon wilt. In his presence the mountains quake, and the hills melt away; the earth trembles, and its people are destroyed. Who can stand before his fierce anger? Who can survive his burning fury? His rage blazes forth like fire, and the mountains crumble to dust in his presence. The LORD is good.” I love the last line.

Zephaniah 3: 6-10, “I have wiped out many nations, devastating their fortress walls and towers. Their cities are now deserted; their streets are in silent ruin. There are no survivors to even tell what happened. I thought, ‘Surely they will have reverence for me now! Surely they will listen to my warnings, so I won’t need to strike again.’ But no; however much I punish them, they continue their evil practices from dawn till dusk and dusk till dawn.” So now the LORD says: “Be patient; the time is coming soon when I will stand up and accuse these evil nations. For it is my decision to gather together the kingdoms of the earth and pour out my fiercest anger and fury on them. All the earth will be devoured by the fire of my jealousy.”

Zephaniah 1: 2-6 describes God at being really good at destroying things. It reads, “I will sweep away everything in all your land,” says the LORD. “I will sweep away both people and animals alike. Even the birds of the air and the fish in the sea will die. I will reduce the wicked to heaps of rubble, along with the rest of humanity,” says the LORD. “I will crush Judah and Jerusalem with my fist and destroy every last trace of their Baal worship. I will put an end to all the idolatrous priests, so that even the memory of them will disappear. For they go up to their roofs and bow to the sun, moon, and stars. They claim to follow the LORD, but then they worship Molech, too. So now I will destroy them! And I will destroy those who used to worship me but now no longer do.”

Jeremiah 50: 21-22, “Go up, my warriors, against the land of Merathaim and against the people of Pekod. Yes, march against Babylon, the land of rebels, a land that I will judge! Pursue, kill, and completely destroy them, as I have commanded you,” says the LORD.”

Deuteronomy 7: 1-4, “When the LORD your God brings you into the land you are about to enter and occupy, he will clear away many nations ahead of you: the Hittites, Girgashites, Amorites, Canaanites, Perizzites, Hivites, and Jebusites.”