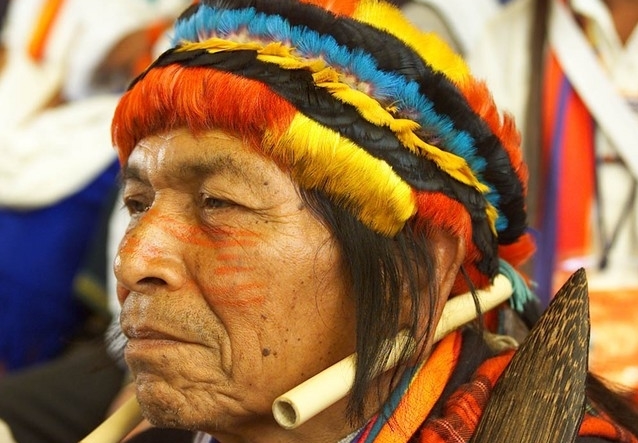 The global incidence of mental illness is staggeringly high. According to the World Health Organization (WHO), one in four people around the world will be affected by a mental disorder at some point in their lives. It is interesting to note, however, which countries have the highest incidences of mental illness. Rates of depression and anxiety are high in the wealthiest countries, with the US being a notable example.

But depression and anxiety are not just illnesses of affluence – these conditions are prevalent in developing countries as well (for example, in India, Indonesia, Pakistan, Bangladesh and Nigeria). This is because there are many factors which can influence poor mental health, including modern culture and poverty.

Yet not all societies are so terribly afflicted with these complex and perturbing conditions. Indeed, in traditional societies, mental illness, self-harm and suicide are very rare – pretty much unheard of, in fact.

Why is this the case?

There’s No Language for Mental Illness

Psychiatrist Neel Burton, author of Growing from Depression, points out that:

In traditional societies human distress is more likely to be seen as an indicator of the need to address important life problems than as a mental disorder requiring treatment. For this reason, the diagnosis of depression is correspondingly less common.

Burton adds that some communities in Korea, India and Nigeria do not even have a word of a concept which can really match what we know depression to be. Any ailment which we may view as depression, based on psychological symptoms, people from traditional societies would describe only in terms of physical symptoms, such as fatigue.

In a previous article, I underscored that whether someone is diagnosed as schizophrenic or singled out as having shamanic abilities largely depends on the cultural context.

Where does the person live? Are their experiences viewed negatively, as symptoms that warrant a clinical diagnosis? Or are they upheld and nurtured as having a unique, positive function in society? These are all pertinent questions.

Similarly, Burton emphasises that what we consider psychosis in our society might be thought as a normal or highly valuable state in a traditional society. There are also cultural reasons why eating disorders rare in traditional societies. Anorexia nervosa and bulimia are clearly influenced by culturally defined standards of beauty.

All of this goes to show the extremely influential effect of culture on mental suffering. With this in mind, should we, therefore, tell people suffering from clinical depression to view their condition as a life problem, rather than an illness? Not necessarily. With that said, the language we use to discuss mental health in developed Western countries is not so clear-cut – some ways of thinking and talking about mental health are more conducive to alleviating suffering, while other ways do the opposite.

Furthermore, the culture of developed Western countries may differ from that of traditional societies in such a deeply unhealthy way so as to justify describing certain mental phenomena as unhealthy. As the Indian philosopher Jiddu Krishnamurti eloquently puts it: “It is no measure of health to be well adjusted to a profoundly sick society”.

Of course, distress exists in traditional societies, but the way that this distress presents itself can vary widely across cultures. Every person suffers because of their own mind; that’s part of the human condition. But certain negative states can become more intense due to the more isolating, stigmatising and anxiety-inducing aspects of modern society. Being part of a close-knit community, knowing your place in it and staying grounded in one location could partly help to explain why mental health issues are rare in traditional societies. Modern living, on the other hand, is for many people fast-paced, highly competitive, constantly changing, alienating and characterised by chronic stress. This isn’t to say we should discard all of the incredible benefits and freedoms of modern society and live a more traditional way of life. But there does seem to be something amiss.

People in traditional societies don’t tend to feel burdened by deep existential crises, yet this is commonplace for sufferers of depression. The fact that some of the most famous modern philosophers in the West have dedicated their life’s work to this problem is also telling. This doesn’t mean existential philosophy is a burden (far from it). It is curious, though, the way in which certain mental phenomena can so heavily depend on culture.