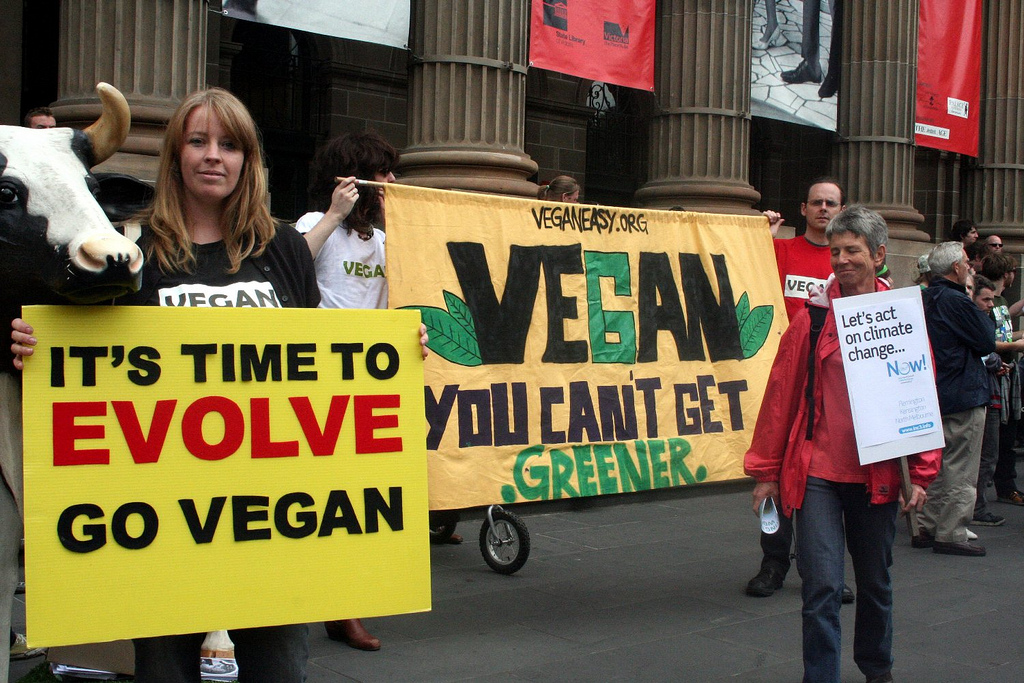 Recently, the dairy industry lost a battle against vegan campaign group Go Vegan World. The Advertising Standards Authority (ASA) rejected claims that an advert claiming ‘Humane milk is a myth’ is misleading and inaccurate. Some of the complainants were from the dairy industry.

The case can be made that there is no such thing as humane milk and that the advert is honest, as the ASA decision illustrates. Whether we’re talking about a factory farm or a small, organic, free-range farm, certain practices can still realistically be called inhumane.

The message of this advert, for example, emphasises the cruelty involved in separating calves from their mothers after birth. This happens on small dairy farms as well. Following the “callous” separation, the mother will grieve and bellow. It’s a distressing situation for both the cow and the calf. Also, since male calves won’t produce milk, they will be sold to be raised as beef, regardless of whether the farm is small and uses organic and free-range practices. And when the cows no longer produce milk, they will be slaughtered.

There is a slaughter-free dairy farm in the UK (called Ahimsa Farm), which also abandons the practice of separating calves from their mothers, and shuns killing male calves or selling them for meat after birth. In addition, their cows are impregnated by bulls, rather than forcibly by artificial insemination. So this kind of farm could be cruelty-free, but perhaps not so environmentally-friendly. Although, some animal rights philosophers, such as Gary Francione, would argue that using cows as a resource is exploitative, regardless of how they’re treated.

An honest and balanced appraisal of the dairy industry shows that no-one is buying humane milk because, besides the anomaly of Ahimsa Farm, it doesn’t exist. From either an ethical and an environmental perspective (or both), giving up dairy can be easily justified. However, the recent release of the documentary What the Health, from the makers of Cowspiracy, may not offer such an honest and balanced campaign for veganism.

What the Health makes the case for veganism from, as you can guess, a health perspective, rather than the environmental perspective offered in Cowspiracy. But this new vegan documentary has been accused of being misleading. Similarly, Cowspiracy pushed veganism by promoting the inaccurate claim that animal agriculture is responsible for 51% of greenhouse gas (GHG) emissions. The widely accepted figure is around 15%. The 51% figure, in contrast, comes from a non-peer-reviewed that is flawed in all kinds of ways.

Julia Belluz, senior health correspondent at Vox, claims that What the Health cherry picks data, exaggerates findings or reports them out of context in order to more strongly make the case for going vegan for health reasons. Vegan dietician Virginia Messina also wrote an article which underscores this problem. For example, the documentary highlights studies showing a link between milk and various cancers. And to their credit, the website dedicated to the documentary does cite peer-reviewed studies to back up this link, as well as the other worrying health implications of dairy consumption.

However, correlation does not equal causation. It could be later established that there is a causal link, but for now, it’s not clear that there is one. Furthermore, Belluz points out that a systematic review of the best available research shows no consistent link between dairy consumption and cancer. And while the documentary stresses how dairy increases the risk of breast cancer, a systematic review finds that women who consume more dairy have a lower risk of breast cancer. Meanwhile, evidence about the benefits of consuming dairy products, such as yoghurt, is ignored.

Of course, it is important to know who is funding these studies, since if the research receives funding from the dairy industry, the methods and results may be distorted. For example, with that study on yoghurt, it notes at the end that funding was received from Danone Institute International, a think tank funded by the multinational Danone which produces dairy and yoghurt products. In any case, this doesn’t mean that there are no trustworthy studies about dairy that describe possible health benefits.  The study finding no consistent link between cancer and dairy, for example, was funded by a grant, rather than a group which has industry interests at heart. Thus, conflict of interest is less likely.

In any case, nutritional science is not as definitive as the documentary makes it out to be. Research can reveal links between certain foods and diseases, but it’s much more difficult to show that one food causes a particular disease. The documentary fails to be honest about this aspect of nutrition, probably because it’s not as attention-grabbing and likely to persuade as many people to veganism as a black-and-white, sensationalist approach.

If veganism is to be taken seriously as a movement, then it’s important that it’s discussed in a careful and measured way. What the Health may lead to many more converts, but other people will be put off if they feel the documentary is misrepresenting the evidence and relying on scaremongering. In addition, as Messina points out, if people see that the health aspect of the movement is fraught with exaggeration and misinformation, then they might become dismissive of arguments about the way animals are mistreated on farms, in zoos and research labs. Animal advocacy is not helped by dishonesty and scientific illiteracy.

It’s important to remain critical and be willing to call bullshit even if it doesn’t shine a positive light on the group or belief system you strongly identify with. In any case, I think that the ethical and environmental arguments in favour of veganism are much more difficult to refute than the health arguments, and are enough to justify the lifestyle.