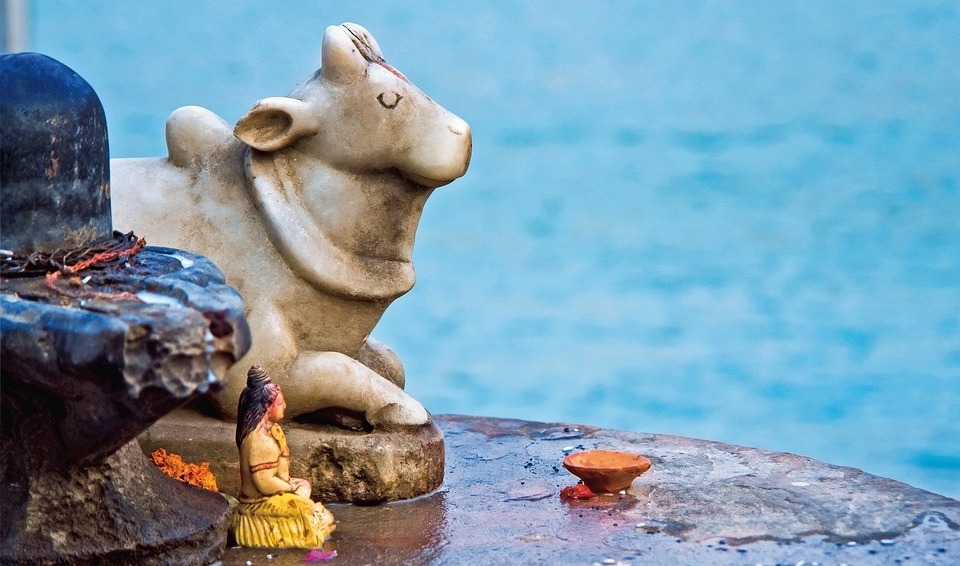 Hinduism is one of the world’s oldest religions. There are many sub-traditions within Hinduism, but there are two beliefs about humans which seem to dominate the religion’s view of animals. The first belief recognises that humans exist on a continuum with the rest of life and that we are not completely separated from other animals. The second belief says that humans are what life should be like, giving us a status superior to that of any other animal.

The concept of karma is central to Hinduism. Karma says that a being will be reborn (or reincarnated) as a particular life form depending on their past deeds. According to Hinduism, if a human lives a life of bad deeds they will be born as an animal. This suggests, by definition, that every animal that exists must have led an immoral life. Therefore, animals are seen as being inferior to humans.

However, the belief that humans are on a continuum with animals can also lead to a more positive outlook. The Hindu tradition also claims that all animals have souls like humans and this relates to the concept of ahimsa (a principle of non-harm or non-violence). It is a principle which says animals have their own life, their own interests and their own ability to feel pain – we should therefore not harm them or kill them. The moral status of animals is also suggested by the fact that the cow is considered a sacred animal. It is also suggested by the fact that the gods Rama and Krishna were reincarnated as a cow and a monkey respectively. You also have gods like Ganesha (the elephant-headed god) and Hanuman (the monkey god) who have long been worshipped in the Hindu tradition.

The Hindu American Foundation (HAF) says that the ethical treatment of animals is fundamental to the core of Hindu belief. In the Hindu epic, Mahabharata, Lord Krishna tells his cousin that, “Humans should take from this planet only that which is necessary for our survival” which many Hindus see as an argument against killing animals for meat. According to Hinduism, there can be serious karmic repercussions for taking an innocent life, causing suffering to another animal or supporting it in some way. Someone can receive negative karma not only for slaughtering a cow, but so can someone who consumes beef since they are funding the slaughter. Vegetarianism is a common practice among Hindus, with Hindus making up the largest percentage of vegetarians in the world. Spiritual leaders such as swamis, sadhus and gurus are almost always strictly vegetarian, and most Hindu temples do not allow meat products on the premises.

Several ancient Hindu texts contain messages about how we should peacefully co-exist with animals, show kindness to them and refrain from injuring or harming them. The Manu Samhita says, “By not killing any living being, one becomes fit for salvation”. In the Bhagavad Purana we find the line; “Deer, camel, donkey, monkey, rats, creeping animals, birds and flies – one should consider them like one’s own children, and not differentiate between one’s children and these creatures”. The Vishnu Dharma Sutra found in the Manu Smitri argues that “He who kills harmless and non-violence creatures for his own pleasure will never get true happiness, whether in this life, or after he dies”. Hindus justify their vegetarianism based on the following teaching, again, from the same text: “Meat can never be obtained without injury to living creatures, an injury to sentient beings (beings which can feel pain) is detrimental to the attainment of heavenly bliss; let him therefore shun the use of meat”.

Buddhism is similar to Hinduism in its view on animals, which is unsurprising since both religions were born out of the same country. Buddhists, like Hindus, believe that both humans and animals are connected to each other by the laws of karma and the process of reincarnation. In Buddhist scriptures and practices, the teaching of compassion often leads to the ethical consideration of animals. In the Mahayana school of Buddhism, animals are regarded as having a Buddha nature, just as humans do, and this gives them the potential to also become enlightened. The Buddha believed in the concept of reincarnation and argued that all beings living in the animal realm have at one point been our mothers, brothers, sisters, fathers, children and friends. Therefore, humans and animals are part of a single family – we are all inter-connected.

The Five Precepts make up the Buddhist code of ethics. The first of the five precepts bans the taking of life and in its broadest sense would ban the killing of both humans and sentient beings. One of the main focuses of Buddhism is on suffering in the world (the First Noble Truth of the Buddha says that “life is suffering”). Since suffering is something which we want to eliminate, and since animals can also suffer, Buddhists believe we should not inflict suffering on them. A concern for animals is found in Buddhist history too. The first Buddhist monarch of India, Asoka, said he intended to put an end to killing certain animals for food – animals and humans should be equally protected.

The First Precept of Buddhism focuses mainly on directly participating in the destruction of life. This is one reason why the Buddha made a distinction between killing animals and eating meat, and refused to introduce vegetarianism into monastic practice. Many Buddhists believe that the Buddha promoted vegetarianism – most Buddhist monks in China, Vietnam and Korea are strictly vegetarian. However, most Buddhists do eat meat in practice.

In terms of the Buddhist scriptures, there is some controversy over what Buddhism actually teaches when it comes to eating meat. In the Pali canon, a collection of Buddhist texts, monks were encouraged to accept whatever food they were given, unless they were given the flesh from an animal which was killed specifically for them to eat. The Buddha himself ate meat on several occasions. But in the Mahayana tradition, the Buddha disagrees with eating meat. In one text he says “…I teach the harm arising from meat-eating”. In this tradition, there is also something called the bodhisattva vow, which says that anyone who wants to become enlightened must show compassion towards all living things.

Jainism is one of the oldest religions, and like Hinduism and Buddhism, it finds its roots in India. Its main teachings is ahimsa or non-violence towards all living beings. Only by following a life of non violence can a Jain get out of the endless cycle of reincarnation. Mahavira is considered the man who gave Jainism its present-day form – he said that “there is no quality of soul more subtle than non-violence and no virtue of spirit greater than reverence for life”. Traditionally ahimsa is interpreted in a negative sense, to not cause harm, but modern Jains also interpret it in a positive sense to do acts which promote justice, peace, liberation and freedom.

Jains believe that all life is sacred, regardless of faith, caste, race, or even species. As it’s written down in Jain scripture, “Do not injure, abuse, oppress, enslave, insult, torment, torture or kill any creature or living being”. In following this teaching, Jain monks may be careful when walking through their temple to ensure they don’t crush any insects. They will also wear cloths over their faces to stop themselves from accidentally swallowing flies and other insects. Violence can be committed in a number of ways and a Jain will avoid committing violence themselves, asking others to commit violence, encouraging others to commit violence, and condoning violence.

The principle of ahimsa affects the life of a Jain in a number of ways. Jains are not allowed to do jobs that cause harm, such as those in which trees are cut; the trading in meat, egg, dairy, silk and leather; selling pesticides; selling weapons; digging; circus work involving animals, and zoo work. Since ahimsa is also a positive concept for Jains, they are encouraged to protect the environment and work for kindness towards animals.

The principle also affects the diet of a typical Jain. All Jains are strictly lacto-vegetarian, which means that they avoid meat and eggs, but can consume dairy products such as milk, cheese and butter. However, many Jains are also vegans, which means that they involve the consumption and use of all animal products. This is based on the fact that dairy products involve violence against cows. Similarly, honey is avoided because it involves violence towards bees. Strict Jains will avoid root vegetables, such as potatoes and onions because tiny creatures are injured when the plant is pulled out the ground. Although Jains say that every life form should be protected, they admit that this ideal cannot be fully realised in practice. So Jains try to avoid causing unnecessary harm as much as possible. In addition, Jains are more careful in protecting beings which are more developed (such as humans) than beings which are less developed (such as animals and plants).