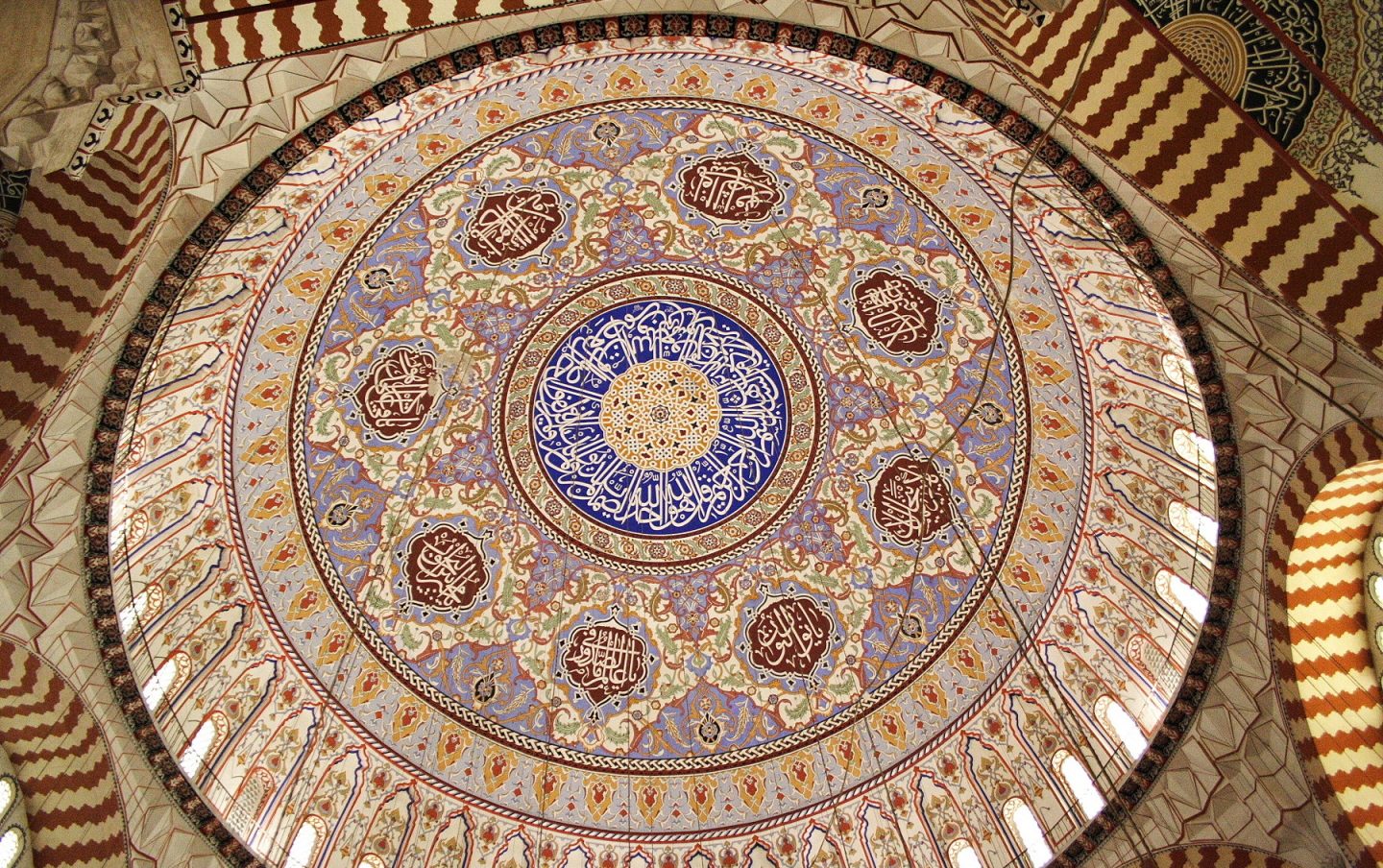 Humans have been attracted to geometric shapes and patterns for thousands of years. Geometry has not only been used for the description of physical reality – from the time of Euclid’s Elements to string theory today – it has also been imbued with a sense of the mystical and the beautiful.

Sacred geometry, for example, is a doctrine dedicated to the idea that certain geometric shapes have a symbolic, sacred or mystical meaning behind them. The ancient Greek philosophers, Pythagoras and Plato, sincerely believed in this idea.

If we look at the Palaeolithic cave art, some of which is over 30,000 years old, we find that geometric signs are very common. These patterns of dots, lines, cross-hatchings, zig-zags and swirls far outnumber the drawings of animal and human imagery. Therefore, our human obsession with geometry goes back to the very origins of art itself. There must be some reason why our Ice Age ancestors in Europe felt compelled to paint these geometric signs on the walls of caves.

There must be some explanation as to why certain geometric shapes take on a mystical status. Why does geometry feature so heavily in all of the world’s cultures? We find geometric patterns in Islamic art, Islamic architecture (such as the Nasir al-Mulk mosque), Zapotec (ancient Mesoamerican) architecture, Buddhist art, Buddhist architecture, Aboriginal art, Acoma (Native American) pottery, and in countless other examples of indigenous art and religious architecture. The tie-dye art of the 60s and fractal art can be seen as the modern counterparts of this deep urge to externalise geometry (no doubt influenced by psychedelic experiences).

In terms of ancient cave art, it has been suggested that the geometric patterns came about from the early practice of shamanism and altered states of consciousness. (For more about this, check out this other article I wrote on the subject). It could be that geometric hallucinations – whether induced by drugs, neurological conditions (i.e. migraine or epilepsy), sensory deprivation, or other shamanistic techniques – could account for our universal fascination with these shapes and patterns. As the famous psychiatrist, Oliver Sacks, has suggested in his book Hallucinations:

Perhaps such experiences are at the root of our human obsession with pattern and the fact that geometrical patterns find their way into our decorative arts.

Firstly, how are these geometric hallucinations produced by the brain? And secondly, why do people who do not have them also appreciate the aesthetic quality of these shapes and patterns? With respect to the first question, here is a possible explanation of how such hallucinations could be generated. Essentially, geometric hallucinations are projections of the geometric structure of our brain. Geometry is built into the architecture of our visual cortex and so if our brain is disturbed in some way, then we can visually experience this fact for ourselves.

That answers the first question. With respect to the second question, as to why ordinary people can recognise the beauty of these patterns as well, it could be that we unconsciously recognise an affinity with them. Even if you haven’t had geometric hallucinations, you may still realise that the symmetry and geometric shapes found in art and architecture is a reflection of the symmetry and geometric shapes which underlie our brain’s structure. As Sacks puts it:

Do the arabesques and hexagons in our own minds, built into our brain organisation, provide us with our first intimations of formal beauty?

We may find geometric art beautiful because in it we see a reflection of ourselves. It is like looking into a kind of mirror, in which we can see a glimpse into the structure of our own brain. These patterns are strangely familiar, but we cannot explain why. It is through the work of certain neuroscientists that we now understand why these patterns are familiar – they are universals of visual cortical architecture and this is why such patterns are cross-cultural.

The reason why we imbue geometric patterns with a mystical status could come down to this strange familiarity or inexplicable connection that we have to them. The mystical status attached to them could also be explained in terms of altered states of consciousness, in which geometric hallucinations are accompanied by intense emotions, ecstasy and the feeling or presence of the ‘divine’. During the experience itself, geometric shapes may take on an ineffable kind of beauty.

Moreover, the geometric structure of our visual cortex could partly explain why we have an aesthetic appreciation of nature. The symmetry, geometry, patterns and fractal structure which is exhibited in our brain organisation is exhibited in plants and flowers as well. The very organ which we use to appreciate the forms of nature is itself built out of those forms. A coincidence? Who knows. But we do seem to have a deep relationship with nature in this way.

Perhaps in nature, we unconsciously see something very fundamental about ourselves. This may partially explain why we find plants, trees, flowers, rivers, mountains and clouds so beautiful because their fractal nature is embedded within our brains as well. It’s no wonder, then, that landscape art has been so popular throughout history. Furthermore, perhaps fractal art and ‘fractal zooming’ is mind-boggling, not just because it offers us a visual representation of infinity, but because it also allows us to see the complex, intricate, self-similar and many-branching structure of our brain.