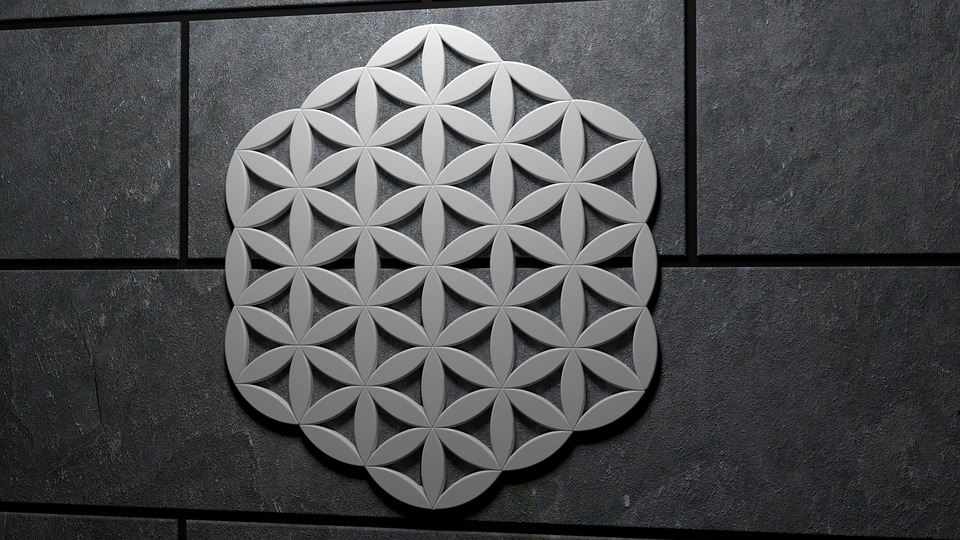 Sacred geometry is the idea that certain geometric shapes have a symbolic, sacred or spiritual meaning behind them. These sacred shapes have been used throughout history in the construction of religious buildings, temples, and architecture. Going back to ancient times, certain numbers (and the polygons which corresponded to these numbers – e.g. the number three corresponding to the triangle) were also thought to have a symbolic, almost mystical significance.

The belief that God created the universe according to a geometric plan is ancient. It goes as far back as Plato and it was also a belief adopted by the great astronomer Johannes Kepler. Kepler wrote an astronomy book called Mysterium Cosmographicum (1596) in which he argued that the five Platonic solids (these being the Tetrahedron, Cube, Octahedron, Dodecahedron, and Icosahedron) dictate the structure of the universe and reflect God’s plan through geometry. Kepler’s model of the universe consisted of these five Platonic solids nested into each other, with all of them surrounded by a sphere. The five solids represented five of the six known planets at the time, with the outer sphere representing the sixth known planet, Saturn. Kepler proposed that the distance between the known planets could be understood in terms of this model. However, we now know, due to accurate observations, that Kepler’s model is false. 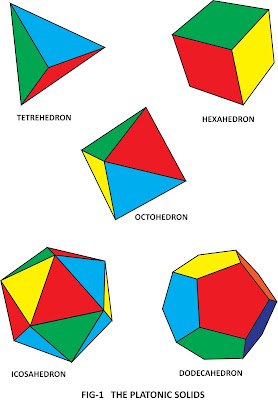 Even some modern mathematicians take a liking to the idea of sacred geometry – Carl Friedrich Gauss, for example, has said that “God arithmetizes”. The British author Stephen Skinner writes in his book, Sacred Geometry: Deciphering the Code, that sacred geometry has its origins in the study of nature. Nature abounds with examples that correspond to geometric shapes (e.g. the nautilus shell to the logarithmic spiral and the cells of a honeycomb to hexagons). Many saw these geometric shapes in nature as evidence that these shapes were sacred since nature itself was seen as something sacred and worthy of being worshipped. Skinner asserts that it is possible to place a geometric diagram over pretty much any natural or human-created object and find some lines which intersect the image. 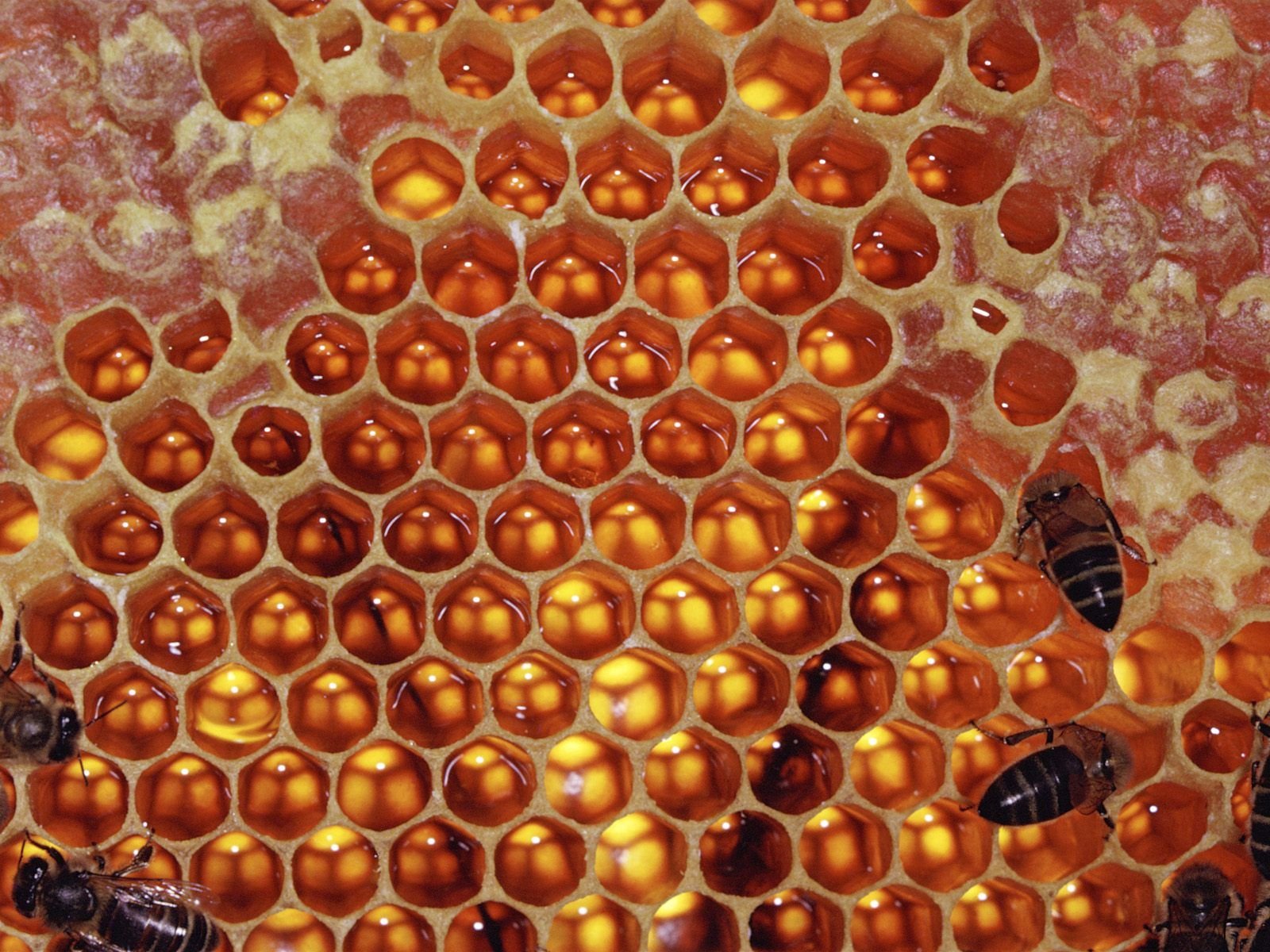 Geometric ratios and geometric shapes were often used in the design of Egyptian, Indian, Greek and Roman architecture. For example, the golden ratio – also known as the “divine proportion” – was used in the construction of the Greek Parthenon. Buddhist communities incorporate the mandala and yantra shapes in the construction of their temples. The mandala is a religious symbol which represents the universe and is often used as an aid to meditation and as entry into a trance state. A yantra is a shape used in Eastern mysticism in order to focus the mind of a spiritual concept. With respect to the yantra, the circle, square and the upward-facing triangle represent three of the elements of nature: water, earth and fire.

The plan of the Borobudur, the largest Buddhist temple in the world (located in Java, Indonesia), is essentially a mandala. The floorplan of the Borobudur is made up of four mandalas (decreasing in size at each higher level) and three circles (also decreasing in size at each higher level). Another example of a mandala shaped building is the largest religious monument in the world – the Buddhist temple of Angkor Wat, located in Cambodia. 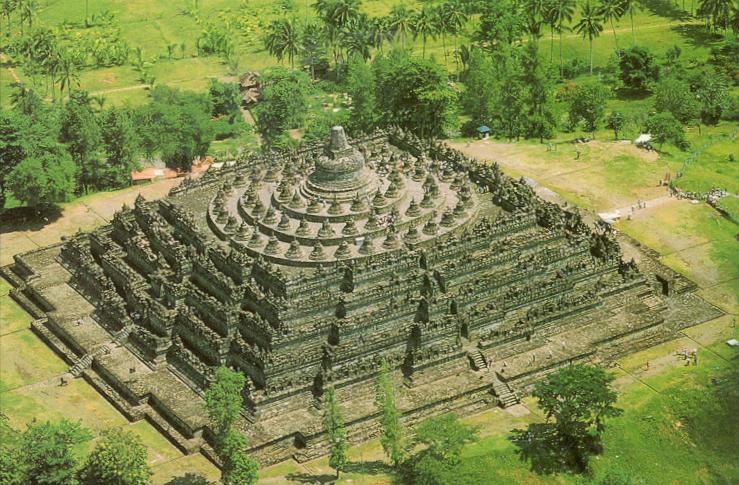 The tetractys, an equilateral triangle consisting of ten points, was a mystical symbol worshipped by the Pythagoreans. The Pythagoreans were a secret brotherhood founded by the famous mathematician and philosopher, Pythagoras. The Pythagoreans would make a prayer to this shape, saying: “O holy, holy Tetractys, thou containest the root and source of the eternally flowing creation!” In the same prayer, the shape is described as “…the mother of all, the all-encompassing, all-bounding, the first-born, the never swerving, the never-tiring holy ten, they keyholder of all”. The Pythagoreans treated this shape as if it were a god. The shape has also been given a mystical significance in Kabbalistic symbols and in Tarot card reading arrangements. The sacred tetractys has been found in the design of many religious buildings. The equilateral triangle in general, which is considered sacred, is found in the tiling design of many religious buildings as well.

Issam El-Said in Geometric Concepts in Islamic Art, says that the hexagon, another sacred shape, is commonly found in the tiling patterns of Islamic buildings. The hexagon is a shape commonly found in nature, so the architects of the Islamic buildings were perhaps trying to replicate this mystical and beautiful aspect of nature. The hexagram or six-pointed star is found in many examples of religious architecture. It is, of course, the symbol of Judaism, known as the Star of David, but it has also been employed in the design of church windows, as well as in Masonic temples. 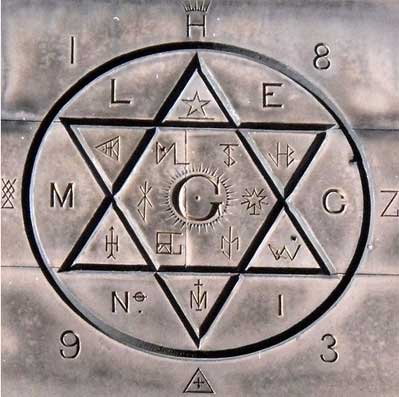 Western classical architecture, with examples found in Greece and Rome, as well as Eastern architecture, considered the circle, square and the triangle to be perfect shapes. Their perfectness rendered these shapes sacred. Both Western and Eastern architects employed these shapes in the construction of their holiest and grandest constructions. However, the Western emphasis on the periphery of these shapes, opposed to the Eastern emphasis on the centre of these shapes, explains why Western and Eastern architecture is so radically different. In Greece and Rome, the square and circle were used as a measure of the “perfect” physical body. This idea was then adopted during the Renaissance by Leonardo da Vinci in his famous drawing of the Vitruvian Man.

The structure of Western and Eastern architecture is a reflection of religious practices. In churches, worship takes place with a priest conducting a service to a congregation. Designing the church in terms of rectangles was the best way to ensure that the priest could project his voice to the congregation in front of him. In contrast, Hindus and Buddhists do not worship in congregations facing a leader. Their worship is processional, consisting of leaving the home, going to the temple, and ending up at the centre of the temple. This type of worship is supposed to signify the path of the individual’s soul to salvation. This is why the corridors of Hindu and Buddhist temples are concentric in nature, in order to further reflect this spiritual path towards transcendence (represented by the centre point of the temple).