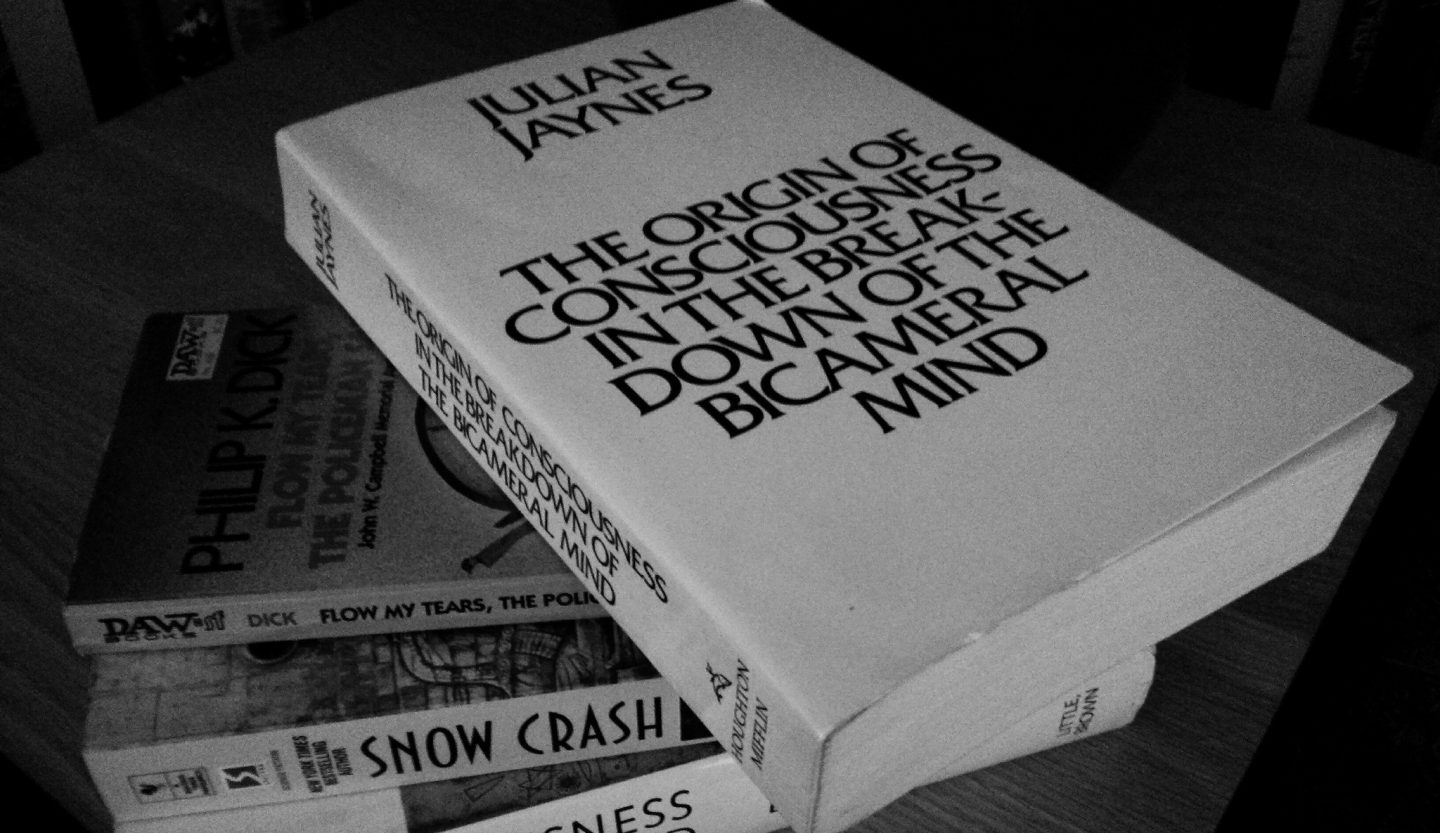 Julian Jaynes (1920 – 1997) was an American psychologist and is best known for his 1976 book, The Origin of Consciousness in the Breakdown of the Bicameral Mind. ‘Bicameral’ means having two chambers. The theory of the bicameral mind says that the two hemispheres of our ancestors’ brains – the left and right – carried out completely different functions. For ancient bicameral humans, the left hemisphere received and obeyed commands from the right hemisphere.

Jaynes argued that as a result of this bicameralism (which is an ancient form of consciousness), our ancestors had no sense of self and had no meta-consciousness (this is when you are conscious of being conscious or being aware of having beliefs, desires, hopes, and so on). Meta-consciousness is seen as distinctly modern and human.

Jaynes claimed that the commands given by the left hemisphere were perceived by the right hemisphere as verbal auditory hallucinations, usually perceived as the voice of an external god. Since the ancient mind was bicameral, with a lack of shared functions between the hemispheres, the ‘voice’ was perceived as coming from outside of the mind, hence why the voice was attributed to an authority figure, chief, god, goddess, angel, spirit or some other ‘higher being’.

But since the commands were, in fact, coming from the inside, our ancestors had no choice but to obey the commands. The commands might have been “fight”, “hunt”, “run”, “hide”, and so on. In bicameral humans, the right side of the brain was associated with organising experience and language, whereas the left side was associated with bodily functions (sex, sleep, hunger, and so on). Since the hemispheres were more or less working independently of each other, the right side spoke to – or issued orders to – the left side.

Jaynes argued that this relationship between the left and right sides of the brain allowed our hunter-gatherer ancestors to evolve into simple societies, all the way up the scale of complexity to ancient Mesopotamian (where agriculture was born), Asian and American civilisations. It is a very interesting theory, but what is the evidence for it, if any?

In his 1976 book, Jaynes asks, “Who then were these gods who pushed men about like robots…?” To which he answers, “…They were voices whose speech and directions could be as distinctly heard by the Illiadic heroes as voices are heard by certain epileptic and schizophrenic patients…” So the evidence for this theory of the mind comes from the oldest examples of literature available, as well as examples of mental disorders in which auditory hallucinations are involved.

According to Jaynes, schizophrenia gives us insight into the bicameral mind. In a way, schizophrenia is an echo of or a reversion to a more ancient kind of mind, in which the schizophrenic hallucinates a voice giving them advice, suggestions and commands, which they then obey without question. This sort of mind may have been useful in our hunter-gatherer days but given the more recent emergence of meta-consciousness and more complex societies, this bicameral mind is now not only useless but can even be debilitating. This would help to explain why schizophrenia is a mental disorder and why schizophrenics face an immense struggle when trying to function in society – they’re essentially navigating an ancient mind through a modern environment. Furthermore, schizophrenics, like our ancestors, are unaware of their own thought processes, so are unable to take a distant perspective and resist the command being given to them.

Jaynes claims that the bicameral mind existed as recently as 3,000 years ago. As evidence for this, Jaynes draws on sources such as Homer’s Illiad and other examples of ancient Greek mythology, music and poetry. In these examples of literature, individuals are guided by mental commands which are believed to be issued by real, external ‘gods’. He is also argued that early sections of the Old Testament (such as the Book of Ecclesiastes) make no reference to introspection, leaving no indication that the authors were self-aware.  This is in contrast to later examples of Greek literature, such as Homer’s The Odyssey, as well as later portions of the Old Testament, such as the Book of Amos. In these later examples of recorded human thought, there are indications of an early form of human self-awareness.

In ancient times, gods were far more numerous and anthropocentric (human-like) because each bicameral person had their own personal god. This god reflected the individual’s own desires and experiences. In ancient times, the dead were also seen as still alive (dead bodies were often dressed, seated and fed) and were often thought to be sources of auditory hallucinations. This evolved into ancestor worship, which, many argue, is the basis of all religion. In fact, Jaynes argued that religion itself is further evidence for his theory – he maintains that religion, like schizophrenia, is a vestige of an earlier human state.

Hypnotism is another vestige of the bicameral mind. Subjects under a hypnotic trance are far more susceptible to suggestion and commands, where they are no longer operating under their own free will. Hypnotism has been a mystery since it was discovered in 1842 by James Braid, but it makes sense if hypnotism is seen as tapping into the vestigial bicameral mind which is no longer used.

In his book, Jaynes also describes the breakdown of the bicameral mind. Jaynes argues that in the second millennium BC, our ancestors faced many environmental pressures which led our mind to become unicameral (one chambered). These pressures could have included natural disasters, collapsing civilisations, mixing of cultures, population growth, forced migration, warfare, trade, and the evolution of writing. In order to cope with a rapidly changing and chaotic world, the mind had to become unicameral; bicameralism was no longer appropriate.

Evidence for the breakdown of the bicameral mind comes from sources of literature. Jaynes describes the Old Testament as “the story of the loss of the bicameral mind, the slow retreat into silence of the remaining elohim [i.e. god voices]…” Indeed, a passage from the Book of Psalms reads, “So pants my mind after you, O gods! My mind thirsts for gods! For living gods! When shall I come face to face with gods?”

Even the myth of the Fall from Eden can be interpreted as the breakdown of the bicameral mind. As further evidence for the disappearance of the gods, Jaynes refers to cuneiform tablets from Sumerian times – one of them reads: “My god has forsaken me and disappeared, My goddess has failed me and keeps at a distance, The good angel who walked beside me has departed”. This is when the self-aware “I” was beginning to emerge.

Rituals such as divination, prayers, visiting oracles, meditation, consumption of psychedelic plants and chanting can be seen as attempts to summon instructions from the ‘gods’ whose voices could no longer be heard. As language evolved into the written form, it exerted a social control that made the hallucinated voices of the gods less necessary. Self-awareness became a more effective way to deal with an increasingly confusing world.

On the other hand, as persuasive as Jaynes’ interpretation of the evidence is, we must also consider the counter-arguments to his theory. The author Frank Robinson wrote an article for the magazine Philosophy Now entitled, How Old is the Self? In it, he examines the many issues he encountered with the bicameral view of our ancient past. He argues that the evidence Jayne uses to support his hypothesis does not actually point to automatons controlled by the voices of gods. His book is full of flaws, according to Robinson.