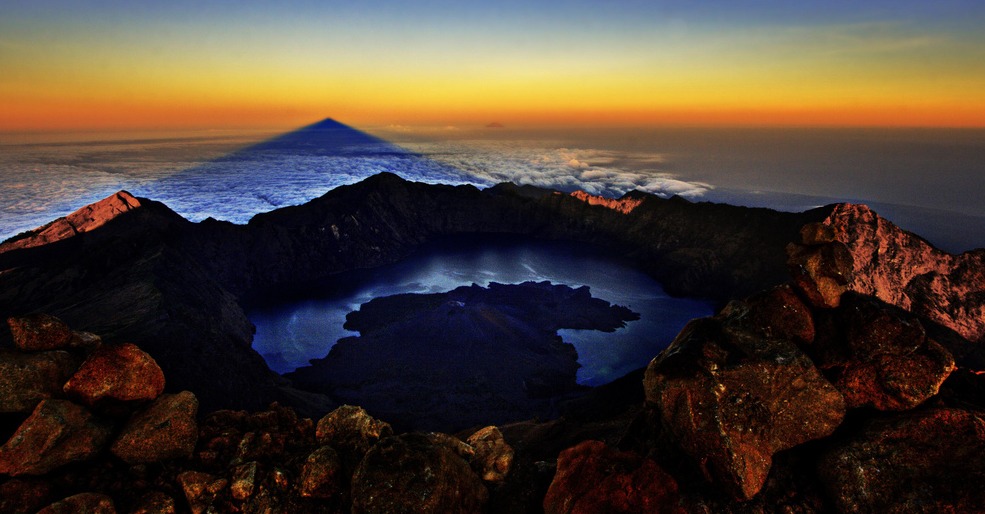 I knew, however, that the 3-day hike up and back down Mount Rinjani was not for the faint-hearted. I had read of how difficult the stretch to the summit was. And these accounts proved to be true. Hiking Mount Rinjani in 2015 was (and still is) the most physically arduous thing I’ve ever done. Moreover, confronting this challenge taught me a valuable lesson about willpower and motivation.

The trek began in Sembalun, which means you start walking through savannah, through tall grass, eventually leading to more hilly terrain. It looked similar to the African savannah, except instead of being flat, the terrain sloped towards a giant volcano.

On the first day, we would reach the crater rim, after about five hours of trekking. After the first couple of hours, we had lunch and then continued, with the terrain having become very steep so that we were now at cloud level. I felt like I was on a roll and for some reason wanted to get to the crater rim as quickly as possible. I left the guide and group behind and kept on climbing. The last hill to the crater rim was killer and felt like a real workout on the legs.

When I got to the top I was the first trekker there. Everyone else was either a guide or a porter. The porters, by the way, really are superhuman – they carry 20kg on their shoulders and basically run up and down the volcano. Wearing flip flops. How they do it I don’t know.

I felt elated to have reached the crater rim so quickly (with the first person from my group arriving 40 minutes later), but the view of the volcano I was anticipating was completely covered in cloud. It felt like a bit of an anticlimax after all that effort. But this episode of disappointment would soon be forgotten.

After the others and the guide arrived we walked a bit further up for our campsite. This is when I found something I had been expecting, but which I didn’t think would bother me this much – the litter. The campsites were covered in litter and based on how much there was I could tell that a lot of it had remained there for a very long time. I knew that litter was a problem based on reports I’d read online, but seeing so many plastic wrappers and bottles strewn across a natural wonder was a sad sight. Some of the trekking companies make a concerted effort to put the principle of ‘leave no trace’ in practice, but I think the Indonesian government really needs to invest more in protecting the national park. The benefits in terms of revenue from tourism might not be immediate and obvious, but to leave the park in the state it’s in is disrespectful, in my opinion. Nevertheless, the sorry sight of litter at the campsites and break points didn’t stop me from appreciating the unique beauty of the place.

After dinner, it was time for the first breathtaking experience on Mount Rinjani: sunrise on the crater rim. The clouds had now given way to a view of the smaller volcano, on the lake, in the larger volcano. We were above the clouds now, so as the sun was setting it created a surreal picture of a rainbow-tinted sky, with the crater rim peeking above a sea of clouds. The colours changed the further the sun went down, so I kept walking back and forth between viewpoints trying not to miss any of it. When it got a bit darker and colder, I decided to call it a night – a wise decision since I had to wake up at 1 am to trek to the summit.

The Stair Climber From Hell

It was not a comfortable sleep as it progressively got very cold, so after I awoke from a half-sleep daze, I woke up desperately trying to sleep in a warmer position, eventually putting my head in the sleeping bag as well and going into the fetal position. (Don’t make the same mistake I did – if you camp anywhere where it will likely get chilly overnight, be sure to bring a decent sleeping bag liner.) My alarm went off at 1 am, and despite only having three hours (at most) of sleep, I felt ready to face the challenge ahead.

Our guide Gus said that it takes about three hours to reach the summit from the crater rim. The first two hours were by no means easy – it involved a lot of two steps forward and one step back due to the loose rocks and volcanic ash on the ascent. At some points, I was actually walking – quite vigorously at that – but staying in exactly the same place. This, combined with the steepness, made it feel like I was on a stair climber from hell. I felt determined to make it to the summit, so I overtook my group and guide, and others struggling with the torturous terrain. After a couple hours, I knew for sure that I would make it to the summit (I had read and heard about a lot of people giving up halfway through). However, the last hour was really something else.

It was even steeper and now there were no large, stable rocks to place my foot to prop myself up. The stair climber from hell was turned up a notch. Then suddenly, a realisation dawned on me – I could actually be the first one to the summit. I had already overtaken 20 or so people, and there were only a handful of groups left ahead of me. If I could muster all the energy I had and really push myself, I could try to overtake the remaining trekkers. And eventually, I did.

Now I was just praying that there wasn’t someone way ahead of me or some ridiculously fast hiker already at the summit. I kept turning back to make sure I was a good distance apart from the person behind me. I was really exerting as much energy as my body would allow and not taking any breaks. Each step up felt like that really painful last rep you do when doing squats. The summit was absolute torture.

Amidst the pain and constant panting, it felt like I was experiencing a flow state – a term in psychology used to characterise a mental state in which a person is completely absorbed in what they’re doing. At times all I was concentrating on was the motion of lifting my legs up and looking for an indent in the ground to securely place my foot. I managed to partly avoid this whole two steps forward one step back business by becoming quite good at spotting these indents. It felt like I was in some sort of hiking video game, with the people behind me looking to beat me to the top, and me fully engrossed on the task at hand, and the simple procedures needed to complete that task.

The inner monologue in my head turned hyper-motivational. It was as if a drill sergeant or coach was sitting in my head, demanding more of me, yelling to keep going, not to give it up. This wasn’t in any mean or bullying manner. My determination to be the first to summit just somehow animated an inner source of willpower that I didn’t know I had. Through sheer resolve, I was able to push myself beyond what I thought I was physically capable of.

The person behind me was now far enough behind that I knew they wouldn’t overtake me. I relaxed a little but continued to push on until I saw the summit mere metres away from me. I calmly walked to the edge overlooking the entire lake and I just laughed to myself – I couldn’t believe I was actually the first person to make it. The euphoria was incredible (no doubt influenced by the release of endorphins). Standing at the summit was, undoubtedly, a peak experience, and probably the proudest of myself I have ever been.

The only downside was that it was freezing at the summit. The time was 4:40 am, so I still had a while until sunrise – just under an hour. But I enjoyed the serene atmosphere of being completely alone, having the summit to myself for a while. The next person arrived 10/15 minutes later, one of the French girls in my group. I was impressed she got there so quickly as well since she also had zero hiking experience like me. As more and more people arrived the sky became progressively lighter and the view of the lake clearer and more defined.

The sky was changing from black dotted with stars, to dark blue, to bands of light pinks, yellows, and blues. As the sun rose from the ocean of billowing clouds, it cast a triangular shadow in the sky, above the crater rim. The sight was unreal – it looked like a giant ethereal pyramid was taking form. As I was soaking in all the different transformations the landscape was taking while the sun was rising, more people arrived. The summit started to become slightly crowded, so I felt like it was time to head back down. Going back down proved to be difficult in its own right – you had to use a sliding technique rather than actual steps. It wasn’t as strenuous as the ascent, but you had those continuous moments of panic where you thought you would slip and fall over.

And the day was by no means over once I made it back to the campsite. No, despite the fact that the ascent to the summit was the most physically taxing thing I’ve ever done, I still had another six to seven hours of trekking ahead of me. In addition, a lot of this trekking was downhill, which might not sound as bad as uphill, but for me, I found it a lot worse. It took a real toll on my knees and toes, and the ground was steep and full of large rocks, so you had to really concentrate where you placed your foot if you didn’t want to slip and fall. I could barely keep my eyes open. I just wanted to sleep. At the 12th or 13th hour of trekking that day, I had honestly had enough and was walking at a snail’s pace due to mental and physical exhaustion, and soreness in my knees and toes.

I found it difficult to sleep that night, partly because of how cold it was, and partly because any position I tried to sleep put pressure on my aching legs. My legs felt like two giant bruises. Luckily the third and final day was a walk in the park – or I should say a walk in the jungle. One side of Rinjani is covered in Savannah, while the other is covered in jungle, the inhabitants of which include the long-tailed macaque monkey, the rare Ebony leaf monkey (which we were lucky to see a few of) and various species of birds and butterflies. In spite of not wanting to do any more walking for a very long time, I found the trek through the jungle quite peaceful and rejuvenating.

As we reached the car to take us back to the trekking centre in Senaru to pick up our bags I felt relieved that it was all over. All I wanted to do was take a much-needed shower, flop onto a bed, and not move for a very, very long time. Hiking Mount Rinjani broke me physically. But it also taught me the importance of harnessing willpower and motivation in order to overcome challenges and achieve one’s goals.