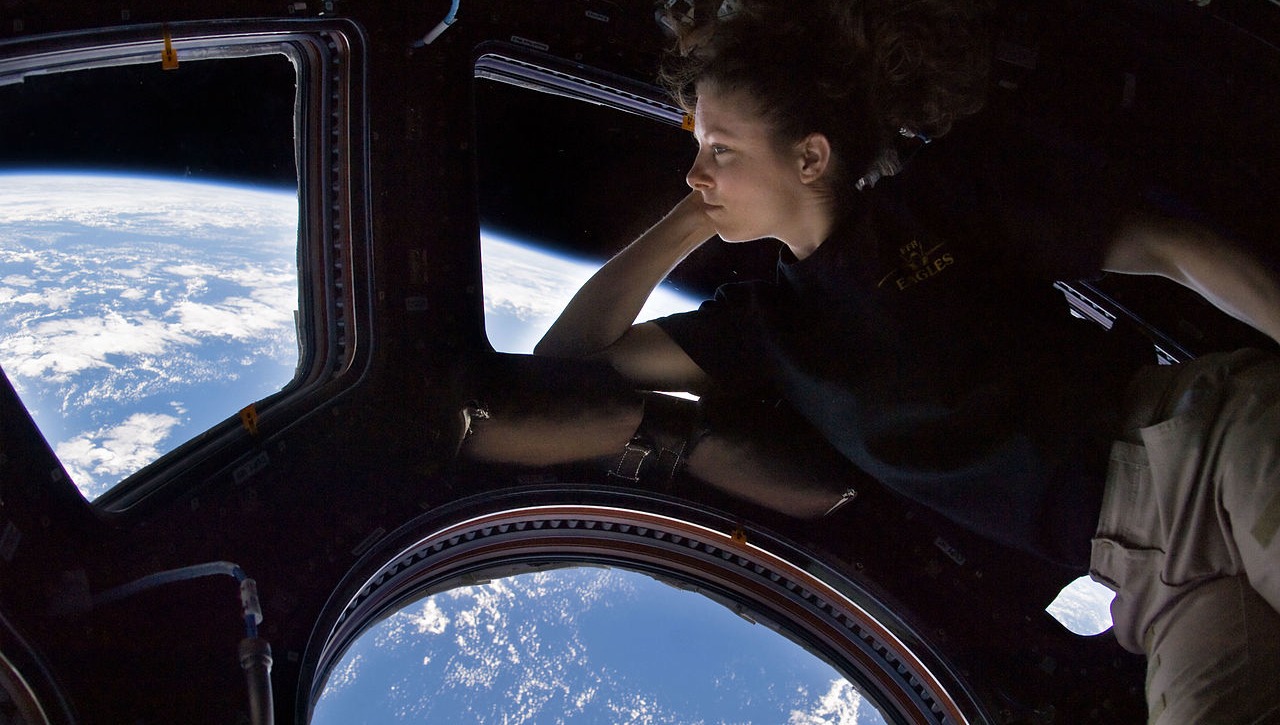 The writer Frank White popularised the term ‘overview effect’ in his book The Overview Effect: Space Exploration and Human Evolution (1987). This effect is the cognitive shift in awareness that takes place when viewing the Earth from space. Based on the records of hundreds of astronauts, as well as interviews with dozens of space explorers he conducted himself, White concluded that astronauts speak differently about the Earth when they return.

A Different Kind of Awareness

Upon seeing the Earth from orbit or the lunar surface, many astronauts have realised – directly and deeply – that the Earth is tiny, fragile, precious, and must be protected. The alarming depletion of natural resources and destruction of ecosystems runs counter to this worldview. NASA astronaut Ron Garan describes the overview effect in his book The Orbital Perspective:

As I approached the top of this arc, it was as if time stood still, and I was flooded with both emotion and awareness. But as I looked down at the Earth — this stunning, fragile oasis, this island that has been given to us, and that has protected all life from the harshness of space — a sadness came over me, and I was hit in the gut with an undeniable, sobering contradiction.

In spite of the overwhelming beauty of this scene, serious inequity exists on the apparent paradise we have been given. I couldn’t help thinking of the nearly one billion people who don’t have clean water to drink, the countless number who go to bed hungry every night, the social injustice, conflicts, and poverty that remain pervasive across the planet.

And in Overview, a short film by the Planetary Collective, Garan said:

It really does look like this really beautiful oasis out in the middle of nothingness.  And if you have a chance for your eyes to adjust, and you can actually see the stars and the milky way, it’s this oasis against the backdrop of infinity – this enormous universe behind it.

The overview effect is a rare, mind-altering experience. Seeing Earth from space can stir up intense feelings of compassion and oneness, and allow you to appreciate the planet in an extremely profound sense. This cognitive shift in awareness may be temporary, yet it seems to create significant, long-term changes in people’s personal outlooks and attitudes. Since experiencing the overview effect, astronaut Chris Hadfield has been compelled to share this unique perspective of our shared home. He confidently insists that the overview effect can help us make wiser decisions for ourselves, and the planet as a whole.

For many astronauts, the overview effect is felt as emotionally overwhelming, self-transcendent, and spiritual. It is an experience of awe like no other. Astronaut Edgar Mitchell said his mystical experience in space was comparable to savikalpa samadhi, an altered state of consciousness that is achieved by yogic practices. In this state, described in the ancient text The Yoga Sutras of Patanjali, you experience bliss, ecstasy, total unity, and oneness. For Mitchell, his outlook was changed forever:

You develop an instant global consciousness, a people orientation, an intense dissatisfaction with the state of the world, and a compulsion to do something about it. From out there on the moon, international politics look so petty. You want to grab a politician by the scruff of the neck and drag him a quarter of a million miles out and say, ‘Look at that, you son of a bitch.’

Neuroscientist Andrew Newberg said: “You can often tell when you’re with someone who has flown in space, it’s palpable.” Philosopher David Loy wrote that being able to look back at ourselves “…seems to imply a kind of self-awareness.”

The Overview Institute was set up in order to connect the world into one community – a ‘global village’. And it does this by communicating and promoting the overview effect. One way in which to offer the overview effect to others, and increase planetary awareness, is through commercial spaceflights.

Space Tourism and the Overview Effect

Virgin Galactic is developing a commercial spacecraft in order to offer people (not just astronauts) the overview effect. The company believes that exploring space makes life better on Earth. Richard Branson, the business tycoon and founder of Virgin Galactic, emphasises that the VSS Unity spacecraft, designed for space tourism, could help to foster this powerful state of consciousness. He said:

The pathway that Unity is forging is one that many thousands of us will take over time, and will help share a perspective that is crucial to solving some of humanity’s toughest challenges on planet Earth.

Only about 550 people have ever visited space. But Virgin Galactic highlights how 700 future astronauts from over 50 different countries have already paid their deposits for their flights on its commercial spacecraft.

However, while Virgin Galactic may boast about the diverse range of people who will get to experience the overview effect, it is still only a viable option for the super-rich. A seat costs around £200,000. Only the tiniest fraction of the world’s population have that kind of spare cash floating about for this unique experience.

Another company, World View, is planning to take passengers up to “the edge of space” via balloon. Passengers will be able to see a stunning view of the stars, the black vastness of space, and the curvature of the Earth. This perspective can elicit the overview effect and instil a passionate belief in the need to sustain the planet. But like with Virgin Galactic, you will need a large sum of money (about £60,000) to fund this potentially life-changing trip. But at least that’s not as expensive as Virgin Galactic flights, so it definitely offers the experience to more people.

Many highly profitable industries are responsible for large-scale environmental degradation and greenhouse gas emissions. If the chief executives of the biggest corporations in these industries wanted to treat themselves to a trip to space, they might return with a mission to promote sustainability. They might want to enact real change in the world based on their planetary awareness. The ideal people to experience the overview effect would be the world leaders, politicians in charge of environmental policy, and the chief executives of the fossil fuel industry, the food and drinks industry, the transport industry, and the farming industry.

We have to be able to subsist, thrive, and enjoy life in a way that is in harmony with the Earth’s ecosystems and natural processes. But individual change is just one piece of the puzzle. Those who can affect the most change in the world need to have as much incentive as possible to promote sustainability over profits – and space tourism could play a unique role in this respect.

This might be overly optimistic. Nevertheless, space exploration will be available to people who aren’t trained astronauts. And while only the super-rich and wealthy will be able to afford trips to space at first, advances in technology in the future may allow many more people – and many more influential people – to view the Earth from this unique vantage point. Space tourism could be a powerful antidote to the planetary mess that we’ve created.

Seeing Earth Suspended in a Sunbeam

It could be argued that the further away you view the Earth, the stronger the overview effect will be. Getting to grips with the Earth’s place in the universe is invaluable. The more you understand how infinitesimal our planet is, the more precious it becomes. When delivering a public lecture at Cornell University in 1994, the astronomer Carl Sagan drew the audience’s attention to a photograph of planet Earth taken by the Voyager 1 space probe from a record distance of about 3.7 billion miles. Sagan then eloquently expressed the implications of this photo:

We succeeded in taking that picture [from deep space], and, if you look at it, you see a dot. That’s here. That’s home. That’s us. On it, everyone you ever heard of, every human being who ever lived, lived out their lives. The aggregate of all our joys and sufferings, thousands of confident religions, ideologies and economic doctrines, every hunter and forager, every hero and coward, every creator and destroyer of civilizations, every king and peasant, every young couple in love, every hopeful child, every mother and father, every inventor and explorer, every teacher of morals, every corrupt politician, every superstar, every supreme leader, every saint and sinner in the history of our species, lived there on a mote of dust, suspended in a sunbeam.

The Earth is a very small stage in a vast cosmic arena. Think of the rivers of blood spilled by all those generals and emperors so that in glory and in triumph they could become the momentary masters of a fraction of a dot. Think of the endless cruelties visited by the inhabitants of one corner of the dot on scarcely distinguishable inhabitants of some other corner of the dot. How frequent their misunderstandings, how eager they are to kill one another, how fervent their hatreds. Our posturings, our imagined self-importance, the delusion that we have some privileged position in the universe, are challenged by this point of pale light.

Our planet is a lonely speck in the great enveloping cosmic dark. In our obscurity – in all this vastness – there is no hint that help will come from elsewhere to save us from ourselves. It is up to us. It’s been said that astronomy is a humbling, and I might add, a character-building experience. To my mind, there is perhaps no better demonstration of the folly of human conceits than this distant image of our tiny world. To me, it underscores our responsibility to deal more kindly and compassionately with one another and to preserve and cherish that pale blue dot, the only home we’ve ever known.