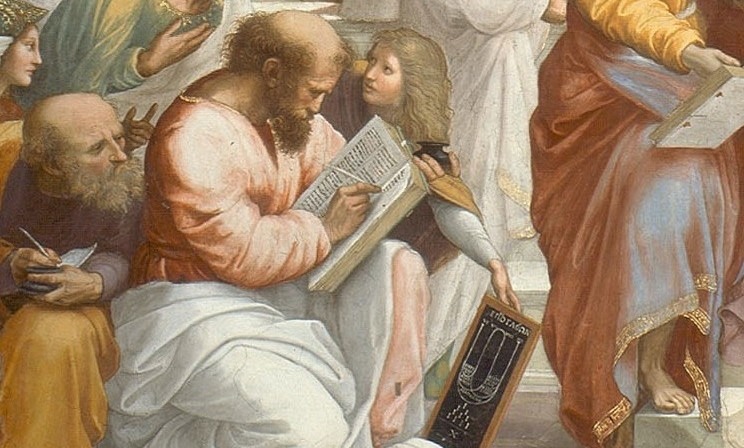 Pythagoras was an ancient Greek philosopher who founded Pythagoreanism, a school of thought that is heavily influenced by mathematics and mysticism. The ideas of Pythagoras would prove to be a huge influence on both Aristotle and Plato and, in turn, the development of Western philosophy. Pythagoras (or his movement) is credited with many mathematical and scientific discoveries, such as prime numbers, composite numbers, the Pythagorean theorem, Pythagorean tuning, the five regular solids, the Theory of Proportions, and the fact that the Earth is a sphere.

Pythagoras also postulated that the meaning behind numbers was deeply significant. Indeed, the Pythagoreans believed that all things were made of numbers.

Let’s examine what sacred meaning the Pythagoreans ascribed to some of the numbers from 1 to 10.

For the Pythagoreans, the monad (a symbol consisting of a dot with a circle drawn around it) represents the number one. Pythagoras believed the monad was God and the Good. The monad (or unity) is the origin and generator of all things. It is the principle of stability since it preserves the identity of any number that it interacts with – if you multiply or divide any number by one, it remains the same.

The number two (the dyad) is the principle of ‘otherness’ and represents matter. Greek philosophers referred to the dyad as ‘audacity’ because of its bold separation from the one, but also ‘anguish’, due to its state of tension and desire to return to the one. The philosopher Aetius wrote:

Pythagoras held that one of the first principles, the monad, is god and the good, which is the origin of the One, and is itself intelligence; but the undefined dyad is a deity and the evil, surrounding which is the mass of matter.

The triad symbolises the number three and was considered a perfect number by Pythagoras because it had a beginning, middle, and end. The triad represented concepts such as proportion, harmony, and perfection.

The number four signified the four seasons and the four elements, and is associated with justice. Five represents marriage because it is the sum of two and three (the Pythagoreans believed that even numbers were masculine and odd numbers were feminine).

The number seven held a sacred meaning since it correlated with the number of classical planets (those celestial bodies visible to the naked eye: the Sun, Moon, Mercury, Venus, Mars, Jupiter, and Saturn), as well as the number of strings on a lyre. Also, the sun god Apollo’s birthday was celebrated on the seventh day of each month.

The Pythagoreans regarded 10, which contains all the numbers, as the holiest number. It is associated with the ‘tetractys’, an equilateral triangle figure consisting of 10 points arranged in four rows of 1,2,3, and 4. They would address a prayer to the teractys, which illustrates its importance and sacred significance to Pythagoras’ followers:

Bless us, divine number, thou who generated gods and men! O holy, holy Tetractys, thou that containest the root and source of the eternally flowing creation! For the divine number begins with the profound, pure unity until it comes to the holy four; then it begets the mother of all, the all-comprising, all-bounding, the first-born, the never-swerving, the never-tiring holy ten, the keyholder of all.