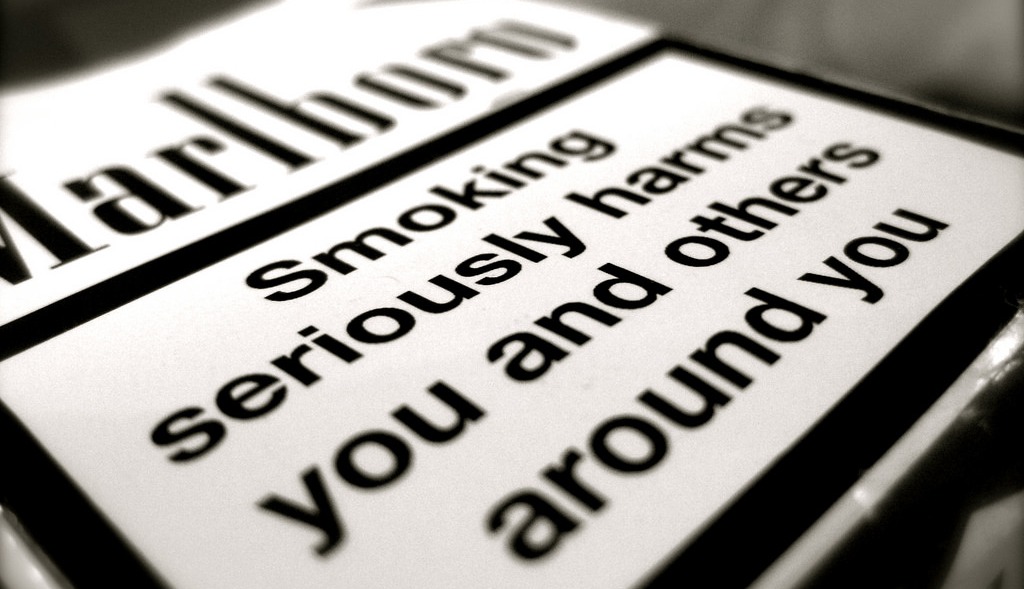 John Stuart Mill in On Liberty argued that individuals should have the personal liberty to harm themselves, so long as their actions did not harm others. He was all for the free availability of harmful substances, such as alcohol and other drugs, but urged for the “labelling the drug with some word of expressive of its dangerous character”. The effect of these warning labels would be to inform consumers of the facts so that they choose to avoid said substance, without being prohibited from the option of taking it in the first place.

With current warning labels on cigarette packets (‘Smoking kills’, ‘Smoking causes fatal lung cancer’, etc.) and advice from alcohol advertisements to ‘Drink responsibly’ and to not drink and drive, Mill would probably be satisfied with how things are being done. I completely agree that the general public should be informed and educated about the risks and harms of cigarettes, alcohol, junk food and other drugs, but it’s worth asking: Are warning labels necessary? Do they really work?

Statistics suggest that there is an overall decline in rates of cigarette smoking in the UK, of course with there being variations which depend on age, profession, economic activity, sex and socio-economic background. The reasons for this decline are manifold. One of the reasons would be down to the Tobacco Advertising and Promotion Act (2002) brought in by the Labour government which covers direct advertising such as posters, billboards and press releases, as well as indirect advertising, at events for example. (Televised adverts of cigarettes were banned in 1965). Furthermore, vending machines selling cigarettes were banned in 2011.

There is, however, a slight inconsistency in this anti-smoking campaign since similar bans do not apply to alcohol, which, although it kills fewer people, is undeniably harmful. Another reason for declining cigarette use could be down to the ban on smoking in public places that came into effect in 2007. Other reasons could include better education and pressure from anti-smoking groups such as Action on Smoking and Health.

I have never seen a smoker look at a warning label or some graphic image of a blackened lung and throw their pack of cigarettes away. But there is still evidence that cigarette warning labels are in some sense effective. A study published in the American Journal of Preventive Medicine found that 83% of the participants were able to remember a warning on a cigarette packet if it was accompanied by a graphic image, while only 50% remembered the warning when there was no graphic image. Dr Andrew Strasser who headed the study said graphic images (i.e. those lovely photos of gory throats and rotting teeth) will make people better informed about the health risks of smoking.

Another study published in PLOS ONE found that pictorial graphic warnings are more effective than text-only versions, with smokers indicating the labels as more impactful and having a greater effect on their intentions to quit. But again, there is a discrepancy between warnings for tobacco and alcohol – why are there not pictures of diseased livers on alcoholic drinks? Not to say that there should be, but it’s just strange that the same rules don’t apply to alcohol; I suppose because it’s more socially acceptable.

Despite this, many are not convinced that these graphic warning labels have any noticeable effect and can in actual fact be counter-productive. In a study published in Psychological Science titled Warnings of Adverse Side Effects Can Backfire Over Time (2013), the researchers found that although warning labels on cigarettes can reduce a desire for them pretty much immediately; in the long term, the desire to purchase them actually increases. Some weeks after viewing the warning label, participants were far more likely to purchase the cigarettes compared to those who didn’t see the warning label. The researchers theorise that this is because the warning label assigns a sense of trustworthiness to the brand – ironically it is the brand’s honesty about its risky products which lead people to buy them in the distant future. So it may be that warning labels are effective on a short-term basis, but not a long-term basis (the basis which truly matters for smokers trying to quit).

Let’s move on to the subject of plain, standardised packaging for cigarettes. The UK government is keeping a watchful eye on Australia’s implementation of plain packaging for cigarettes to see how effective it is in reducing rates of smoking. Dianne Abbott, Shadow Health Minister and proponent of the Nanny State, criticised the government for not implementing the measure immediately. The full governmental report on this debate can be read here.

Unsurprisingly, this proposal has received a lot of opposition from the Tobacco Industry. Jaine Chisholm Caunt, the secretary-general of the Tobacco Manufacturers’ Association did, however, make the valid point that plain packaging would make counterfeiting cigarettes a lot easier. In addition, plain packaging, which involves the removal of the brand name, as well as its design and colours, amounts to censorship – tobacco companies, however harmful they may be, have a right to publish their trademark. Should all alcoholic drinks and junk food also be plainly packaged? I don’t think so. Many libertarians are against this plain packaging proposal because it involves a nanny state government regulating consumer choices. Whether plain packaging would reduce smoking among young people, of which there is conflicting evidence, would be irrelevant for many libertarians.

Another controversial issue is whether junk food should have warning labels like cigarette packets do. Should junk food and fast food carry labels such as ‘[Insert product] can lead to clogged arteries, heart disease, obesity, diabetes, and many other harmful physical conditions’? There is no doubt that someone who habitually eats sweets, chocolate, fizzy drinks high in sugar, foods high in salt and McDonald’s will be leading an unhealthy and life-threatening lifestyle. (McDonald’s do however make the nutritional content of their food freely available, so you can see for yourself how high in fat and calorie-rich their food is).

On the other hand, having warning labels on food is tricky due to the fact that many other factors can contribute to health issues. Junk food can contribute in a big way to such diseases, but other factors such as lack of exercise, lifestyle, lack of nutritious foods and genetics can also play a part. If there was to be a label, it would have to read something like: “Overeating [name of the product], without a balanced diet and regular exercise can lead to diabetes, obesity, and so on). It would be unfair for there to be labels saying that ‘This food kills’ since it is possible to eat junk food every now and again and still be fit and healthy.

Last year several doctors from Ontario Medical Association urged for there to be warning labels on junk food, with graphic images such as a foot with an open wound (a problem that people with diabetes may suffer) and a liver riddled with fatty liver disease. Why not have images of obese people as well? These doctors are calling for fatty foods to be subject to higher taxes, but this is in no way justifiable – it would serve to harm low-income families. Whether warning labels on junk food would be effective remains to be seen.

A case can be made for keeping warning labels on cigarettes since unlike alcohol and junk food, they cannot be part of a healthy lifestyle. It is questionable, however, whether graphic warning labels have a long-term effect on reducing smoking. They could very well scare some potential smokers from taking up the habit, but I doubt whether existing smokers would be put off by them. In my opinion, warning labels should be there to inform the consumer with the correct information about the product and offer useful advice. For example, in Holland ‘magic truffles’ come with a warning label urging the consumer to take the psychedelic drug in a peaceful environment and not to take them if they have emotional disorders. Information on dosage and effects is also provided.

With any product, there needs to be complete transparency of information. The general public needs to be aware of the fact that more than 4,000 chemical additives are created by burning a cigarette, including carbon monoxide, formaldehyde, hydrogen cyanide, arsenic and DDT. Detailed nutritional information should also be easily accessible in fast food outlets so that consumers can make an informed decision about what to eat. Furthermore, if children were educated from a young age about the risks and harms of various lifestyle choices, in an honest and evidence-based manner, then they will be more equipped to make rational choices in the future.

Scare tactics and fear mongering might have a moral agenda behind it, but I think in some cases it can backfire – it can create a ‘forbidden fruit effect’, where the demonisation of something encourages children to seek it out. And on a final note – not enough emphasis is placed on the responsibility of parents. Parents are meant to protect the welfare of their children and they do in some sense behave irresponsibly if they take them to McDonald’s all the time or if they fail to teach them about why a healthy lifestyle is worthwhile and beneficial. We really shouldn’t have to rely on the State to direct our lifestyle choices.

the tobacco and alcohol industries want warning labels – they prevent consumers trying to sue the company for any harm caused by their products. The lawyers working for these industries would have definitely backed warning labels.