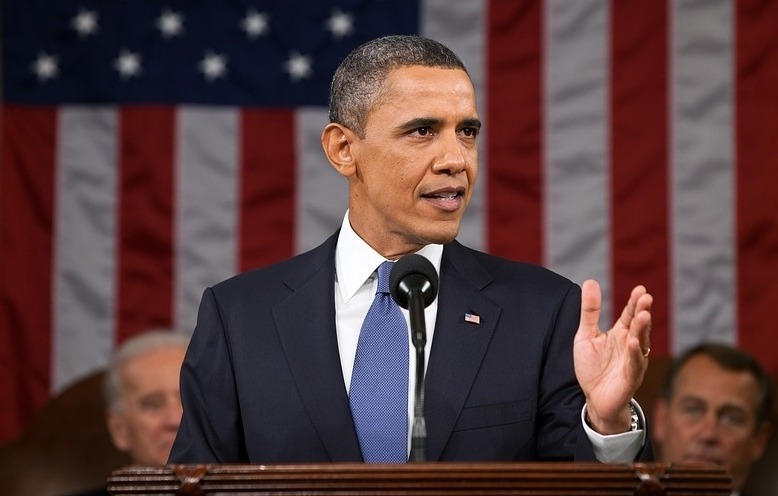 President Obama made an address on September 10th to the nation of Syria. The first point of criticism is that the speech is over-dramatic and theatrical – it just seems so obviously rehearsed. Obama takes on the role of actor, more than President here; making emotional arguments instead of rational ones.

The second point of criticism (and the more relevant one) is the level of hypocrisy expressed. Obama refers to how horrific chemical weapons are, which cannot be doubted:

…on August 21st, when Assad’s government gassed to death over a thousand people, including hundreds of children. The images from this massacre are sickening: Men, women, children lying in rows, killed by poison gas. Others foaming at the mouth, gasping for breath. A father clutching his dead children, imploring them to get up and walk. On that terrible night, the world saw in gruesome detail the terrible nature of chemical weapons, and why the overwhelming majority of humanity has declared them off-limits — a crime against humanity, and a violation of the laws of war.

What I struggle to understand is that, if chemical weapons are a “crime against humanity” or a “violation of the laws of war”, then why not drones and bombs as well? The astrophysicist, Neil DeGrasse Tyson, also tweeted about this inconsistency in Obama’s position. He said, “I’ve never understood those who assert that killing people with chemicals is worse than blowing them to bits with a bomb.” DeGrasse Tyson further highlighted this inconsistency by referring to the plain scientific facts: “Not that anybody asked, but a traditional bomb is nothing more than an explosive concentration of unstable chemicals.” Bombs, which the US military have no issue in dropping, are technically chemical weapons as well. Chemical weapons kill by gas, bombs kill by fire. Is there really any moral distinction between the two?

The coverage of chemical weapon use in Syria gives the impression that the sarin gas used by Syrian rebels does result in long-lasting suffering. Maybe sarin gas does lead to a more painful death or, if the person survives, a life of abject misery caused by deformities. This may all be true. And the worst cases of these chemical attacks have been on innocent children. But it still remains the case that the US military has Obama’s full support in their use of drone attacks. These drone attacks have resulted in a hugely disproportionate number of civilian deaths (including children). People who aren’t killed by drone attacks may likewise suffer from physical deformities and injury.

A recently leaked Pakistani report shows that out of the 746 people listed killed in 75 CIA drone strikes, at least 147 are civilians, and 94 of those are said to be children. For more on this story, check out this article. The information in this secret document runs counter to claims from the US that only a tiny number of civilians are killed in drone strikes. An even more frightening estimate for civilian deaths by drone strikes is 50 for every 1 killed. This means that 98% of drone strike casualties have been civilians.

A study published by Columbia Law School’s Human Rights Clinic, entitled Counting Drone Strike Deaths, also found a mismatch between the US government’s estimates and more realistic estimates. Using the minimum casualty figures, they counted 2300% more civilian casualties than reported by the New America Foundation, 140% more than those reported by the Long War Journal. All of the sources, methodology and criteria used for assessing civilian deaths can be found in the study.

In another report published in September 2012, The Civilian Impact of Drones, the researchers concluded that covert drone warfare enjoys political support because it is considered as a cheaper and less bloody (for US military personnel) than the strategies that were pursued in Iraq and Afghanistan. US Administration officials have claimed that drone strikes can remove Al Qaeda affiliates without affecting civilians in the area. However, this is unproven.

Obama can decry chemical weapons all he wants – his government has still been responsible for causing more civilian deaths than terrorist deaths through CIA drone strikes. What’s worse is that the US government has not been honest and transparent about the extent of civilian deaths. In Obama’s address to Syria, he claims that the use of chemical warfare is a “danger to our security” and that this, along with a “violation of international law”, justifies a “targeted military strike”. Obama believes that US military intervention will put a stop to the use of chemical weapons, but there are definite risks as well. The first obvious risk is the failure to stop Assad’s chemical warfare, which could lead to even more US military action. Even worse than that would be retaliation from Syria (which is not an unrealistic outcome), as well as terrorist attacks against the US military and its allies.

This decision also involves is a bit of a double standard. Firstly, it is not entirely clear how the Syrian conflict is a threat to US national security. Furthermore, if poison gas in Syria is a threat to the US, are drone attacks not equally a threat to the countries in which they are being deployed? Are these countries not also justified in intervening against US military action for their national security? I would also say that, given the highly disproportionate number of civilian deaths caused by drone attacks, the Obama Administration may be guilty of war crimes itself. In any case, Obama asked the US Congress to put off the vote for military action for the time being in order to let diplomacy play out.

President of Russia, Vladimir Putin, warned against a US military strike on Syria. He said it could risk “unleashing a new wave of terrorism”. He points out that the US has a poor track record when it comes to intervening in a foreign conflict, which is undoubtedly true. Russia plans to confiscate Syria’s chemical weapons, but have urged that military action would be “a crime against the Syrian people”. According to Putin, a diplomatic resolution is needed with the Assad government so that they give up their chemical weapons, but this aim cannot be achieved if the US intervenes. President Obama, however, still asked senators to “keep the threat of credible military action available”, while US Secretary of State, John Kerry, remarked that only a “credible use of force” threat can push for a diplomatic solution.