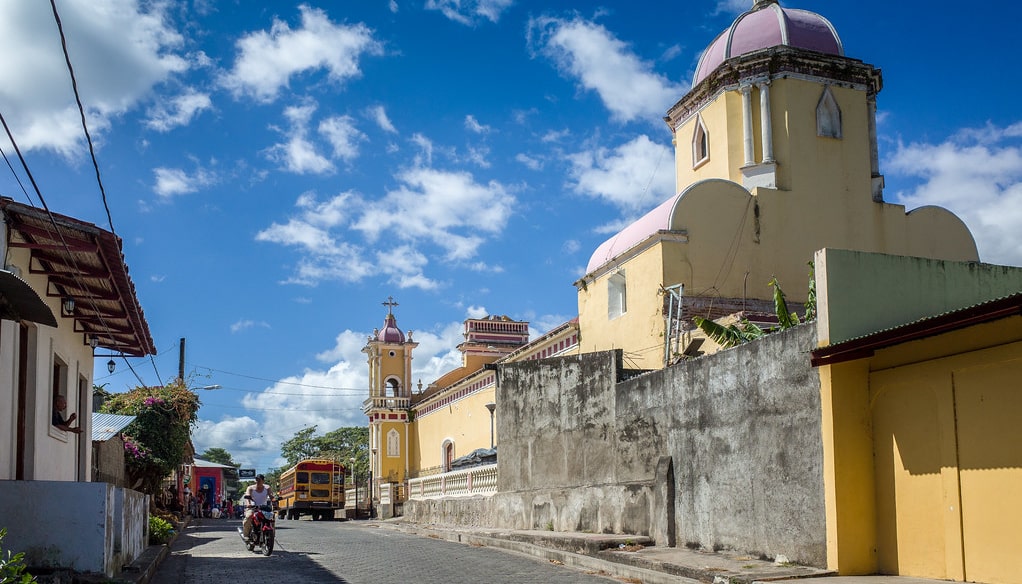 Nicaragua wasn’t a country I planned to visit during a round-the-world trip I did in 2015/16. I was intending to spend some time volunteering on an organic farm in Costa Rica, but this no longer seemed appealing as the date to start farming drew closer, so I changed my plan and embarked on a fairly long bus journey from San José, the capital of Costa Rica, to Granada, Nicaragua’s sixth-largest city, well known for its colourful, colonial architecture. I also didn’t plan on visiting a witch in Nicaragua, but first I’ll give some background context as to how that unfolded.

In the hostel I was staying in, in Granada, I got talking to Facundo, an Argentinian guy, whose story I found quite interesting. He became an entrepreneur at the age of 17, then eventually saved enough money to travel by bicycle from Argentina to Ecuador for three years and, when I met him, he was on an indefinite trip around the world. He was driving a 4×4 with all the amenities you need – fully reclining seats, gas-powered stove and, last but not least, a bouncy castle. Although the bouncy castle wasn’t there for his own entertainment.

Facundo was visiting local orphanages and deprived communities and setting up the bouncy castle for the kids. This project of his is still going; it’s called Expedición Sonrisa and it seems to have really flourished since Facundo started the project in 2014, which was when I met him. As well as Latin America, Facundo has travelled through Africa with his bouncy castle and has moreover added a team of people to Expedición Sonrisa.

I spent a great couple of days with Facundo, who was always very open to speak with locals and get to know them. He got talking to a 60-year-old man in the city centre who sings and plays the guitar to raise enough money to support his 1-year-old, as well a mother, who unfortunately recently turned to prostitution in order to support her three kids. Facundo invited the woman to sit down with us and soon after explaining her story, and reason for doing what she was doing, she began crying.

As beautiful as Granada is, there is no forgetting that Nicaragua is a developing country and people don’t easily and comfortably fall into work which pays enough to meet their needs. It was a sobering experience to hear this woman’s story. While prostitution may be legal in Nicaragua, the country also has a significant problem with sex trafficking, with victims working in urban centres, such as Granada. There is also the disturbing problem of child prostitution and sexual exploitation, which I became aware of at my time of arrival, as I saw a poster in my hostel that warned of the issue.

As is customary in any travel small talk, one morning Facundo and I discussed our plans for Granada. I mentioned I read about a town close by called Diriomo, which is twinned with another city called Diriá, separated from Diriomo by a highway. Both towns are known as ‘witch cities’, with Diriomo specifically known as the Witch Capital of the Meseta. In these towns, you can find brujos (male witches) or brujas (female witches) practising brujería (witchcraft). This kind of witchcraft, found in Latin America, is influenced by indigenous religion, Catholicism, and European witchcraft – and when used for benevolent purposes is considered white magic and if used for harmful purposes is classed as black magic. Most healers in these towns work out of their homes, which are in no way signposted as places of witchcraft.

After telling Facundo about Diriomo, a town of 10,000 people, he discovered a video about a famous white magic witch living there, called Andrea Peña (this may be the video). He said, “We have to find her!” Being sceptical of any supernatural claims, I knew I would waste my money in the hope of any sort of ‘healing’, but I was still curious. In my head I was thinking, does she really believe she has mystical powers or is it all a performance?

We planned to hike up Mombacho volcano later in the day, which was 10km from Granada city, but before then, me, Facundo, and Stefan (a German guy who we met at the hostel the night before) got into Facundo’s 4×4 and off we went to visit Diriomo to try to find Peña. Based on what I read about the town and the video I watched about Peña, I was expecting Diriomo to be a bit creepier, but that probably goes to show the preconceptions I had about witchcraft were misplaced. As we drove in, the town seemed very quaint, with a pleasant main square and colonial church. There were no tourists in sight and only a small number of locals out and about. Facundo’s car was definitely getting some odd looks.

As we were exploring the church, Facundo got chatting to a mother and son outside, and as I approached he said that the son would take us to Peña. We arrived at her house and the son walked off with the chocolate bar Facundo had given him. We walk in and see a slightly overweight man sitting lackadaisically in a rocking chair. The room is surrounded by Christian paintings and statues, and many more rocking chairs. The man leads us to a room, draws back a red curtain, and tells us to enter.

And there I see the woman I recognise from the video. 67-years-old at the time, she was wearing austere clothing and had a slightly tired look in her eyes. She sat in a small, cluttered room, abound with more Christian iconography (ironic since Christianity has traditionally condemned witchcraft, but this was, after all, a more syncretic form of witchcraft, combining both the influences of Christianity and European witchcraft). In the room were also various ointments, herbal remedies, and a decent-looking stereo.

Since I spoke and understood very little Spanish, Facundo did all the necessary communication and translating. He explained that I could either have my palms read or receive my diagnosis with tarot cards – both for 200 Cordobas (about £5). I was vaguely interested in the symbolism of tarot, so I opted for that, just to see what some of the images of the cards meant. Peña shuffled the deck, slid it across to me, and asked me to separate it into three piles. Once I did that, she took that pile and arranged the cards, facing down, into a pyramid shape. Then she asked me to flip over the cards, one by one.

After that, she organised the cards into columns, based on rules I wasn’t aware of. When she was finished, she began to tell me what my problem was and what I needed to do to fix it. Just to re-iterate, she was a white magic witch, so her profession entails healing people as opposed to harming people with curses, which is what the black magic witches practise in Diriomo.

Rather than telling me anything ominous (which is kind of what I hope for, strangely), she told me – well Facundo told me – that my “house needed cleaning”, which I can only interpret metaphorically to mean my body or mind. If it was meant literally, then it is kind of meaningless, since I was not currently living in a home per se, unless I needed to clean my room in the hostel. I don’t know whether this reading of my ailment was actually related to the tarot cards; it was vague enough to apply to anybody and be interpreted in any fashion, as happens with the universally applicable descriptions found in astrology columns.

If her diagnosis was underwhelming, at least her remedial advice was weird enough. She told me to take a bath, three days in a row, but with cinnamon, manzanilla (Spanish for chamomile) and romero (rosemary): a very random and peculiar cure for my ‘dirty house’. Peña also said that once my house is clean, then women will flock to me. Brilliant! I can honestly say that I didn’t think much about ‘cleaning my house’ or taking said bath, but I’m glad I got to see how these witches operate.

Facundo’s experience was curiously similar (he had his palms read instead, which took no longer than a couple of minutes). Although his life seemed to be in more order than mine – I guess his house is cleaner – he was still advised to take the same bath. I get the feeling that everyone who visits Peña gets the same reading and advice. Or maybe we all have disordered and minds and bodies and the only cure involves sitting in a giant cup of herbal tea.