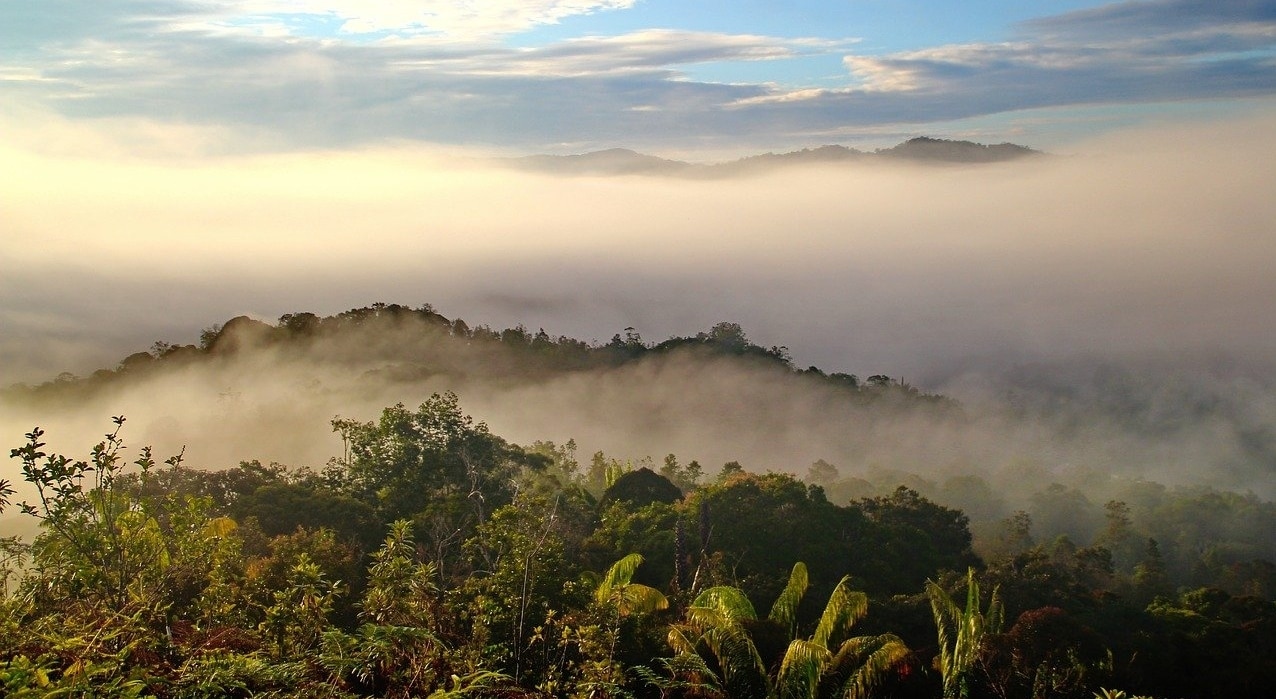 My trip to Malaysian Borneo in September 2015 began in Kuching, the capital and most populous city in the state of Sarawak (the city was formerly known as Sarawak in the 19th century). ‘Kuching’ derives from the Malay ‘kucing’, meaning ‘cats’, and the city has since become known as the ‘City of Cats’, which makes sense, given that the city is obsessed with them (the obsession most likely stemmed from the name of the city, although other intriguing explanations abound). There are cat statues everywhere, a cat museum, and a cat café. The International College of Advanced Technology abbreviates as CATS. The Chinese population in Kuching also have an affectionate love for cats because they believe the animals are auspicious. They are meant to bring good luck.

While I was aware that the city had some iconic cat statues before I visited, it was only when walking around the city that I could appreciate how cat-centric it was. So that was one element of Kuching that stood out. Another surprising and undeniable aspect of this city I experienced – although not a permanent fixture – was this engulfing thick haze. As it turns out, this is an annual occurrence, known as the Southeast Asian haze. It’s an air pollution crisis caused by illegal slash-and-burn practices primarily on the Indonesian islands of Sumatra and Kalimantan (Indonesian Borneo). These practices involve farmers cutting and burning plants in a forest or woodland so that they can make space to grow crops, including oil palm trees. The countries affected by the air pollution crisis, which lasts from late June to the end of October, include Brunei, Indonesia, Malaysia, Singapore, southern Thailand, Vietnam, Cambodia, and the Philippines.

The Southeast Asian haze occurs every year but some years are worse than others. And it just so happened I decided to travel around Borneo during one of the most extreme instances of this haze; in fact, this was apparently the most severe it had been in the last 20 years. The haze caused by these Indonesian farmers was so egregious that the Indonesian Meteorology, Climatology and Geophysics Agency (BMKG) called it a “crime against humanity”. Schools were closed, transport was disrupted (I remember flights being delayed and cancelled), and millions of cases of acute respiratory infection were recorded. 2015 was such a bad year for the haze that six Indonesian provinces declared a state of emergency. A study from Harvard University found that the 2015 haze crisis caused upwards of 100,000 premature deaths in Indonesia, Malaysia, and Singapore, and the Pollutant Standards Index (PSI), which Singapore uses to measure the level of pollutants in the air, was the highest it has ever been in the country, at 341. Anything above 300 is hazardous.

When I was in Kuching at the time, the Air Pollution Index (API), which Malaysia uses to describe air quality, was in the 90s in the city and in the 100s in the surrounding areas in Sarawak. At this level, pollution is considered unhealthy but not hazardous. Yet while Malaysian Borneo was not experiencing the kind of health hazards that Indonesia and Singapore were subject to, the effects of the haze were still obvious. What irritated me more than the toxic fumes I was inhaling was the poor visibility, which not only added a grim overlay to the city; it also made spotting wildlife a bit difficult, like when I visited Bako National Park.

This park, located 37 km from Kuching, is Sarawak’s oldest and smallest national park. But despite being relatively small, the park is home to a panoply of wildlife, including long-tailed macaque monkeys, silver leaf monkeys, wild boars, and the rare proboscis monkeys, found only in Borneo (these monkeys are notable for their unusually large, pendulous noses and pot bellies). There is also an abundance of exotic and diverse bird species. However, as I just mentioned, it was hard to spot much wildlife, owing to the hazy that also afflicted Bako National Park; and so, unfortunately, I didn’t get to spot any proboscis monkeys (although luckily I did when visiting the Kinabatangan River).

The haze continued to be an issue when I made it to the town of Semporna on the southeastern coast of Sabah, another state in Malaysian Borneo. ‘Semporna’ means ‘perfect’ in Malay, which is ironic, as I found the town itself to be far from it: I have very clear memories of rubbish being strewn everywhere and all the foul smells that go along with that. But people don’t come to Semporna to spend much time in the town itself – it’s a popular jumping-off point for snorkelling, scuba diving, and island stays. The Semporna Archipelago is widely considered to be one of the best dive spots in the world, especially the world-renowned Mabul and Sipadan islands. I had planned some snorkelling, island hopping, and hiking trips on the various islands, hoping to feast my eyes on paradisiac landscapes. However, the brilliant turquoise waters and perfect blue skies I had in mind did not materialise, given how hazy it still was in this part of the country. When I hiked to a viewpoint on Bohey Dulang Island, for example, the normally stunning view you would get of lush, tropical islands was instead covered in haze.

It was only recently that I learnt just how dire the 2015 haze crisis was. At the time, it obviously appeared troublesome and based on what locals told me, it was concerning and disruptive, but I didn’t appreciate how much Southeast Asian populations were suffering at the time. I was just focused on my travel expectations not being met and feeling disappointed. Looking back (hindsight is 20/20, of course), the effect of the haze crisis on tourists’ experiences (like my own) is really a minor blip in the grand scheme of things.

Nevertheless, an important takeaway lesson from this experience is that doing some research into a country – and the best time to travel – can make a significant difference to how enjoyable one’s travel experience is. I had no idea about the annual Southeast Asian haze before I went to Borneo and if I had, then I might have decided to visit at a time when the conditions were better (and safer). When I was living in Chiang Mai in Thailand, for instance, I became aware that slash-and-burn farming also occurred annually – between February and April – with farmers engaging in this farming method in the hills of northern Thailand, Laos, Myanmar, Cambodia, and southern China. This is known as ‘burning season’ and Chiang Mai tends to be one of the worst-hit areas in Thailand (I remember checking the levels of pollution in the city when I was there and on one day it recorded the worst levels of any city in the world, overtaking the levels seen in highly polluted cities in India, Pakistan, and China). But since I was well aware of the problem, I decided to escape Chiang Mai during the height of the burning season, travelling south to the Thai island of Koh Lanta and spending a month there.

A part of me wishes I travelled to Borneo at a more favourable time. However, I don’t completely regret the experience. After all, had I not gone, I wouldn’t have been directly exposed to the problem of the Southeast Asian haze, an experience which made me read further into the pollution crisis. This taught me a lot about this unique, cyclical problem in this part of the world. I suppose I also felt lucky that – despite the travel disruptions this haze crisis can cause – I was able to just pass through the haze and not have to live through the entirety of the crisis, year after year, as many populations in southeast Asia have to. The air pollution situation in the UK is far from perfect, but relative to the rest of the world, it feels much harder to complain about.