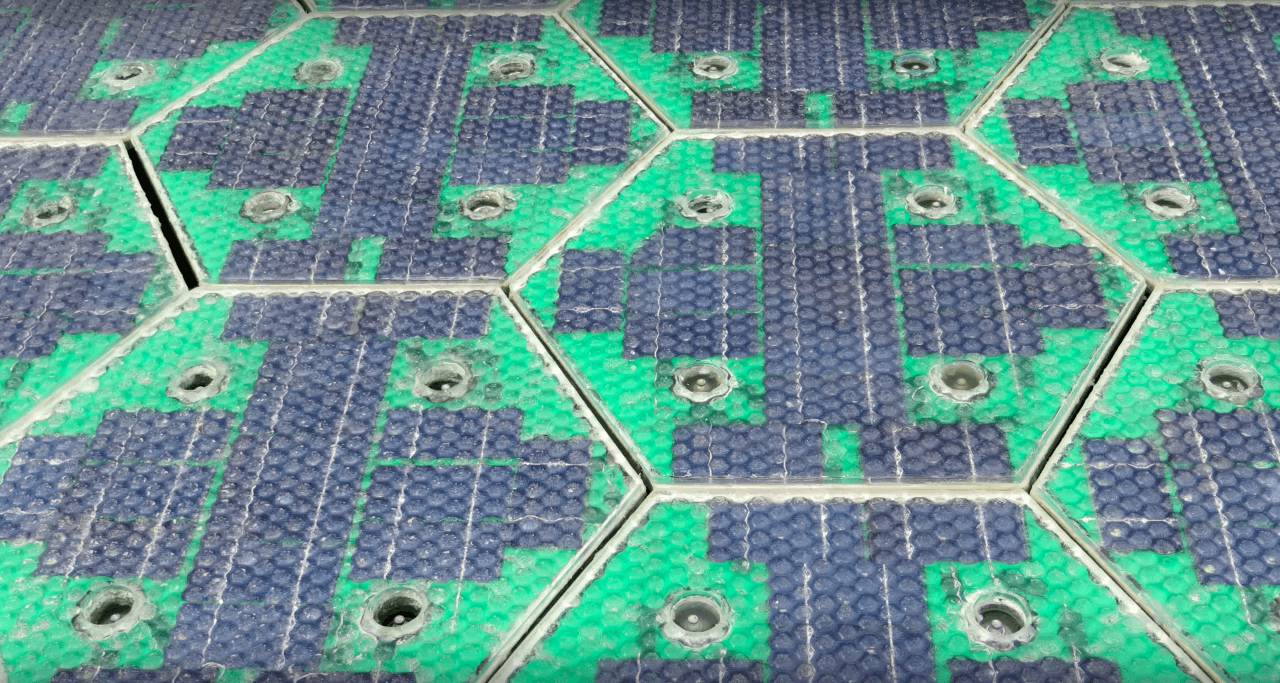 You may have seen the viral video about ‘Solar Freakin’ Roadways’, as well as noticed the media attention and hype surrounding this creative vision of roadways in the future. However, while the incredible benefits of solar roadways sound like a panacea for the world’s energy problems, the many downfalls of the technology have been severely overlooked. But first of all, let me quickly describe what solar roadways are and then summarise their benefits.

Essentially, all roadways, parking lots, pavements, driveways, bike paths and outdoor recreational spaces will be replaced with solar panels. But not just ordinary solar panels: “smart, micro-processing, interlocking, hexagonal solar units”. No longer are the days of tarmac and concrete, it is claimed. It is argued that these solar roadways will pay for themselves, because of the electricity (and therefore capital) which they generate from sunlight. This new source of clean and renewable energy will bring down energy bills, as well as enable everyone to drive electric cars, which have low carbon emissions compared to the diesel-run cars we drive today.

The list of potential benefits goes on. These solar panels are heated, preventing snow and ice forming on the road surface during the winter, which, as we all know, causes traffic delays, car accidents and injuries. In addition, taxpayers’ money won’t have to be used on de-icing the roads and pavements.

Warning signs, which normally have to be painted (and re-painted) on roads can now be made visible by the LED lights installed in these solar units. These LED lights can also warn drivers to slow down because of obstructions ahead (which these units can detect because of their pressure sensitivity).

The textured glass on the surface of these units can withstand wear from 150,000-tonne lumber trucks. Solar roadways are touted as being very eco-friendly, in that they use as much recycled material in their production as possible. Estimates are made that the US could generate 3 times as much energy as it currently uses if all roadways were replaced with solar panels.

The inventors of solar roadways, Julie and Scott Brusaw, have developed their second prototype. The couple recently hoped to raise $1m on the crowd-funding site Indiegogo, but have now beaten this goal, having currently raised $1.84m (and rising); no doubt influenced by the sensation and optimism that this vision has sparked on social media and the Internet. It is also worth checking out Scott Brusaw’s TED talk which he gave a few years ago.

But of course, in order to give a balanced perspective on this exciting technology, we have to examine the risks and costs as well. First of all, the ‘Solar Freakin’ Roadways’ video says that many jobs can be created through this new technology, which may be true, but what about the potential loss of jobs? If all the UK’s roadways are replaced by these solar units, perhaps people will have to be specially trained to carry out the maintenance of these solar units. Therefore, people who are trained in road maintenance today could see their skills become obsolete.

The famous YouTube user Thunderf00t, committed to scepticism and debunking as he is, has exposed many of the flaws of solar roadways. First of all, glass is a poor material to make roads out of. Firstly, It is expensive – coating the US road system with glass would cost many times the federal budget. Secondly, glass is too soft – even when it is textured for traction, it will wear away too quickly. And thirdly, there are also doubts about the physical properties of the glass to withstand the weight and mechanical heat stress which tarmac roads can currently withstand.

Thunderf00t also stresses that having solar panels under the road is problematic. If they are beneath the roads, then they are much harder to maintain. Furthermore, they are very fragile, meaning that solar roadway maintenance will probably have to be much more frequent than road maintenance is today. No tests have been carried out showing that these glass tiles are durable after years of tire wear from 150,000 tonne lumber trucks driving at high speeds. So how often would these tiles have to be replaced?

Glass tends to get slippery when dirty or wet (which roads often are) and no tests have been conducted for these conditions, nor has an emergency stop of a vehicle been tested in dry conditions. This could pose many safety hazards. Dirt would act like sandpaper on the glass, making it smoother and more opaque over time, simultaneously reducing its suitability as a durable road surface and lowering energy output (since less sunlight would reach the cells). Rubber residue left on the glass from tire wear could further decrease the amount of sunlight able to reach these solar panels.

With regards to the LEDs, even super bright LEDs are difficult to see at a shallow angle during strong sunlight, meaning that most roads would have to have painted on markings anyway. It is simply much more efficient for cars to have headlights and place cat’s eyes on the roads. Also, replacing painted on markings with LED markings is pointless, since these markings rarely have to be changed. And what if these LED markings fail? This would be extremely dangerous. And in terms of costs, it would be much more expensive to continually operate parking lots and the miles and miles of roadways with LED lights than with conventional lights.

It is questionable whether these solar units can generate enough heat to actually melt snow. It is much more energy-efficient, on the other hand, to just push snow off the road and grit the road. Furthermore, the claim of the use of recycled glass is extremely misleading. While there is video footage of the Brusaw couple shovelling recycled glass into a wheelbarrow, the couple knows full well that they did not use any of that glass in the construction of their glass tiles.

Roads are not made out of separate tiles for some very good reasons. Water would filter through the cracks and erode the material beneath, while vehicles rolling over the tiles will cause differential loading, causing the tiles to wiggle loose, which of course will involve high maintenance costs and safety risks for drivers. It is also important to note that when water freezes in cracks between tiles, it expands, cracks and breaks them as well.

Now, the ‘Solar Freaking’ Roadways’ video praises the money-saving benefits of this futuristic technology, but much more money (and time) could be saved if solar panels were installed above parking spaces and/or by the side of the road, rather than beneath it. Why install solar panels in a harsh environment when they are constantly being run over and flexed by millions of tonnes of vehicles? There are many more practical locations. The textured glass surface itself will also reduce the amount of sunlight that could potentially reach the solar panels.

Another problem with the supposed costs of building these solar roadways is…who is going to pay for this astronomically expensive project? Well, it would have to be the government, but more pertinently, the taxpayers. It has been argued that the solar panels will pay for themselves because they generate energy (and therefore revenue) but how long would it take to match and then surpass the initial (astronomical) investment? 100 years? More? The planet is in a dire state of affairs – what we need are cost-efficient, speedy and eco-friendly solutions, not far-fetched utopian ideas.

Many others have been re-iterating these criticisms, saying that the project is not well thought out. Aaron Saenz on Singularity Hub estimates that to replace all of the US roadway systems with solar roadways would cost $56 trillion dollars! That’s four times the country’s national debt. This estimate is based on Brusaw’s valuation of each solar unit costing $10,000 (which has a lifespan of only 20 years by the way) and based on the ~800 billion square feet of US roadway that would need to be covered. Furthermore, based on the prototypes developed, it is not clear that the panels can generate significant amounts of electricity. Another issue is how the roadways could store the electrical energy – as Saenz says: “…there would have to be some major infrastructure to translate a solar road into a continuous source of electricity.” In other words, more costs!

As passionate as the internet community is about a world paved with solar panels, this may not be the most feasible and cost-efficient way to resolve the continuing depletion of natural resources, of which the rising global population and Western consumerism are to blame for. Moreover, we have to be realistic about other factors which would no doubt impede the development of solar roadways. Oil and gas companies lobby our government to protect their financial interests and so they could easily wield this power to discourage the government from investing in solar roadways. Lobbying groups would also pay to demonise this technology. If solar roadways became the norm, this would seriously threaten oil and gas companies – and I doubt these companies would just sit back and let this happen.

As cool as Tron roadways and streets sound, we have to take into account the facts and counter-arguments. Solar roadways are not necessarily a crackpot idea and indeed I hope that the Brusaw couple can develop the technology to make it more viable for the future. However, there are still many doubts as to the feasibility of implementing the technology, not to mention the huge costs. So, to return to the title of this article: Are solar roadways the innovative answer to our energy problems? Or are they just another environmental pipe dream? It still remains to be seen. However, I am eager to see how governments will react to this technology, as well as how the technology itself will progress in the near future. And let’s not forget – no innovation is perfect to begin with and the solar roadways idea is very much in its infancy. The potential benefits of this technology are just too great to let slip by.