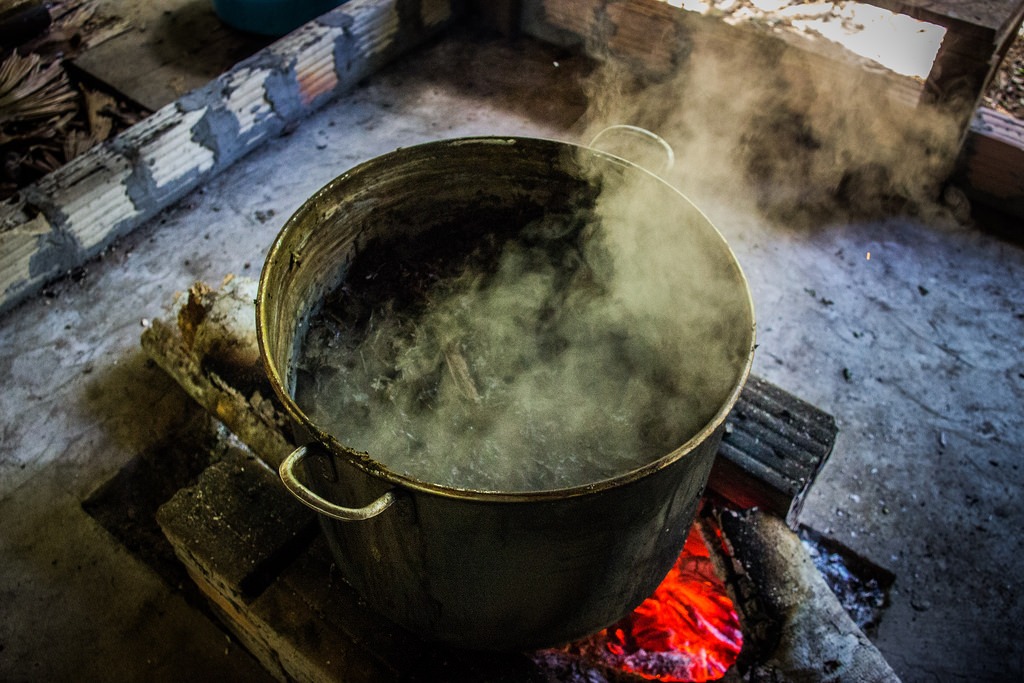 Ayahuasca, the hallucinogenic brew, is a combination of two plants native to the Amazon rainforest: the Banisteriopsis caapi vine and the leaves of Psychotria viridis. The caapi vine contains MAOIs which allow the DMT in the leaves of the Psychotria plant species to become orally active in the human body. If DMT-containing plants are taken by themselves, then the body’s store of the enzyme MAO (monoamine oxidase) will quickly break down the DMT. However, by combining DMT-containing plants with MAO inhibiting plants, the DMT becomes orally active and intense psychedelic effects take place. This is an incredible discovery and it is a mystery how the indigenous people of South America figured it out. To put this into perspective, the Amazon basin contains approximately 80,000 plant species, making it one of the most biodiverse regions on Earth. Did the indigenous tribes of South America just accidentally stumble upon this unlikely combination?

The earliest archaeological evidence of ceremonial ayahuasca use, coming from Bolivia, dates back 1,000 years, although the consumption of ayahuasca may be much older than this. Yet there is no evidence which tells us how ayahuasca was ingeniously invented from the thousands of plant species available. The indigenous people of the Amazon basin, of course, have their own explanation of this discovery which has been passed down as folklore in the form of an oral tradition. Most indigenous populations say they discovered the combination of ayahuasca because they received such instructions directly from the ‘plant spirits’. From a scientific and critical point of view, such an explanation is very dubious. It requires a massive leap of faith – to accept it is to assume that plants not only have consciousness but that plants have a non-material essence (spirit) and can communicate with humans.

If we reject this supernatural explanation for its lack of evidence and implausibility, is pure chance really the only other explanation? Well, yes and no. Of course, a large degree of chance, of trial and error, is involved; but it is not pure chance that ayahuasca was discovered. First of all, it is mistaken to think that the individual plants, when taken alone, do not have their own psychoactive properties. The caapi vine itself is known as a plant teacher and is consumed by many tribes. The caapi vine contains harmine, which is a psychoactive alkaloid. This psychoactive ingredient of the caapi vine was originally called telepathine, based on its propensity to induce parapsychological states.

Humans may have also learnt the psychoactive properties of the caapi vine by observing jaguars consuming it and showing signs of being in an altered state of consciousness, such as more playful behaviour. Tribespeople also believe jaguars consume the caapi vine in order to heighten its senses for hunting – such tribes could have copied the eating of caapi from jaguars in order to improve their own hunting skills.

Many plants also have a history of being combined with caapi for medicinal purposes. Therefore, an ancient tribe might have boiled caapi in water, with the new addition of a DMT-containing plant, in the hope of discovering a new plant medicine to treat some illness or medical condition. Imagine their surprise when they unwittingly had an intense mystical experience.

Psychotria viridis (also known as Chacruna) could have originally been employed as a purgative and intestinal cleanser. If at the same time caapi was being used medicinally as well, their paths could have crossed at some point, resulting in the monumental invention of ayahuasca. Of course, there is an element of chance involved in this discovery, but once the event took place it imprinted itself in history and created the unbroken tradition of ayahuasca use we see today. Ayahuasca was discovered against astronomical odds and probably a long process of trial and error, but as soon as that magic combination was found, knowledge about the brew may have spread very quickly among different tribes.

And this is not the first time a search for a new medicine led to the invention of a new psychedelic drug. For example, the inventor of LSD, Albert Hofmann, first synthesized LSD in 1938 in the hope of obtaining a respiratory and circulatory stimulant which did not affect a woman’s uterus. He abandoned the project for 5 years, only to re-synthesise LSD in 1943 and accidentally absorbed a quantity of the chemical through his fingertips. When Hofmann became the first person ever to have an LSD trip, that event, like the accidental discovery of ayahuasca, imprinted itself on history, catalysing the countercultural revolution in the 60s and becoming a substance of fascination in psychology and psychiatry.