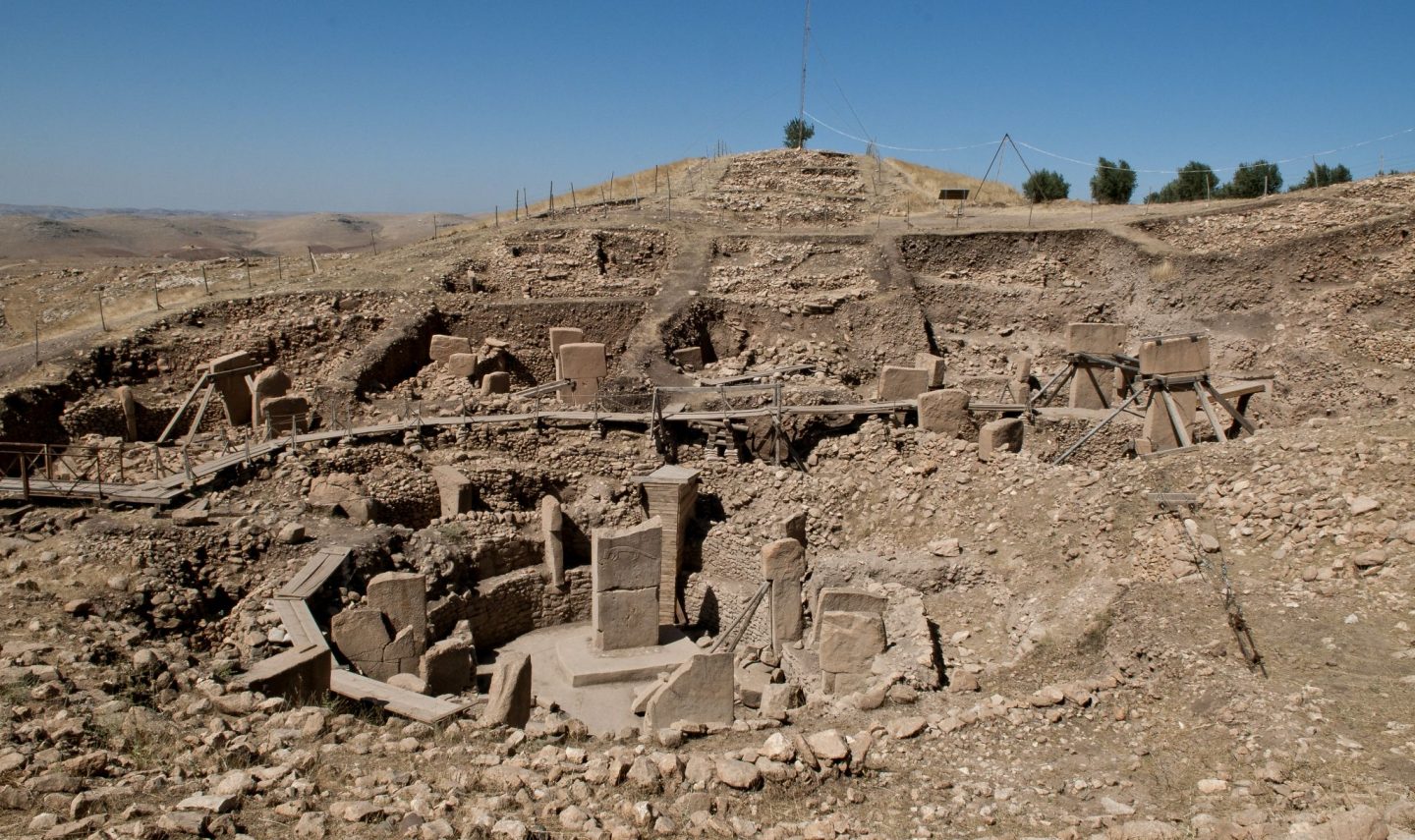 Gobekli Tepe has been dubbed ‘the world’s oldest temple’. This archaeological site is located 6 miles from Urfa, an ancient city in southeastern Turkey. Based on radiocarbon dating techniques, this structure is over 11,000 years old, which astonishing, because it means that Gobekli Tepe is 6,000 years older than Stonehenge. 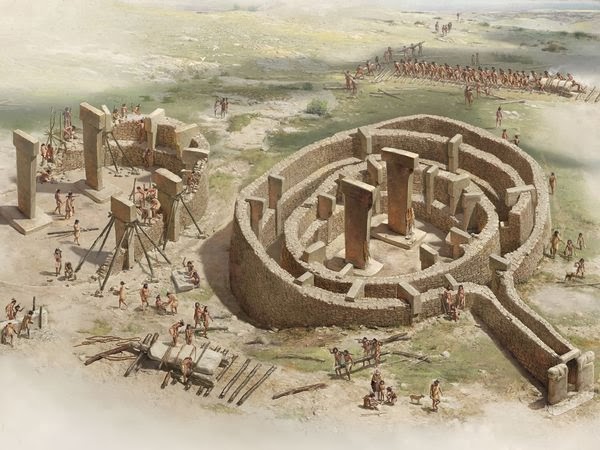 The temple consists of huge T-shaped obelisks carved with lions, vultures, deer, pigs, foxes, birds, boars, spiders, scorpions and snakes. Professor Klaus Schmidt, who was the excavation leader behind the site, said: “This series of sanctuaries is the oldest known monumental architecture.” He goes on: “Maybe burial was already part of their concept from the very beginning.” Below the ring of the obelisks is a floor of hardened limestone – Schmidt is betting that below that floor is a burial site. He has also declared the site the “first human-built holy place”.

The practice of burial is a ritual which may be the first intimations of religion. It suggests that whoever built the Gobekli Tepe temple and visited it for burial rites may have believed that a person’s identity extends beyond death. Burial would also serve the purpose of strengthening the group’s memory of the deceased.

This impressive ancient structure was built by people who had not even developed metal tools or pottery, but who managed to construct and fortify these huge obelisks by using flint tools and pure manpower. Each stone pillar weighs around 7 tonnes and would have required hundreds of workers to carve, erect and bury them. Professor Schmidt contends that it was religious sentiments, combined with a huge mobilisation of labour, which led to the construction of religious sites such as Gobekli Tepe and the subsequent transition to civilisation. 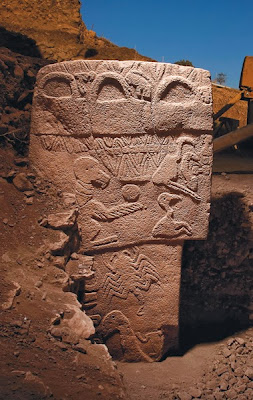 Schmidt has also named Gobekli Tepe humanity’s first “cathedral on a hill” and was likely to be a pilgrimage site for worshippers travelling up to 100 miles. There is no evidence that people lived at the site or around it, which suggests that it was used purely for religious/ritualistic purposes and not for shelter. According to Schmidt, who is also a member of the German Archaeological Institute, less than 5% of the site has been uncovered – archaeologists could dig for another 50 years and barely scratch the surface. Therefore, many more untold secrets could be uncovered.

Many bones from wild game were discovered, which the archaeologist Joris Peters says indicates that these people were hunter-gatherers and had not domesticated animals or started farming yet. The Gobekli Tepe temple, therefore, predates the agricultural revolution, which the history books tell us points to the origin of civilisation. The agricultural revolution took place around 10,000 BC in Mesopotamia, which corresponds to modern-day Iraq. 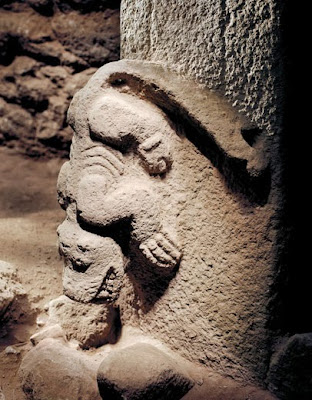 Mesopotamia is considered to be the cradle of civilisation in the West and was home to the Sumerian, Babylonian and Assyrian empires. Peters and Schmidt claim that they have found evidence of the domestication of plants and animals just five centuries after Gobekli Tepe’s construction.

Many believe that Gobekli Tepe will re-write our history books and cause a radical shift in our assumptions about the origins of civilisation. Ian Hodder from Stanford University stated that “Gobekli Tepe changes everything”. Scholars have long believed that it was only after people learnt how to farm and settle into permanent communities that temples and complex social systems could be developed. However, Schmidt argues the opposite is true – the construction of huge monoliths paved the way for the evolution of complex societies. 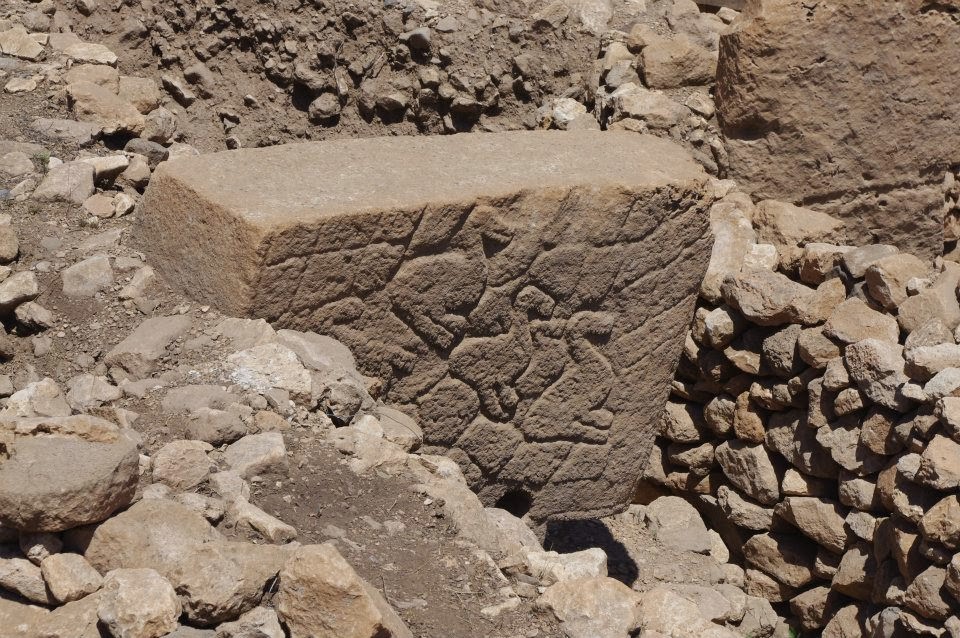 Professor Hodder also said “This shows sociocultural changes come first, agriculture comes later…You can make a good case this area is the real origin of complex Neolithic societies.” It is also worth pointing out that this temple was constructed 6,000 years before the invention of writing in Sumer (evidence for which comes from etched clay tablets dating to 3,300 BC). Religion, worship and ritual are very ancient behaviours and may be the driving forces behind the rise of human civilisation. 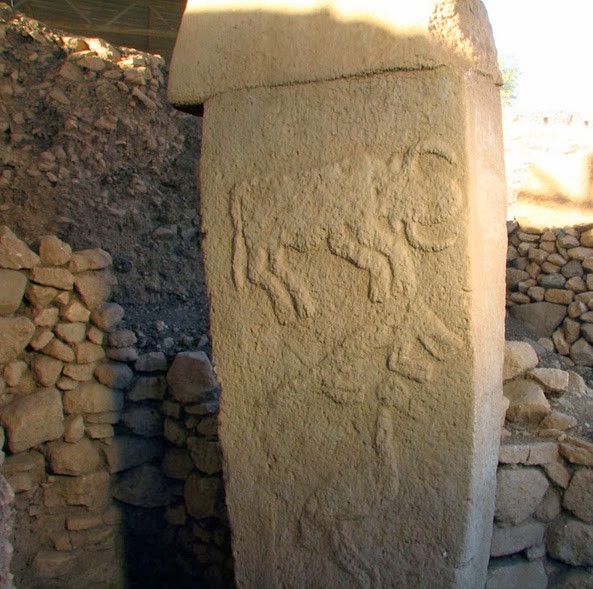 Hodder speculates that the carvings of menacing creatures (scorpions, snakes, spiders and vultures) and the position of the complex on top of a hill could indicate that these hunters were trying to escape their fears. The temple could take on a special spiritual significance in this respect, as a place of sanctuary and protection. The archaeologist Danielle Stordeur says the carvings of vultures are very telling. In many cultures, vultures are believed to transport the flesh of the dead to the heavens. Schmidt has also hinted that the site could point to a belief in the afterlife. The humanoid vulture with the sphere hovering above its outstretched wing may be some sort of deity. If the sphere represents the sun, it could even be a solar deity, deities which are found in many other ancient cultures as well, including Ra (ancient Egypt) and Helios (ancient Greece).

David Lewis-Williams, who wrote The Mind in the Cave (about cave art and altered states of consciousness), said that “Gobekli Tepe is the most important archaeological site in the world.” Indeed, it forces us to push back the date of the origin of civilisation. Some speculate that the T-shape obelisks are meant to symbolise humans with their arms outspread. If anything, Gobekli Tepe raises more questions than it answers. 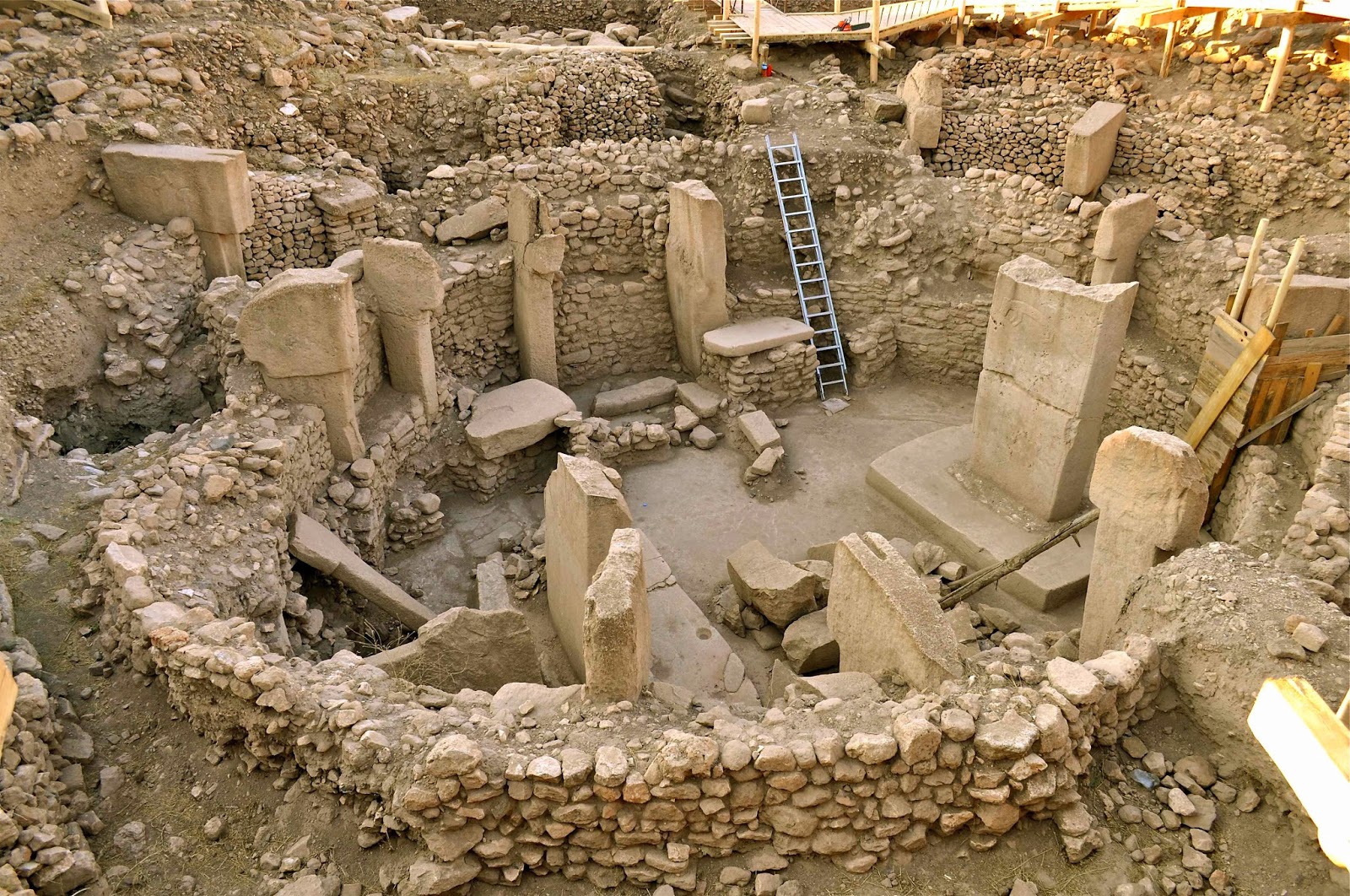 The discovery and excavation of this site have delighted many ‘alternative historians’ who are convinced that civilisation is much older than we think and that there may be ‘lost civilisations’ (such as a sunk ‘Atlantis’) which we have yet to discover. Graham Hancock is one proponent of this idea and it is the basis of his best-selling book, Fingerprints of the Gods (1995). Hancock has referred to the discovery of a comet colliding with the earth 12,000 years ago as a reason why these civilisations disappeared so suddenly. Many academics have, however, criticised this book for being full of conjecture, pseudoscience and pseudoarchaeology. Nevertheless, Hancock sees Gobekli Tepe as a vital piece of the puzzle in his worldview. 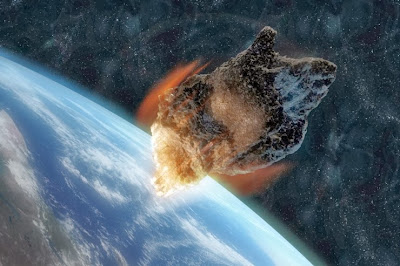 Hancock and other ‘alternative historians’ believe that the Gobekli Tepe site is consistent with the hypothesis that Egyptian civilisation is much older than we think. Known as the ‘Sphinx water erosion hypothesis’, this hypothesis says that weathering patterns on the Great Sphinx indicate erosion caused by heavy and extensive rainfall. However, this kind of rainfall could only make sense if the Sphinx dates back to the 6th millennium BC. This is 2000-3000 years older than previously thought. 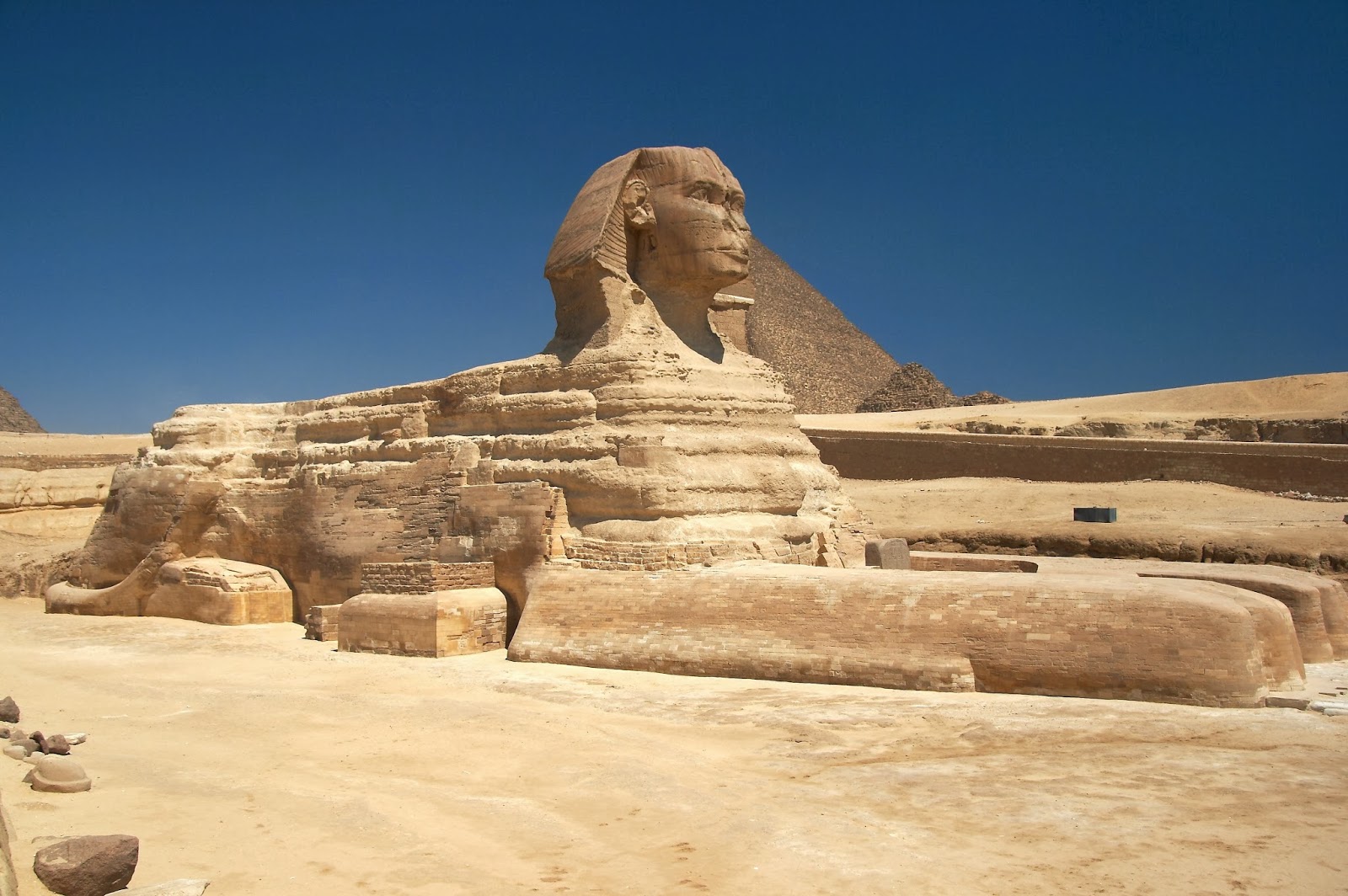 This hypothesis is supported by the geologists Robert Schoch and Colin Reader, who have studied the erosion patterns. Other proponents include the alternative Egyptologist John Anthony West and Graham Hancock. However, the evidence for this hypothesis is contentious and has received many counter-arguments and alternative explanations from other Egyptologists, archaeologists, geologists and climatologists. The evidence for the age of Gobekli Tepe, on the other hand, is much more compelling and therefore much more challenging to mainstream history.