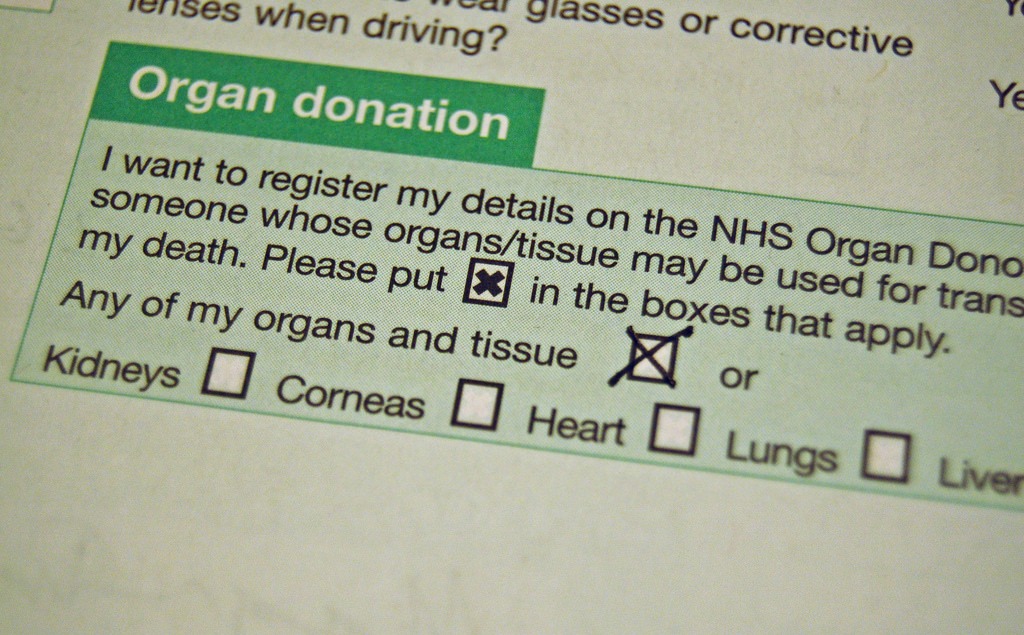 Donating your organs for transplantation, or donating your body to medical science, is a very charitable act. I myself do not believe that I will need my body or any of my body parts after I am dead (since I will not exist). I’m a registered organ donor for this reason and plan to donate my body and brain to a medical school in the near future.

I see no reason how my body or consciousness could survive physical death, so it would be an extremely misguided and selfish act to deny someone an organ who needs it, or medical students who can perfect their life-saving art by examining my body. Of course, there is the knee-jerk “yuck” response or disgust that comes from thinking about your body being sliced up and mutilated. But rationally speaking, you will not be aware that this is going on, so the thought of it, while you’re alive, should be of no concern.

For the substantial benefits and zero harm that organ and body donation brings, I think that everyone should do it. But there is an important distinction between persuading and convincing someone to do something and forcing them to do it. I would argue that it is impossible for a good action to be compelled – all acts of charity, which includes organ and body donation – should be voluntary and made with consent.

Admittedly, if organ and body donation was compulsory, or if there was an “opt-out” option, this would save many more lives. And since there is no rational objection to make this donation, why should it not be made compulsory? Should the law not be based on reason? Well, it should, but a great harm would be incurred if organ and body donation were made compulsory. This harm would be the erosion of our civil liberties.

Ultimately, we have a right to self-ownership – our bodies belong to us privately; they are not the property of the State. Even if we cannot recognise this right once we are dead (since consciousness will cease), we are still entitled to decide what happens to our bodies when we are alive. In the same way, when we are alive we decide what will happen to our money and assets when we die (with the exception of Inheritance Tax).

Sure, it may be more beneficial if all of the inheritance money went to charitable causes, but that decision should be made by the individual who owns the money. Once again, you should not (nor do I think you can) force someone to act morally. Personal choice, which is at the core of any free society, should not be violated.

Another civil liberty under attack from compulsory organ and body donation would be freedom of religion. In an ideal secular society, all religious beliefs and practices, so long as they do not involve direct harm to others, should be tolerated. Most religions, denominations and sects actually encourage organ donation for the welfare that it can bring to others. Most tend to agree as well that the decision must come down to individual choice. But for particular religious groups (such as the Jehovah’s Witnesses) or people with certain views on the ‘afterlife’, organ or body donation does not sit well. Some people just believe that they will need their body after they are dead. Now, this religious or personal viewpoint may not deserve respect or approval, but it should be tolerated nonetheless.

Other people (although probably not many) may choose not to donate their body so that it can be cryopreserved (preserved using low temperatures). They hope that technology will be advanced enough in the future that they can be brought back to life. This act of choosing not to donate your body may have a rational basis to it. If the information in the brain can survive brain death, then it is theoretically possible to re-animate the cryopreserved person back to how they were when they died.

People may also make the personal choice not to donate their body to medical science in order to fulfil the social custom of burial. Burial is seen by many to be a vital component of any funeral and it can provide comfort to the deceased’s family and friends. The astrophysicist Neil DeGrasse Tyson also made a poetic argument in favour of giving your body to the Earth. In this discussion with Richard Dawkins, responding to a question from the audience about his views on death, he said: “I would request that my body, in death, be buried, not cremated, so that the energy content contained within it gets returned to the earth, so that flora and fauna can dine upon it, just as I have dined upon flora and fauna throughout my life.”

In conclusion, there are many ethical and sensible reasons to donate your organs and body, so it should be encouraged. However, in recognition of our civil liberties, it should not be made compulsory. Even though the world’s major religions describe consciousness existing after death (in the afterlife or through reincarnation), they thankfully support organ donation as an act of charity.

Unfortunately, because of religious burial rituals, not all religions are happy with the idea of a full body donation. For example, Jewish law prohibits desecration of the human body and in Hinduism, there is mandatory cremation upon death (for which you obviously need the body). Despite this, there is still debate on this issue within religious communities and among religious authorities, which can be read about here. Hopefully, reason and considerations of welfare will win the debate. And on a final note: the idea that doctors will be less likely to save your life if you’re a registered organ donor so that they can harvest your organs, seems to be a myth.