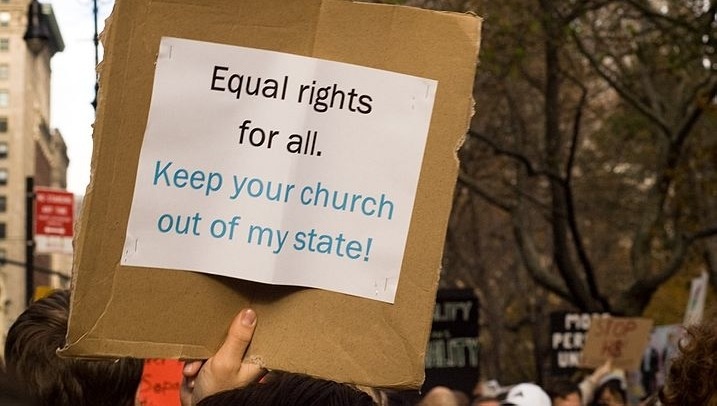 Thomas Paine (1737-1809) was born in England but later migrated to America. His two pamphlets Common Sense (1776) and The American Crisis (1776-83) would be highly influential at the beginning of the American Revolution. Common Sense supported America’s independence from England, while The American Crisis inspired the Army which was to fight for that independence. But Paine also had some strong opinions when it came to the subject of religion and its place in American society. These views were expressed best in his book The Age of Reason (1794-96).

The book follows in the tradition of 18th century British deism. Deism is the belief that God created the Universe but now no longer has any role to play in it. Deism stresses that reason and observation are enough to determine the existence of God. Revelation (God revealing himself to individuals) and authority were not considered a good basis for establishing the existence of God – so supernatural events such as miracles and authoritative texts such as the Bible were not usually respected by the British deists. They did not take issue with the idea of God, only organised religion which, after all, is a purely human invention.

Deism was born out of the Enlightenment and thinkers like Thomas Paine believed that God gave us reason because it helped us to find out the truth. In his own words: “The most formidable weapon against errors of any kind is reason.” However, the views expressed in The Age of Reason were considered blasphemous in both England and America. Even 80 years after it was published you had people like Theodore Roosevelt described Paine as a “filthy little atheist…that apparently esteems a bladder of dirty water as the proper weapon with which to assail Christianity.”

The book Reason the Only Oracle of Man (1794) written by Revolutionary War hero Ethan Allen, would express similar views on religion. Allen argued that priests in Christianity are tyrannical because they aim to undermine reason; it’s in their interests to undermine it if they want to preserve their dogmas. In Part I of The Age of Reason, Paine explains his personal beliefs. He says, “All national institutions of churches, whether Jewish, Christian or Turkish, appear to me no other than human inventions, set up to  terrify and enslave mankind, and monopolize power and profit.” He also said that “My mind is my own church.” This belief in the danger of religion having too much power, and a belief in the value of religious freedom, was enshrined in the Constitution of the United States in 1787.

Paine would also criticise the Bible for being internally inconsistent and historically inaccurate (which it is). Paine was also offended by how tyrannical and immoral God was in the Bible. These all seem like valid reasons for there being a clear separation of Church and State – why should the State support a religion if its holy book is inconsistent, inaccurate and immoral? Paine wrote that, at the time, the State and the Church were a single corrupt institution which did not represent the interests of the people. A radical change was needed. In his own words: “Soon after I had published the pamphlet “Common Sense,” in America, I saw the exceeding probability that a revolution in the system of government would be followed by a revolution in the system of religion.”

Thomas Jefferson (1743-1826) was an American Founding Father, author of the Declaration of Independence (1776) and the third President of the United States. Jefferson had very similar beliefs about religion to Thomas Paine. He considered himself a Deist, although unlike Paine he did harbour some respect for the Christian religion and Jesus’ moral teachings in particular. He actually wrote his own version of the Bible, with all the supernatural elements taken out of it; it was called The Life and Morals of Jesus of Nazareth (1820). Like Paine, Jefferson was anti-clerical and said that in “every country and every age, the priest has been hostile to liberty.” This viewpoint would heavily influence the secular foundations of the United States.

It’s said that the Enlightenment philosopher John Locke (1632-1704) was very influential in the drafting of the Constitution. Locke argued in A Essay Concerning Toleration that the government had no business in the realm of an individual’s personal beliefs, including the individual’s own religion. For Locke, religion is something private to the individual and the government has no authority to be involved in influencing it. There must be a separation between the two. The ideas of Enlightenment thinkers such as Montesquieu and Diderot would also shape the separation of church and state laid out in the Constitution. As Diderot said, “the distance between the throne and the altar can never be too great.”

Likewise, Jefferson believed that the separation of church and state was needed in the battle against religious tyranny. Jefferson wasn’t so much focused on tyranny in the form of religious wars or inquisitions, but tyranny in the sense of one particular religion receiving endorsement by the state at the expense of other religions. When Jefferson was living in Virginia at the time, the Anglican Church was receiving tax support and no-one was allowed to hold political office if they were not a member of that particular church. Presbyterians, Methodists and Baptists were clearly being discriminated against and having their rights denied.

In Jefferson’s Notes on Virginia, he also emphasises that if a Christian denied the Christian concept of the Trinity they could even be punished with three years in prison. This eventually led Jefferson to propose The Virginia Statute of Religious Freedom, which was adopted in 1786. And it succeeded in its goal – it achieved a complete separation of church and state. It guaranteed legal equality for people of all religions and even those who belonged to no religion – the atheists, agnostics, freethinkers and Deists. What people believed was no business of the government.

This statute would be the template for the First Amendment of the Constitution, which prohibits any law respecting the establishment of a religion or any action which prevents free speech, free press and free association. The statute was vital, then, for the foundation of freedom in America. Jefferson at the time held opinions similar to those British liberals who would write after him.

He seems to support a version of John Stuart Mill’s Harm Principle when he says, “The legitimate powers of government extend to such acts only as are injurious to others. But it does me no injury for my neighbour to say there are twenty gods, or no god.” Mill would later say that the government can only get involved in people’s lives when harm is involved – no-one is harmed if their religious beliefs are offended. Supreme Court judges would later support Jefferson’s “wall of separation of church and state.” As Justice Hugo Black put it, “government must be neutral among religion and non-religion: it cannot promote, endorse or fund religion or religious institutions.”

James Madison (1751-1836) was the fourth President of the United States, one of the Founding Fathers and is now known as the “Father of the Constitution.” He was the author of the United States Bill of Rights (the first ten amendments of the Constitutions) which aimed to protect the individual’s liberty and property. He explained his views on religious liberty in his Memorial and Remonstrance against Religious Assessments. It was a bill which opposed tax supports for priests in the state of Virginia. Madison was not in favour of religion. He thought that even a law which guaranteed complete religious liberty would not eradicate all of the evils of religion. Still, he agreed that a secular government’s fair treatment of all religions and non-religion was “sufficient” to minimize the worst effects of religion on society.

As he says in the Memorial, “A just government, institute to secure and perpetuate it [liberty], needs them [the clergy] not.” Madison was afraid that if the state was to sponsor or favour the established religion then, “the majority may trespass upon the rights of the minority.” The same view was expressed by John Adams, the second President of the United States, who used the term “tyranny of the majority” to describe it. This fear would later be found in Alexis de Tocqueville’s Democracy in America (1835) and in John Stuart Mill’s On Liberty (1859).

James Madison would come to influence many of the secularist sections of the Constitution, such article 6, section 3 which states that “no religious Test shall ever be required as a Qualification to any Office or public Trust under the United States.” Madison lived in a time when religious tests and religious oaths were necessary if someone wanted to become a politician. Even in America today, you can only be considered a suitable candidate for President if you have some sort of religious belief, preferably in Christianity.

Another way the Constitution created a secular foundation for America was the way in which in never mentioned the word “God”. Madison proposed a bill in 1791 that would prohibit all states from passing any law that would interfere with freedom of thought. But it was not until the 1930s that all states were forced to obey the constitutional guarantees of religious liberty and separation of church and state – so it took 140 years for Madison’s bill to get passed.

Madison’s belief that government should be neutral to religion was reflected in many of his political actions. He helped to defeat a bill which would give tax dollars to “teachers of the Christian religion” and he approved of legislation that would let mail be delivered on Sunday, the day of rest. Madison’s secular views can be found in many of his letters as well. He said in a letter that “religion is essentially distinct from civil Government…that a connection between them is injurious to both.”

Madison was also against chaplains being appointed to Congress and the government designating certain days in the year for religious worship. Although Britain is considered less religious than America, in many ways we are less secular. Chaplains, who are unelected, have seats in the House of Commons and each sitting begins with prayers from the Christian faith.

The Fundamentals of Freelancing …