So earlier this year Dutch scientists used stem cells to create strips of muscle tissue, which many are claiming is a sign of greater things to come – the mass production of lab-grown hamburgers! An exciting prospect…but for who? Well, potentially, everyone.

At the moment it is estimated that with current techniques, the cost of producing a fully-fledged hamburger will run you £200, 000. But not to worry, as soon as the technique has been mastered and improved, the cost will go down significantly. So much so, that in the future, some predict, it will be far more cost-efficient to artificially grow meat than to rear cows for slaughter.

As it stands, it is highly inefficient to produce meat the old-fashioned way, in that it takes 100g of plant protein to produce only 15g of animal protein. I personally think it would be more efficient to eliminate meat from the picture entirely and keep the 100g of plant protein as it is, without cycling it through livestock or using it to artificially grow meat. However, there is a high demand for meat.

By growing meat in a lab, costs can be cut and, more importantly, there could be an end to the meat industry in sight. Good news for livestock, good news for vegetarians and vegans, and good news for the meat-eaters who could see artificial meat becoming cheaper than its traditional counterpart. Of course, some may argue, myself included, that it would be more effective on one’s health, on the welfare of animals and on the environment to replace plant protein with animal protein completely. But still, synthetic meat seems to have more advantages than meat which used to be alive and well.

The important question is, would I eat synthetic meat? Well, if I could be sure that no animal was harmed in the process, I don’t see the problem in trying it, just out curiosity. 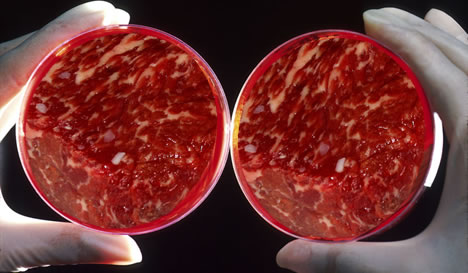 Interestingly, the Dutch scientist Mark Post has said he imagines a world 25 years from now in which real meat will have some sort of warning sign reading ‘A cow suffered in the process in the making of this meat’. Such meat may carry a huge eco-tax as well for being so detrimental to the environment in terms of the greenhouse gases released, land ruined and rainforests destroyed. People could naturally end up preferring synthetic meat since it will be cheaper, more ethical and environmentally friendly. Well, maybe producing synthetic meat is unnecessary altogether. After all, vegans have preferred a plant-based diet to an animal-based one because of these same ethical and environmental motives.